Brand new to Irvine’s exhibits is an American kestrel. North America’s littlest falcon, the kestrel packs a predator’s fierce intensity into its small body. Just like other birds of prey, the kestrel is equipped with a sharp hooked beak and long talons for catching its prey.

It’s one of the most colorful of all raptors: the male’s slate-blue head and wings contrast elegantly with his rusty-red back and tail; the female has the same warm reddish on her wings, back and tail. Both the male and the female have pairs of black vertical slashes on the sides of their pale faces — sometimes called a “mustache” and a “sideburn.”

American kestrels eat mostly insects and other invertebrates, as well as small rodents and birds.

Irvine’s kestrel arrived from Chadwell Animal Hopsital in October after he was deemed non-releasable due to a shoulder injury. We weren’t expecting it, and for now he resides indoors until we can set up an outdoor enclosure for him in the spring. All of our raptors require daily care, including cleaning of their enclosures, fresh water, training, and feeding; this little guy eats three small mice a day, which adds up quickly! Training raptors to feel comfortable on the glove and in front of people takes a lot of patience and consistent work as well. But the time and cost of upkeep are well worth it for the chance to give guests an inspiring educational encounter, and we know he will make an amazing animal ambassador for visitors in 2015 and beyond.

On #GivingTuesday, please support our kestrel! 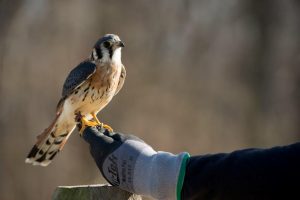 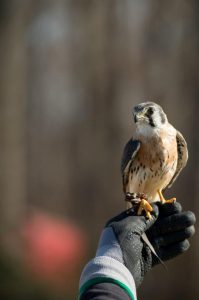 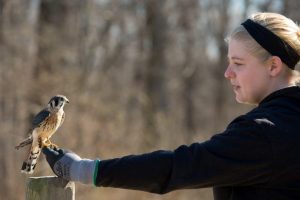