Ever wonder what animals have been standing, hopping, crawling and eating in the exact location you are standing? What better way to find out than looking for animal clues?

Animals leave many different signs to let us know they were there, including scat, tracks, shelters, fur, feathers and so much more.

Wouldn’t it be neat to know you were standing where a beautiful red fox had passed just a few minutes earlier? These pictures below are examples of evidence a fox might leave behind. 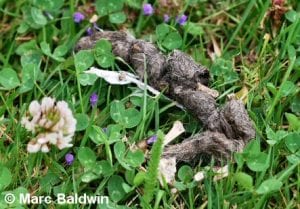 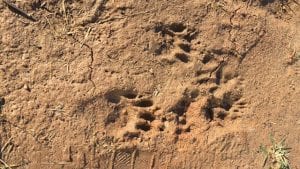 Red Fox scat (droppings) is shaped as a single cord with a pointed end. It often contains hair and berry seeds. It is about 2 inches long and ½ inch in diameter. From the tracks we can tell it is the red fox because they are about 2 inches long, the claws are visible (shown by the pinhole marks about the toes) and the heel pad is the shape of an inverted V.

The last picture shows a red fox den. They typically occupy it for the winter months to protect themselves from the severe weather. During the rest of the year they usually bed down in the meadow. However, we will know that the fox created this den if the first three feet of the main entrance are enlarged and typically dug into a tall oval shape. This allows the fox to run out of the den at a full sprint. Finally, when walking around a fox den your nose will be able to sniff it out. The den will reek of fox urine which is a pungent, musky odor.

All animals leave behind evidence, so the next time you are hiking take a look for clues!