Slow and Steady Wins the Race

With a 360 degree view, the Eastern Box Turtle exhibit is possibly the most immersive animal exhibit at Irvine.

Three turtles call the exhibit home and can be found wondering around the edge, hiding under logs, or taking a bath in the pond. These three female Box Turtles have been at Irvine for well over 15 years! They were donated after being pets for most of their lives. Having one as a pet takes commitment as they can live to be over 100 years old! Most people get bored with essentially a moving “pet rock” and thus don’t want the responsibility of caring for it anymore. Thankfully, the three lovely ladies were brought to Irvine instead of being tossed outside. Not as much can be said about their soon to be new roommate. 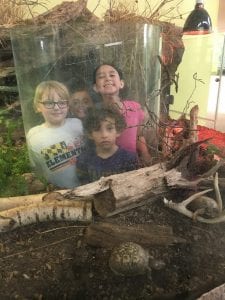 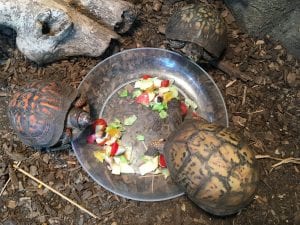 Irvine’s newest Box Turtle arrived after literally being found in the trash. Friends from Meadowside Nature Center recently discovered the female Box Turtle in a trash receptacle. Box Turtles are known for being pretty good climbers, they can scramble over rocks and logs with ease, but up the side of a trashcan, not so much – especially since she is missing part of her front leg! Due to her condition and unknown origin, they took her in as a foster. Upon contacting Irvine, we decided that we would rehome her where she has plenty of space, companions, and will be used in the ambassador program. Whether this turtle was a previous pet, or not, it is unknown as to where her home territory was. Box Turtles only live in a territory about the size of a football field for their entire life. And they have a great homing device that allows them to travel back in the direction of their territory no matter what terrain they may cross. This is why it is so important to leave turtles where you find them! During the fall months and even into the winter (with the weather staying warmer longer), Box Turtles trek across roads in search for their hibernation grounds. If you see one crossing the road and would like to help, follow these steps: First, make sure you are safe. Check for traffic and don’t endanger your life or others. Second, pick up the turtle and hold it like a hamburger. Most likely the turtle will close up into its shell like a box (hence the name) because you look like a big predator. Take the turtle to the side of the road in which it was heading! It knows where it wants to go and taking it to the side in which it came from will only make the turtle try to cross again. Finally, place the turtle a little way off the road and wish it luck!

You can visit the Box Turtle exhibit at any time you are exploring the Exhibit Hall. The new turtle will be on exhibit in the coming weeks. Then begins the search to find all four turtles in the exhibit!