With mickey-mouse ears that were too big for her face, and a soft, fuzzy body that could fit in one hand, she quickly became something of a superstar around the nature center. Having been orphaned at a very young age, she was hand fed and raised by a rehabilitator before her arrival, and it was obvious she was very imprinted on people. 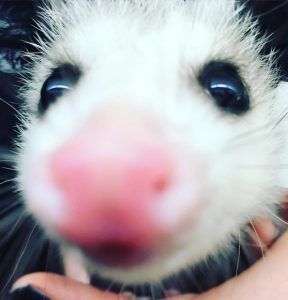 This meant that we would have the opportunity, and the responsibility, to train her and teach her good habits as an educational animal from the start.

For me, as the animal care coordinator, this has been a very interesting and rewarding experience. Many of our animals come to the nature center as adults, with pre-existing habits or behaviors that may not be the safest or healthiest, and are not easy to change. The opossum arrived at about 3 months of age, and was just starting to really explore and learn about the world, which meant that all her experiences with us at the nature center would mold her for the future.

Building a good foundation of trust with people was the biggest focus over the past few weeks, and probably the easiest part!

She had already been human handled for much of her early life, so it wasn’t hard for her to associate food and comfort with myself and the other nature center staff. Unlike a wild opossum, she enjoyed being around people, climbing up on shoulders, napping in laps, and even riding around in hoodies (when she was small enough). 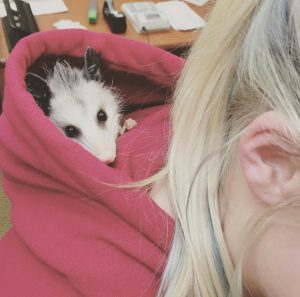 Hanging out in the hood 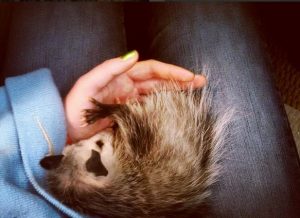 The tricky parts of preparing her for her future as an education animal came with “cute” habits that eventually could turn out harmful.

For example, when she was younger and hungry she would playfully reach out and try to grab any fingers wiggled in front of her–adorable, and silly, but we quickly realized that this could result in her associating fingers with a tasty treat. And with 50 teeth in her mouth, it was not a good idea to encourage any kind of nipping/grabbing behavior.

Now that she is six months old, and technically an “adult”, we’ve moved towards training her to walk with a harness and leash rather than being carried around and riding on shoulders. She’s had a few short visits with our preschool and co-op groups to get her used to being in front of strangers with new sounds and smells, and she is just starting to go on classroom outreaches offsite. 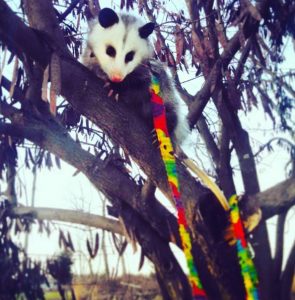 In the spring, she will hopefully be making her official debut in her outdoor enclosure by the aviary! Be sure to stop by the nature center and participate in our public programs, where you may get a chance to meet her!