Maryland has been home to stinkbugs for a long time.  I mean, a really long time.  Maryland has many native stinkbugs, from brown to green to red and black.  Some are even predatory, feeding on plant pests.

The invasive brown marmorated stinkbug is the one that has gained notoriety, however. If you live in the Baltimore area, you’ve seen them and you probably do not appreciate their presence. They are the perfect definition of an invader and are destructive to both crops and households. The number can seem hopeless to overcome, but did you know we have a tiny ally in this battle?

It’s amazing that the media heaps attention on a negative bug while ignoring an animal superhero in our midst. You can’t blame them, though, when this critter is as small as a coffee ground as an adult. The animal in question is the parasitic wasp of the family Platygastridae.

There are over 500 species of this type of wasp. The species we are speaking of lay their eggs inside the eggs of stinkbugs. The wasp egg will hatch inside the stinkbug egg as the mother wasp stands guard. Eventually, the larval wasps will morph into pupa and finally fully grown adult wasps. They will emerge from the stinkbug eggs as though they belong there! No stinkbugs are to follow – and that is to our benefit. 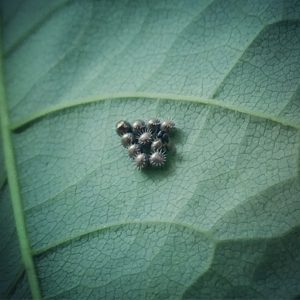 A platygastrid wasp on stinkbug eggs

Look carefully to see the wasp walking around on the eggs. It will leave a scent and guard the parasitized eggs from other wasps and predators.

For more information, check out this study being conducted by UMD that could impact the future of pest control in corn and soybean fields: USING FLOWERING PLANTS TO HELP PARASITIC WASPS ATTACK STINK BUG EGGS