It may seem crazy, but SNOW just may be on the way to Maryland soon! SNOW is the American Birding Association’s code for snowy owl and there have already been many sightings around the great lakes this year.  This could mean a big southerly push by the largest owl you can see in Maryland.

Like many birds, snowy owls may migrate from their summer breeding grounds to wintering grounds. This usually has to do with pursuing an abundant food supply. While there are areas north of Maryland where snowy owls are annual visitors, here they are considered irruptive.

An irruption typically occurs during a population boon.  The thought of experts is that a bountiful food supply (primarily lemmings) during the breeding season in the high arctic tundra results in a higher survival rate of snowy owl chicks. With more chicks surviving, the new recruits must disperse further in order to find an adequate amount of food with less competition.

It is a great treat to see a snowy owl in Maryland. The last big irruption was in the winter of 2013-2014, and it was a doozy! It is a winter birders will be talking about for some time. Snowy owls were being reported everywhere from the middle of the city in Washington D.C. to Ocean City’s beaches to farmland in Frederick. They even graced the Georgia islands with their presence! These owls are diurnal, so when you do find one you may get to watch it roost, fly, hunt, and preen. Keep an eye on news reports or better yet check out eBird’s homepage for updates. 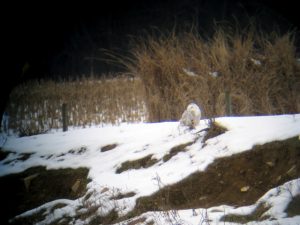 A snowy owl seen on a farm in Harford County in December 2013 – a mega year for snowy owls!

Want to learn more about Maryland’s owls?  Come to the Owl Lunch and Learn November 10 or Owl Moon March 11.