How to Rid Your Home of ‘Pane-Killers’ 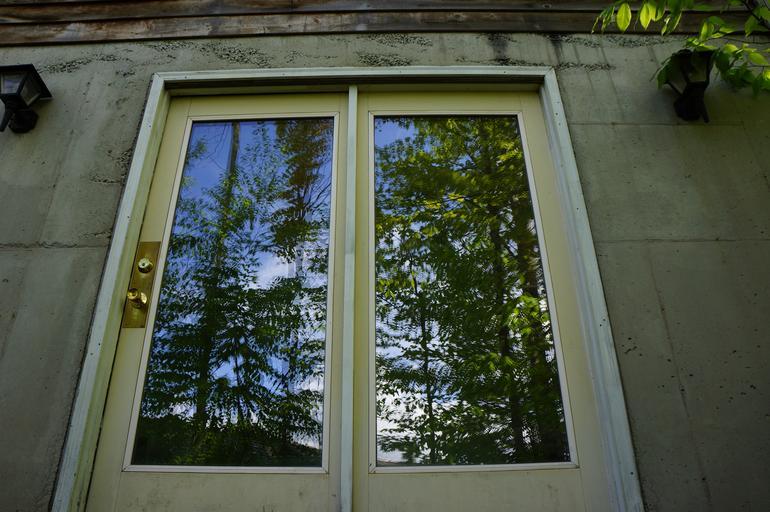 As noted in our last blog, an enormous number of wild birds die each year from collisions with glass windows.  Researchers currently estimate that between 300 million and a shocking one billion birds suffer this fate annually in North America alone!  This means that between 5 and 10% of all North American birds die every year by colliding with structures that we have built into what used to be natural landscapes.  Only habitat loss and feral cats are bigger factors in the well-documented decline of most of our avian species over the past 50 years.  During the past half-century, we have seen a 29% drop in the overall number of birds, and close to 80% of the species on our continent are significantly less common today than they were in 1970. 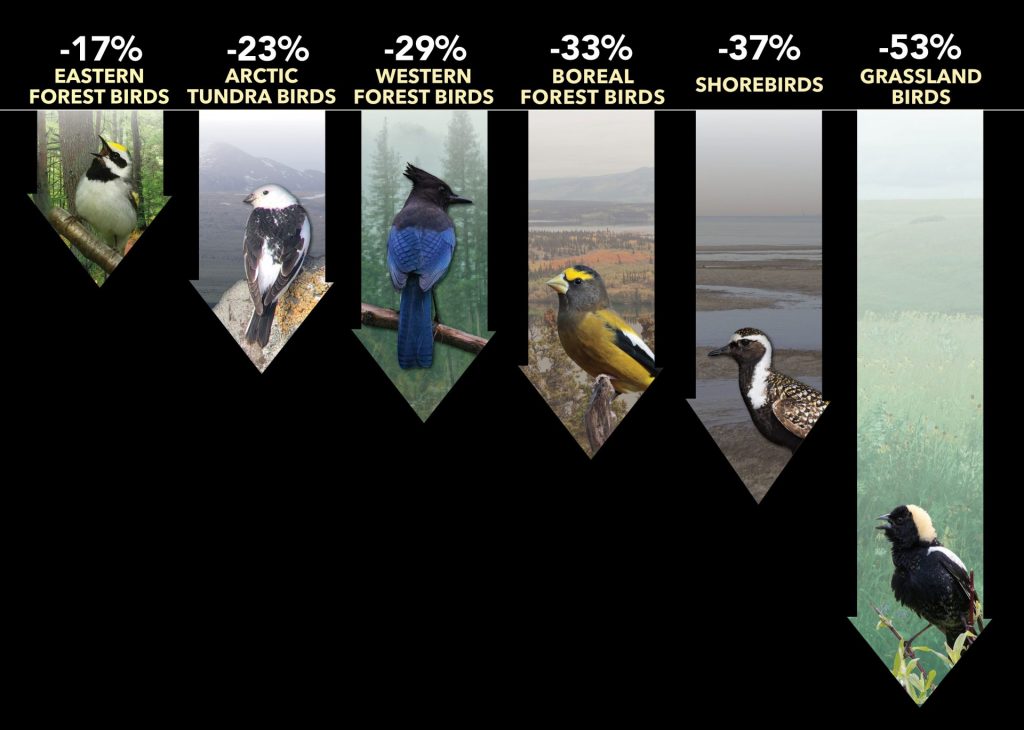 As the National Audubon Society and many other conservation-minded organizations have been appealing to any and all readers since September, when these latest figures were first published, clearly this a widespread ecological crisis.  If we hope to reverse the alarming trend toward major losses in our biodiversity, we, on the individual, community, and societal levels, need to take immediate action.  But can ordinary citizens really make an impact?  Habitat loss occurs on such a grand scale.  We’re not the ones clearing farmland to build mega-stores or chopping down rain forests for cattle grazing.  And migratory collisions occur on city skyscrapers, tall satellite towers, and huge wind turbines, not small suburban homes.  Right?

Actually, that’s not entirely correct.  While it is true that certain large buildings, because of their orientation to the rising or setting sun, their proximity to trees, or the type of glass or lighting used in their construction, may be particularly problematic for flying birds and lead to an unusually large amount of avian fatalities, window strikes are not just an issue for urban settings or modern architecture.  Roughly half of all collisions with glass take place in ordinary single-family homes.  Fortunately, there are small steps each of us can take to rectify not only how dangerous our own houses are for the birds that visit our yards, but also to implement small changes in our cities which will save thousands of birds’ lives by discouraging them from migrating through the middle of urban areas. 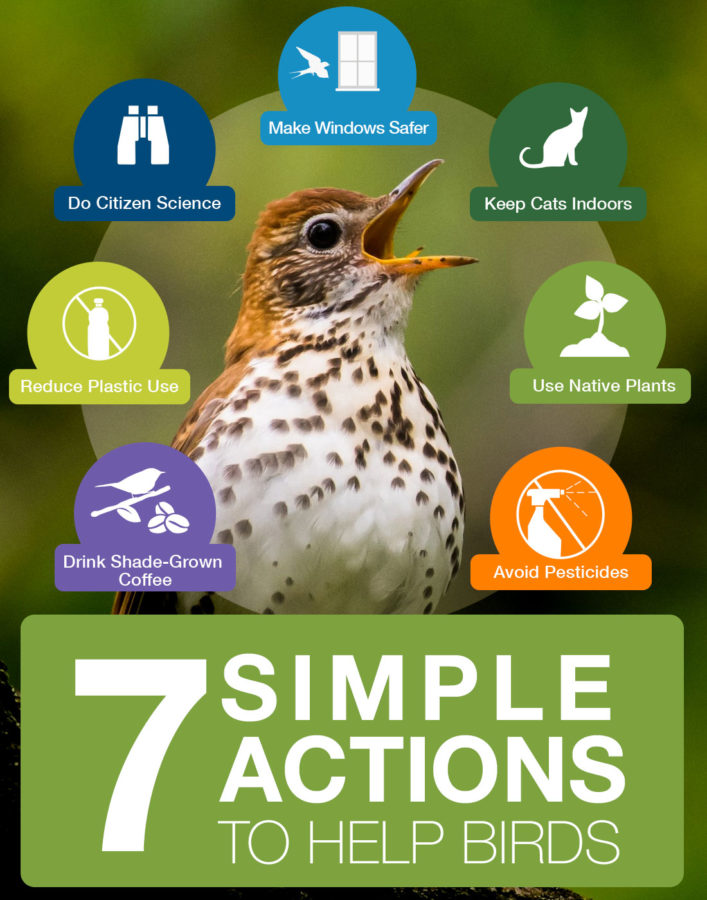 To fully understand the problem, I’d suggest investing nine minutes in watching a simple, well-made video put together by students and faculty at Portland State University in Oregon about six years ago.  It addresses both the small-scale changes that individual homeowners can make, as well as the group advocacy required to encourage local companies and governments to alter existing urban design.  Just a few months ago, the Cornell Lab of Ornithology responded to this fall’s depressing research finding about large-scale avian declines by producing, among other media, a webpage and accompanying brochure entitled, “7 Simple Actions to Help Birds.”  Their very first suggestion is to make the windows in one’s home safer.  Closing curtains or blinds at dawn or dusk can help, as can repositioning bird feeders.  Ironically, many well-meaning citizens who are sincerely trying to help their local avifauna by providing seeds and suet through the winter months actually create situations that are conducive to collisions.  Feeding stations should be very close (< 3 ft) to windows so that the panes are clearly visible to birds at the feeders or more than 30 feet away, so that startled birds have enough time and distance to react and change course when heading toward a residence.  (For better or worse, here in the Mid-Atlantic, the Cooper’s Hawk, whose preferred diet is small songbirds, continues to adapt increasingly well to suburban neighborhoods–particularly those with active bird feeders–and the sudden presence of this raptor in a backyard invariably leads to an immediate predator-induced mass exodus from any feeding station; window strikes often result.)

The best strategy for making your home ‘bird safe’ is simply to invest in one of the growing number of affordable options of window films, which adhere to the exterior surface of the glass and provide almost no impediment to the view from the inside, yet eliminate reflections–and give the appearance of a solid barrier–from the outside.  These can vary from simple patterns of small dots or stripes to more artistic designs of nature scenes or even bird drawings.  Unlike the popular falcon decals of a few decades ago, which were minimally effective at reducing collisions, these new films all abide by the “two-by-four” rule.  Basically, songbirds are experts of navigation and the smallest among them can, according to recent research by Christine Sheppard of the American Bird Conservancy, pinpoint a narrow opening that is as small as two inches high by four inches wide in mid-flight–but no smaller.  Thus, it is far more effective to break up reflective surfaces with lots of small dots or lines that are spaced in a 2″ x 4″ array than it is to plaster one large intimidating raptor silhouette onto a big picture window.  All of the newer window films now follow this 2 x 4 spacing rule. 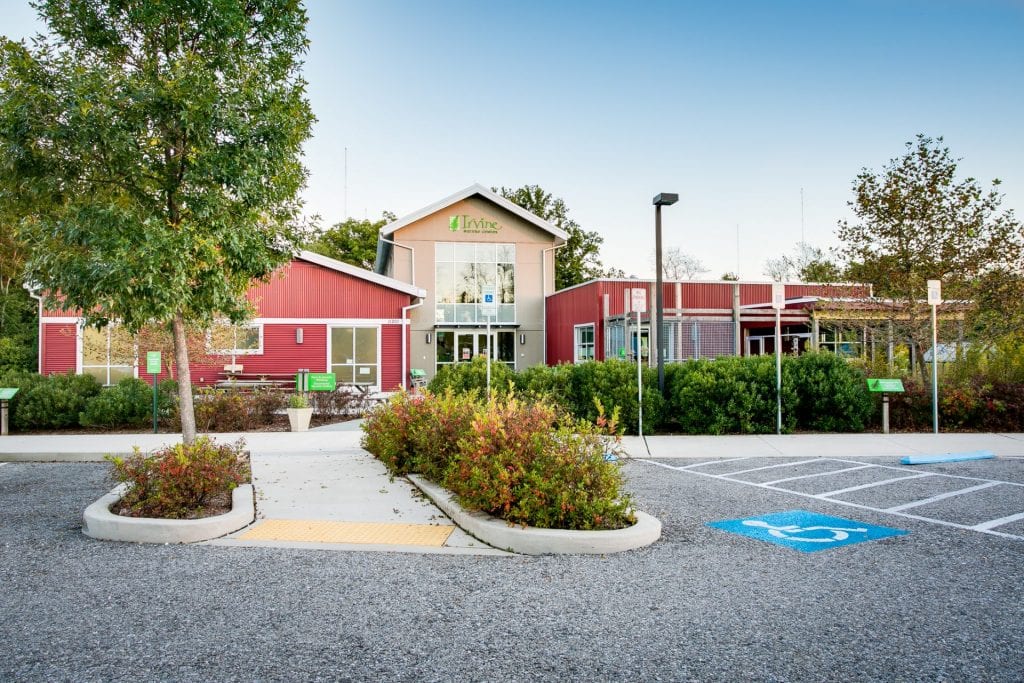 When our Nature Center was built in the Caves Valley over 12 years ago, roughly half of the windows were constructed with an inlaid pattern of dots for the very reason of eliminating bird collisions.  However, our two largest windows (those that face north and south on the Exhibit Hall) and also the windows of the Fern Rooms were installed without such a pattern.  We’d been working with our local Lights Out Baltimore group to have dotted window film installed on those windows early this spring, when the COVID-19 crisis hit; unfortunately, the installation is currently on hold but it should be in place by the summer, well before fall migration begins.  Lights Out Baltimore (LOB) also helps individual families get equipped to place film on their home windows.

Contacting LOB would also a wise place to start, if one wants to get involved in making the entire Baltimore Metro Area a little more bird-friendly in other ways, too.  This dedicated group of local environmental advocates not only promotes that newly designed architectural structures use less glass or etched glass that is less reflective and more visible to birds, but they also engage in putting forth simpler, affordable, common-sense solutions.  They encourage local businesses to turn

off lights in downtown high-rises, particularly during spring and fall nights, when the largest number of migrants are moving through our area.  They coordinate a team of volunteers, who monitor the most ‘collision-prone’ buildings in downtown Baltimore in the wee hours of the morning during peak migration times, in hopes of rescuing collision victims that are only stunned upon impact and not killed.  And they have successfully convinced local organizations like the National Aquarium, CCBC, the Baltimore Ravens, the Lake Roland Nature Council, and Irvine Nature Center (!) to put up bird-safe film on their own windows.  It’s a relatively easy fix to a massive problem and a small step you may want to consider if you’re concerned about making your own home ‘bird-safe.’