Family Entertainment for the Dog Days

So, here we are . . . firmly embedded in the depths of the dog days. There’s

nothing like late July and early August in Baltimore. You sweat when you walk out to get the mail, have trouble sleeping at night since you keep sticking to the sheets, and can’t sit down on your car seats with shorts on, for fear of first degree burns on your thighs. Sure, we’ve come to expect this here in Sweltimore. But, for some reason, it seems even more oppressive this year than most. Am I just imagining this? What’s up?

First, a few stats from a guy who loves numbers:

Late summer in the Mid-Atlantic can be brutal; there’s no doubt. And that can affect so many things–among them, everybody’s mood. Most of us are just plain cranky right about now, and we’re quick to jump down each other’s throats upon even the slightest provocation. Professors of Introductory Statistics courses love to 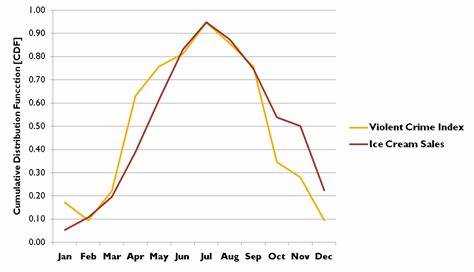 illustrate the difference between correlation and causation by citing the well-documented and often-startling fact that the homicide rate in American cities closely correlates with ice cream sales. Does a scoop of mint chocolate chip bring out our most deep-seated violent urges? Do serial killers get a sudden craving for rocky road after committing a premeditated murder? Is Mister Softee a hardened criminal? Of course not. Both of them are functions of the weather. Scorching summer days and steamy, stifling nights not only lead to more altercations in general, but also drive us to seek cool, refreshing desserts. The two events (violence and scoop sales) are correlated, but one does not cause the other. By the way, did you know that murders correlate just as well with sales of sunglasses? And ice cream sales correlate with shark attacks!

Thus, in a typical year, most of us hit rock bottom right about this time of year. For working adults with families, one of the few saving graces is the realization that the young rugrats will soon be going back to school, bringing everyone’s stress levels down! But, as if you didn’t know, this is NO typical year.  Not only are we all feeling lethargic and irritable, purely by virtue of the weather, but we’re in the midst of an unprecedented health crisis, an economic meltdown, police brutality, enormous racial tension and civil unrest, the

ugliest politics in generations, the shutdown of most professional sports–and the Olympics, hurricanes, face masks, immigrant-bashing, bushfires, plexiglass shields, gas explosions, plane crashes, election tampering, . . . shall I go on? And NONE of this is fake news. About the only positive right now is that store shelves are fully restocked with toilet paper again. There is that.

And now . . . many of us have recently found out that our children WON’T actually be returning to school this fall! Say what? More ‘family bonding’ is about the last thing on people’s minds right now. We’ve been sheltering at home for five months now. About the only pleasant thing to look forward to is time outdoors, but pools and beaches are overcrowded spreading grounds for the virus and it’s too darn hot and sticky to do much else outside. And even if it does cool off, we’re not supposed to gather with others. I guess there’s always this option.  What to do???

There has probably never been a more appropriate moment in our lives for author/artist Vivian Greene’s words of wisdom:

“Life isn’t about waiting for the storm to pass…It’s about learning to dance in the rain.”

We’re in a bad place right now . . . all of us. But for five months we’ve been trying to fight it, not accept it, act like it’s not a big deal. And that head-in-the-sand attitude, shared by far too many Americans, has made a bad situation much worse. The only way we’re gonna’ turn this thing around is to put all of our normal social urges, independent streaks, and self-interests on the shelf for a few months and start ‘playing by the rules!’ This is now about WE, no longer about me. Wear the mask. Wash your hands. Keep your distance. Don’t make unnecessary trips. And cherish this unusual luxury of quality time at home, with family, despite all of their little quirks that annoy the heck out of you and have become greatly magnified in the close quarters of recent weeks. And what better way to spend family time at home than to enjoy great flicks about the great outdoors that you miss so much but can’t really explore right now . . . due to the heat and the risk and the cost and . . .

So, to that end, I offer a ‘Top 12′ list of my favorite broad-appeal nature/wildlife/conservation/outdoors movies. This list is in no way complete (there are many good ones I’ve never seen, I’m sure) and it doesn’t rely on critics’ reviews. It is simply a short compilation of my recommendations of films that either have beautiful nature footage, reveal an accurate slice of natural history, have an important environmental message, or simply make

nature lovers smile. They are all suitable for watching by young children (some will require minor explaining in spots) and yet can be appreciated and enjoyed by adults, as well. They’re wholesome, semi-educational family entertainment. You’ve probably seen many of them, but none are terribly recent, so hopefully there’s something new for your entire family to watch on that next sultry, claustrophobic, homebound evening. And don’t forget to include the dogs; these are their days, after all.