Irvine’s exhibit hall is host to many native amphibians, the largest of which has an appetite to fit its size: the American Bullfrog!

With one of the widest ranges of any North American frog (found across the US, well into Canada and even Mexico), the bullfrog is well-known and identifiable by many. The name comes from the very deep call produced by the males, often referred to as “jug-o-rum” and sounding like a cow’s moo. They generally have a greenish head and a mottled brown body, and can grow up to 8 inches long. Sometimes confused with their smaller cousin the green frog, bullfrogs lack the dorsolateral ridge that can be seen running down a green frog’s back. 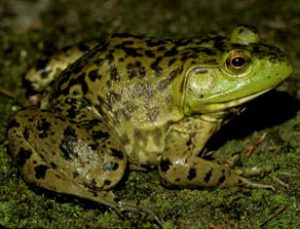 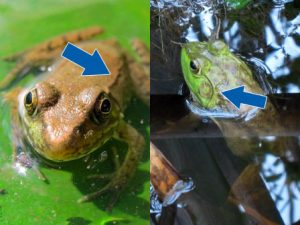 If it fits in their large, wide mouth, a bullfrog will try to eat it.

Weighing as much as 1 and a half pounds, these frogs are voracious eaters. Like other frogs, they consume a variety of invertebrates, but are also known to eat fish, other frogs, small mammals, and even birds! 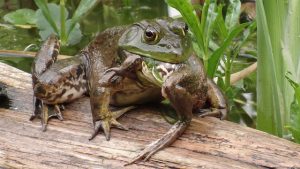 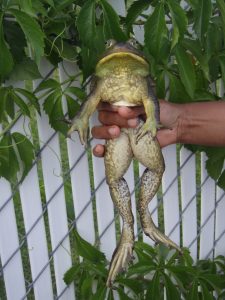 Our bullfrog on exhibit prefers super worms (a type of beetle larva), crickets, and sometimes small mice. He is best known around the nature center as a bit of a glutton, often times attempting to stalk and eat things that are not his regular foods–hoses, tongs, nets, and the occasional hand of a caretaker.

Thankfully, bullfrogs do not have harmful teeth; the upper jaw is lined with ridges that help it to grab onto its prey. They use their long sticky tongue to pull food in, and then push it down their throat using their large eyeballs–that’s why it looks like a frog is blinking whenever it is eating!