Every spring, Irvine naturalists and animal care staff field phone calls from the public with concerns regarding the safety and welfare of the many baby animals that start popping up in our shared habitats. While baby birds and mammals are usually the most common, sometimes we get questions about the sudden appearance of a more scaley, and far less cuddly, creature–snapping turtles! 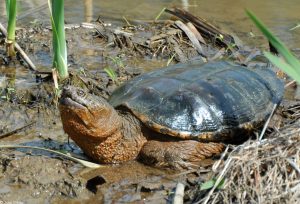 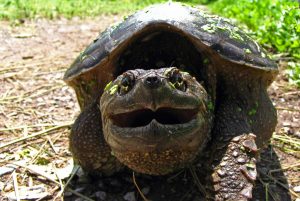 With a name fitting of their abilities and temperament, most people give snapping turtles their distance. And because they spend the majority of their time hiding out in the bottom of mucky ponds and wetlands, they are not as familiar as the squirrels, song birds, and other creatures that call our backyards and parks home.

But this time of year, encounters with reptiles, including snapping turtles, become more frequent. Birds and mammals aren’t the only ones busy raising the next generation–it’s turtle nesting season too!

Over the past few years as the animal care coordinator, I’ve received a few calls from panicked homeowners. The sight of a large, prehistoric looking snapper in their yard is both unexpected, and understandably unnerving. While most people immediately worry about the safety of themselves, their children, and small pets, the presence of a snapping turtle in your yard is not something to fear.

Like other turtles, the female common snapping turtle leaves her usual wet habitat behind after mating to find a safe place to dig a nest. They prefer to nest in loose soil, with sand or loam, digging a hole several inches deep and laying 20 to 40 soft-shelled eggs. The eggs are roughly the size of a ping pong ball, and the female will cover them up and then return to her normal habitat, leaving the eggs to incubate for a period of 2 to 4 months. 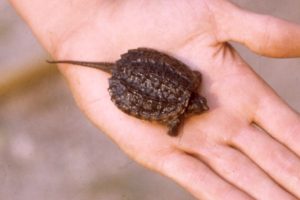 Because they are best adapted to living underwater, an adult snapping turtle is not a fast creature–they appear large and intimidating, but their speed and agility on land is greatly reduced. As the name suggests, they are capable of snapping closed their large, strong beaks at an amazing speed; but otherwise, they are slow moving.

If you give them their distance and respectfully leave them be, these turtles will continue on with their important business, and show you no harm.