Today was a fantastic day full of frog songs, pond exploration and hiking.  We began, as usual, checking out our plant phenology project at the hidden story circle.  We noticed our leaves have gotten huge!  Everyone pulled out the ruler and measured some of their biggest spicebush leaves.  I also took note of my tree, which looks like it’s forming into some sort of ash.  I’ll be sure to ID it next week when we take a closer look at plants.  Below you can see Charlie measuring some of the leaves on his plant.  They have reached 6 cm in length! After our afternoon check-in and recording our plants, Victoria wanted to check out our secret clay spot and sure enough the clay was perfect for playing with.  Just enough moisture to make it malleable but not too wet and definitely not to dry to be crumbly.  We created some wildlife with our clay and other made other structures while listening to some various frog songs.  We were hearing birds in the forest but also another strange sound.  I had heard it before so I suggested it might be a frog!  We played some frog songs and discovered it was the Gray Tree Frog singing away in the forest.  We listened to the frog songs of some other common species that can be found at Irvine, such as the Bullfrog, Green Frog (which sounds like someone plucking a violin string), Wood Frog and Spring Peepers.  All sound very different so we were able to correctly ID the Gray Tree Frog we were hearing.  Also, maybe he heard us playing our version because he got rather silent after that.  (For most frogs only males do the singing.  The females are silent as they listen closely for nearby males).

The day was warm but not too hot, just right for a hike to the pond.  We all had our boots and were ready to go.  On the way, stopped to smell the really sweet smell of the blooming Autumn Olive.  Even though this plant is not native and has a tendency to be invasive, it has a pleasant (and sometimes overpowering) smell and great tasting berries.  Before getting to the pond, however, we stopped at one of the streams that feeds the seasonal pond and sat down on a large wood walkway for snack.  It was perfectly nestled among the huge skunk cabbage.  Fortunately, the skunk cabbage didn’t ruin our appetites as it only tends to smell when it gets broken.  While eating snack we participated in a very humorous history mad libs thanks to Victoria. Finally we were at the seasonal pond.  We listened for frogs and didn’t hear any but we knew the pond was stuffed full of tadpoles, so we walked carefully.  We used small nets to see what we could find lurking below the surface.  Just one simple swoop of the net and tons of tadpoles were revealed!  We put a few in our containers to get a closer look.  The tadpoles are currently in almost every stage of metamophosis.  Some are tadpoles still with tails and no legs.  Others were growing their back legs only but were still very much tadpoles while a couple that Victoria caught deeper in the pond were froglets!  Froglets generally have all four legs growing in some stage with some of their tail left but still haven’t transformed into adult frogs yet.  Take a look in the gallery below to see Victoria holding one of the froglets in the white viewing container.

Besides frogs we found a lot of other creatures as well, such as dragonfly nymphs (baby dragonflies that live in the water and haven’t gone through metamorphosis yet), damselfly nymphs, some diving beetles and what looked like strange egg sacks.  After spending a good 30 minutes exploring the pond we were about ready to head back but before we did we used a scientific tool called a dichotomous key to try to identify one of our young insects.  These insects, the dragonfly and the damselfly also go through metamorphosis where their bodies change drastically.  A lot of young insects such as these spend a majority of their lives as juveniles living in water.  A dichotomous key is a fantastic tool that is simple to use.  It is a series of yes and no questions, with pictures, that you follow like a flow chart to find what you’re trying to identify. You can see the damselfly larvae (juvenile) in the bottom right hand corner of the key.  After returning all of our critters back to the pond, we hiked back, feet squishing with water! 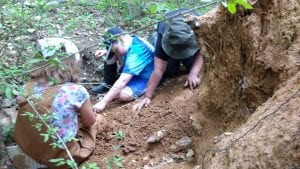 Playing in the clay 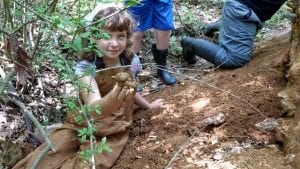 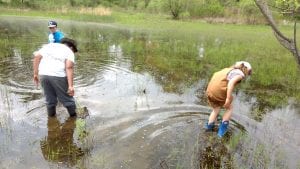 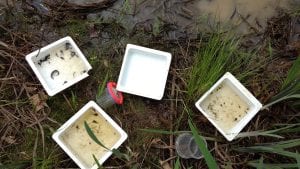 Some of the things we found 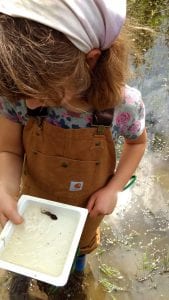 Victoria with the froglet she discovered! 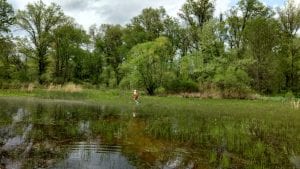 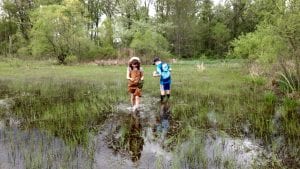 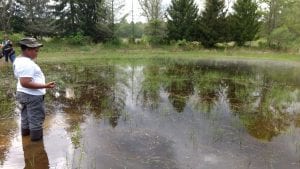 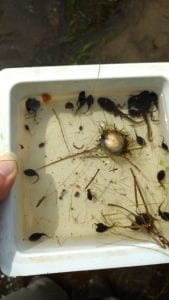 Tadpoles, froglet, other insects and the weird egg sack thing