Today was mostly about art in nature.  We explored the meadows, painted, created some nature art and discovered more about our phenology study.  Starting with our afternoon circle we got a chance to share what we did over the weekend and then we checked out our plants.  The leaves are getting really big and the forest is greener than ever.  Since today was more about art we did some leaf rubbings.  Charlie and Solace took a leaf from their plant and using a colored pencil did a leaf rubbing.  Leaf rubbings are a fun and easy way to create beautiful art.  Our leaf rubbings not only created a colorful image but Charlie and Solace noticed that on the back of their paper, the chlorophyll (the part of the plant that makes it green) was rubbing onto the back of the paper.  It made for a pretty neat image!  (Check it out in the gallery below).  On the trail in the forest we also identified the Jack in the Pulpit plant (See it below).  They look like pitcher plants, which are carnivorous, but they aren’t.  The actual pitcher is just a way to protect the flower part of the plant in the center.

After checking our plants we headed down in the meadow and explored some of the back meadows a bit more.  We discovered a new mini wetland in the back of one of the meadows, which was full of rushes and sedges.  This was also a great opportunity to review the three things that make a wetland, a wetland has hydrophytic plants that can grow in water, water present during the growing season and hydric soil.  We checked out some of these plants and noticed the ground was wet before heading back into the vernal pools along the boardwalk.

Back in the vernal pools under the cover of the forest we noticed just how big the skunk cabbage were getting!  Some of the leaves are almost as tall as Charlie and Solace now.  This was also a great place to make our nature mandala.  A mandala is a piece of art that is usually created with some sort of pattern in mind and ours were to be made from natural materials.  Nature mandalas are also fun because if they are made in nature from natural materials they can be left for others to enjoy or for you to check again and again.

We also sat down in this spot for some watercolor painting.  With only minimal directions (aka paint whatever you would like as long as it’s nature related) everyone decided to paint the scenery around them.  Solace chose to paint the stream with the sky over head, Charlie choice to paint the forest floor with the leaves and skunk cabbage and I zoomed in and painted an individual skunk cabbage.  It was great seeing all the different perspectives! After finishing our paintings we continued along the boardwalk to really get a good look at the skunk cabbage.  Check out how big it has gotten when compared to Solace’s hand?!  Even though skunk cabbage smells when you break off one of the leaves, we have been noticing that it doesn’t really release a strong odor into the air when not broken. The day was almost over but we stopped in the Ed Hut for a quick activity about food webs.  Before we had worked on food chains and learned how energy starts with plants (which take energy from the sun) and the energy moves up the food chain.  There are levels to a food chain, producers, consumers and decomposers and as you move up the food chain there are generally fewer and fewer top level predators.  A food web is a bit different and both Charlie and Solace agreed that food webs are a better representation of an ecosystem (we reviewed what an ecosystem is, it is a place where living and non living things depend on each other to survive).  A food web describes all the interactions between plants, animals and the non living components such as air, water and the sun.  Also, in a food web it shows what would happen if even one part of the food web was lost, let’s say the opossum went extinct.  That animal disappearing would affect the fox because they compete for similar food sources and having too many foxes may impact the health of the trout in the stream and so forth. S0mething I would change about this stream ecosystem food web is the fact that humans are not represented.  Humans have significant impacts (sometimes positive and sometimes negative) on the ecosystems they use.  Next week we head out to a different pond to look for tadpoles, maybe some froglets with legs and other critters as well. 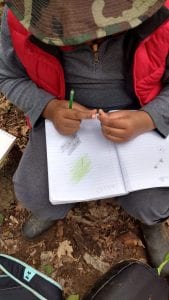 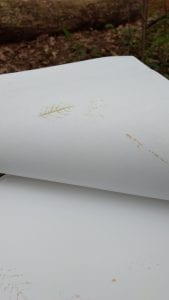 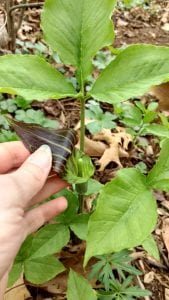 Jack in the Pulpit 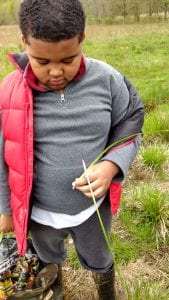 Checking out the rushes in the wetland 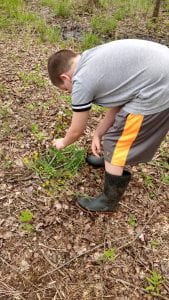 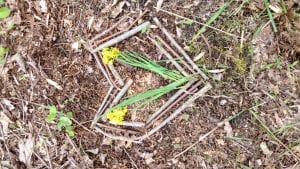 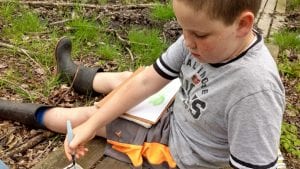 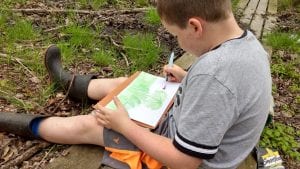 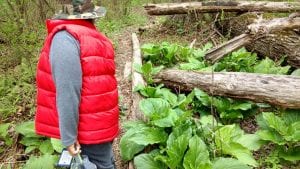 Solace with the skunk cabbage 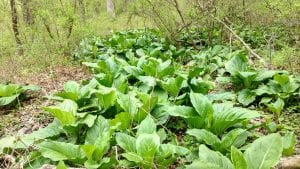 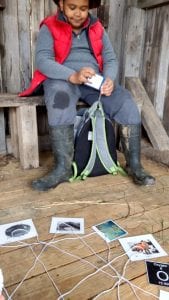 Working on the food web 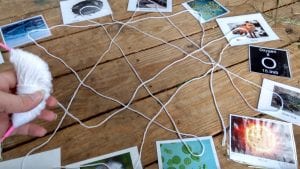