Today we continued our exploration of amphibians.  It was a perfect day to spend frog searching and exploring by the stream so that is where we spent most of the afternoon.  We stopped briefly at our meeting circle to share some of our highlights from the weekend.  We also did a quick check of our plants, which haven’t changed much and their leaves are out collecting the sun’s rays.  On our way to the stream we spotted something bright purple in the meadow.  We walked into the grass to take a look.  I asked everyone what it reminded them of and everyone agreed the leaves looked a lot like stars.  This plant is called lupin.  There are over 200 species of lupin and this one specifically is called Sundial Lupin.  Fitting, since the leaves do look like sundials. After exploring the lupin, we ventured down to the stream.  On our way to the first part of the stream we were going to stop at, we lifted one of the wood walkway boards to see if anything was hiding under it.  We didn’t find anything living but Victoria did notice a large pile of very brightly colored brown clay with a hole near it.  This may be a crayfish hole!  They actually burrow in the ground near water sources.  The crayfish wasn’t found.  Once we arrived at the stream we carefully walked up to a second board to gently flipped it up to look under it.  This is a great hiding spot for adult frogs and stream going insects.  Sure enough, we found a Green Frog!  Green Frogs are native to Maryland and when full grown can resemble the much larger Bullfrog.  Green Frogs, however, have two ridges that run down the length of their backs and have other slightly different features.  Their song is very different than a Bullfrogs too.  We have heard it a few times while down at the pond, it sounds like someone plucking a violin string, only once.  It is then repeated after a lengthy pause. In addition to the frog we found a few stonefly larvae crawling around in the stream bed.  Stonefly are indicators of a high quality stream since they generally can only survive in clean water with high dissolved oxygen levels.  Besides noting the biological (living) diversity of a water body to help you determine how healthy it is (amphibians like Green Frogs living in it is a good sign too), you can use chemical tests.  We noted quickly that the turbidity of the water (the cloudiness and haziness) was very low, the water is very clear.  Next, we got out our thermometers and measured the temperature of the water.  We checked two different parts of the stream that were relatively close to each other and both Charlie and I found it to be between 38 and 40 degrees F.  The colder the water, the more dissolved oxygen it can hold.  We did a DO test and found it was a tad low, our test only showed 4 ppm (parts per million), when it should be closer to 6-10ppm.  But, remember that it is always important to do multiple tests and different types as well.  Last, we checked phosphates.  Phosphates naturally occur in water, and it can vary by how much depending on the water’s source, the types of materials it flows over, etc.  But generally, phosphates get into the water in high amounts from soaps and detergents and other human made pollutants.  Car soap is a big culprit.  High levels of phosphates can be toxic to sensitive animals and can cause excess nutrients which leads to large algae blooms, which is also not good since it shades out aquatic plants and when the algae dies, bacteria that eats it uses all the oxygen from the water, starving other plants and animals of oxygen.  The phosphate test turned up rather high as well, but I realized after it may be because I accidentally used two tablets instead of one.  So a second test would be good!  We found the phosphates to be around 2ppm, when 1ppm or less than 1 is closer to normal for most freshwater streams.

Another activity we were working on was building our own water filter.  Knowing how to construct a water filter can be a life saver if starting a fire isn’t working right away and you need fresh water.  Primitive water filters work best when the right materials are chosen and layered in the right way.  Generally it is best to use clean grass at the bottom to prevent your sand and gravel from leaking out and then layer up with fine sand, gravel, charcoal (if you can find it to help remove toxins from the water) and continue up in layers.  The water generally needs to be filtered multiple times to ensure it is safe to drink.  Remember, that this method should only be used for demonstration, never use it to drink water from a local water body unless it is a tool being used in a life threatening situation.  We had fun watching how clean our water was as it ran through the filter! Since the frogs had vanished it was time to explore a new part of the stream.  We headed upstream and explore that part of the creek.  We also had snack here as well!  Charlie and Solace were walking around the creek bed exploring and Charlie was searching under the large log for frogs.  He didn’t find a frog but he did find a really old bone.  At first we thought it was wood, but after about 30 minutes it dried out and started to smell funny, definitely not wood!  Plus, it has some chew marks on it.  Check it out below.  It was time to hike back since we were going to spend out last few minutes looking at some native frogs that call Irvine Nature Center home and journal about our favorite part of the day.  We met a Leopard Frog and an American Toad.  We discussed some of the characteristics of amphibians and also how frogs are different than toads.  Everyone journaled about the amphibians and Solace included the water filter in one of his highlights of the day! 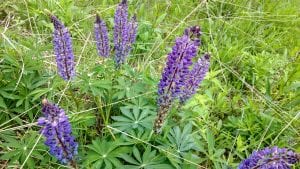 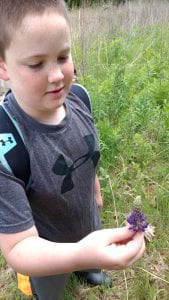 Charlie found one that had fallen off 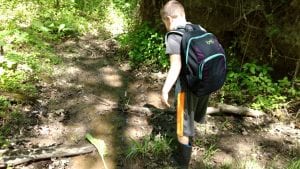 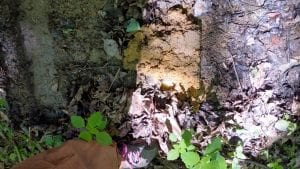 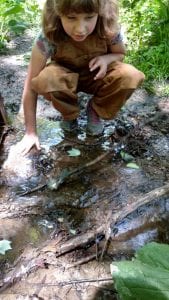 Searching for the frog 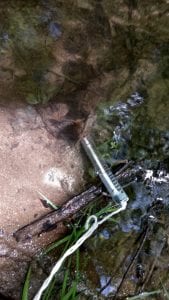 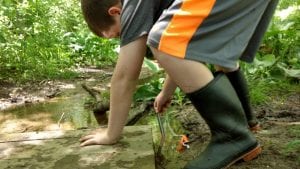 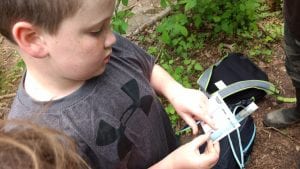 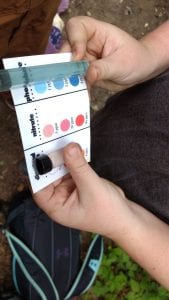 Comparing dissolved oxygen and phosphate with the chart 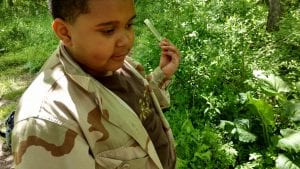 Solace is helping dissolve the tablets 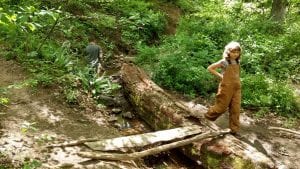 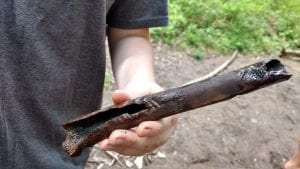 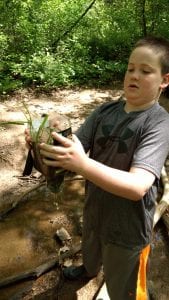 Trying out the water filter 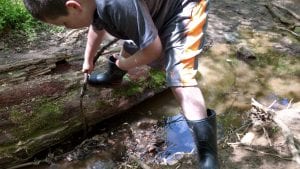 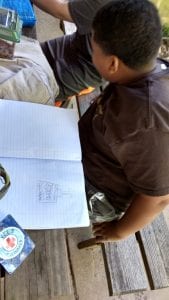 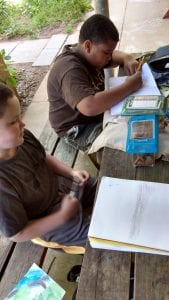 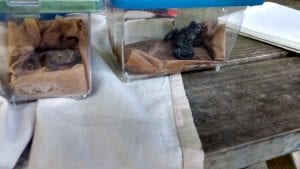 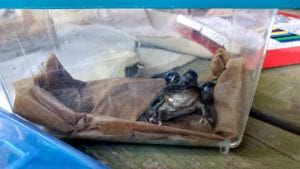