Living Off of The Land Week 5

For our 5th week, we got a new instructor Kelly that will be with us for the rest of the semester! Kelly is an awesome naturalist and will be a great addition to our class 🙂

We started out by having a small check in circle near the Woodland Garden to check in as well as meet Kelly. We then headed to the meadow to play some games!

This week we played the epic game, Ninja! You play by forming a circle and then all jumping backwards while striking a ninja pose. The game is played by taking turns sequentially to try and lightly hit each others hands in one swift move. Since you have two hands, you have 2 lives and if your hand gets struck, it is out of play. On your turn you do not have to strike, or even move towards other players.  It ends up getting really crazy because after a while everyone moves out of place and you still have to take turns in the original order! The game ends when only one person is left with at least one hand in play. I love this game because it is extremely fun, builds spatial awareness, and teaches good boundaries. It does this because you have to pay attention to lots of people, as well as be mindful in hitting fast enough to strike, but light enough to not hurt anyone.

Afterwards we explored the meadow for a bit and found a Woolly Bear caterpillar (Pyrrharctia isabella). Kelly showed us how all caterpillars like other insects actually only have six “true” legs and the rest are called prolegs. Some people believe that you can predict how harsh the coming winter will be depending on how many black versus brown segments the Woolly Bears have!

Then due to popular demand, we spent a good amount of time carving! I told the kids how if you get a strong enough stick and carve a point, you can use it to dig up edible roots! We then headed to a new part of the forest.

There we had some free play time as well as played an epic game of camouflage! There are lots of big trees and good hiding spots in that area so it was an extra challenge for the spotter.

Finally as we heading back we checked out some Poison Ivy (Toxicodendron radicans) which has many different forms and can be tricky to identify. Nearby however was a decent sized patch of  Orange Jewelweed (Impatiens capensis). Jewelweed is a really cool plant because you can use the juice from the leaves and stems to help with a Poison Ivy rash! It also has very beautiful flowers and when you hold the leaves under the water, the underside turns shiny silver!

Next week we are headed to find the Pond! 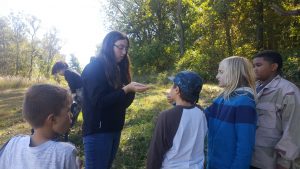 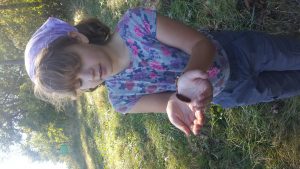 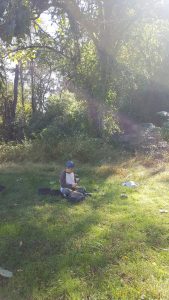 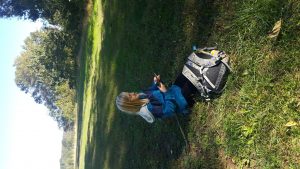 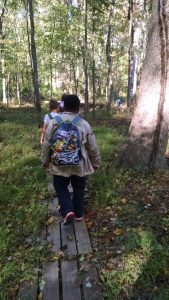