The children had such a great time exploring our new “hidden play area” that they decided to head back and explore some more.  Sometimes with children, plans don’t go as planned and we didn’t make it past the straw bales.

What started off as a quick jump, quickly became snack time. It then progressed into playtime. Since we try and keep our time together “child-led”, we allowed a group of children to continue in their games while we explored with the rest.  A trip to the stream uncovered some awesome macroinvertebrates! Before we knew it, we were turning over rock after rock searching for larvae and worms!

Back at the straw bales, we suggested a game of follow the leader: jumping, rolling, and leaping about. This entailed some discussions about good leaders and making sure their classmates can follow you! Before too long, the bales became a Ninja Course that involved ninja leaps and kicks! This may be one of the children’s favorite destinations at Irvine!

We welcomed spring with some…cold rain! This is the first time that we have had rain this year and the kids kicked off the rainy season by saving worms! As we waited for everyone, the Forest Dreamers made a worm sanctuary and proceeded to collect and save all the worms that were unfortunate enough to be on the sidewalks.

Since this was our first time out with this crew in the rain, we decided to seek shelter in the barn and then make side trips on the trails.  Catching the interest of EVERYONE was the small culvert under the road between the ponds on the way. The children quickly threw sticks and leaves into the opening and then ran to watch it come out. We practiced some counting as we timed the objects progression. The children’s excitement was PRICELESS when their stick came out.

What fun would water and mud be if we didn’t incorporate it into our play! At the barn, we gathered some mud and encouraged the children to paint with it. At one point, we had a nice game of Pictionary going on.  After we made it back to Irvine, we continued with our mud play, painting trees, structures, and even each other! Who says you need to pay a lot for a mud face mask?!? 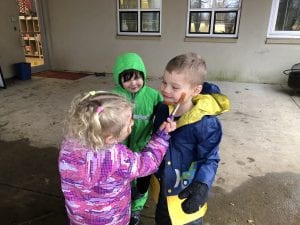