Hello!  This was a wonderful day exploring and learning about animal adaptations.  All of the animals here at Irvine are specially equipped to survive in their natural environment; as well as defend themselves when they feel threatened outside of their habitat.  We started the day by viewing and learning about a pygmy hedgehog.  They are related to but not as big as a porcupine.  This is a domesticated hedgehog species and is common to have as a pet.  With that said, they can still hurt as they are covered in quills that become rigid when they feel threatened or scared.  To protect their soft underside and face, they will roll up into a ball.  Pygmy hedgehogs will eat what they can but mainly eat insects. They have been known to eat cat food!   Students had a chance to make their own hedgehogs by decorating a template with dry leaves or by carefully cutting the quills with a scissor.

We continued our day by venturing into the woods and meadow.  Our goal was to discuss the ways that animals are perfectly designed to survive in their environment.  We did this for every animal that we saw.  We stopped by the wildlife blind and ate our snack as we quietly viewed the native birds that congregated there.  A Black-capped chickadee and  a Nuthatch were observed.  Students noticed how the birds traveled in groups to feel safer. We also noticed how quiet we had to be, so as not to scare them off. We finished our walk in the meadow. There was rumor of a persimmon tree on the Irvine property. We searched until we found it.  Students had a chance to taste if they wanted to.

The day ended when we viewed a box turtle with one of the other Earth Friends instructors.  The Eastern box turtle is especially adapted to survive on land in forest environments. When threatened, they can close themselves inside of their shell. 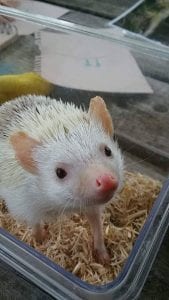 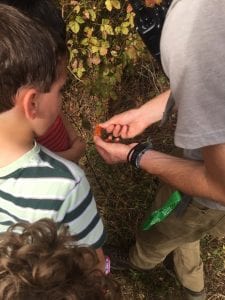 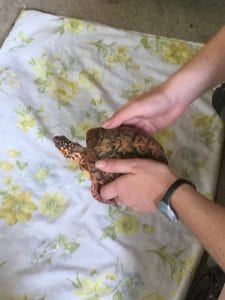 Hello!  We continued our study of animal adaptations this week by viewing reptiles.  These animals have special adaptations as they are cold blooded and cannot survive for long without an external heat source.  They are often seen sunning themselves on rocks or on trails.  We viewed a beautiful corn snake.  She was very calm and a little slow.  It was a colder, rainy day when we viewed her and we were outside.  She sensed the cold and wrapped herself up as much as she could around herself and my arm to conserve heat. We viewed her for a short time and then returned her to her enclosure in the exhibit hall.  While there, we took the opportunity to view they other snakes that Irvine takes care of.
Back outside, we read a couple of books about snakes.  While I read, students had a chance to make their own snake out of modeling clay. Some made a model snake from real life; whether it was the snake we saw or took inspiration from the posters and books we had around us.  Others made a snake up using their imagination.  They all turned out great and they enjoyed using their hands to build.
Even though it was a rainy day, we still hit the trail and students were allowed to explore. This is often their favorite thing to do.  Although we didn’t find any reptiles outside due to the cold, we did find a salamander; an amphibian. 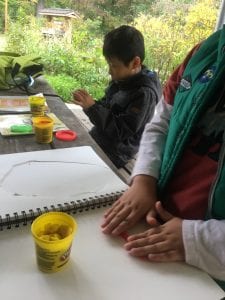 Making their snakes out of clay 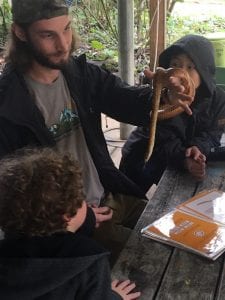 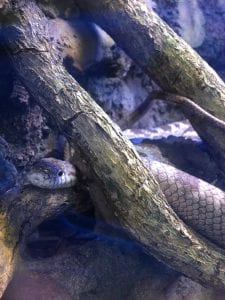