Earth Friends: Living Off of The Land: Week 1!

We had an awesome first week with the Earth Friends: Living Off of The Land class! After waving the parents goodbye, we headed to the gazebo to introduce ourselves. There we exchanged names, favorite animals, and what we wanted to do in the class. Then because talking for long periods of time can get really boring, it was time to play a game!

The game we played is called “Fire Keeper”.  One person is blindfolded in the center of a circle with objects in front of them that make noise such as keys or bells. If you want a more difficult challenge you can add quieter objects such as sticks, leaves, bandanas, etc. The object of the game is to stalk up on the blindfolded person and take the objects out of the circle without getting pointed at. If the blindfolded person hears or senses you and points at you, you have to start again from the edge of the circle. Everyone was really good at stalking despite it being really tempting to run out of the circle after grabbing an object!

After the game we had a good collaborative talk about safety and potential hazards to be aware of. Some things that came up include Ticks, Poison Ivy, Bees/Wasps, Snakes, Sun Burn, Dehydration, and getting lost. When we left the gazebo, we headed to the meadow to run around and try to catch some grasshoppers and then headed down to the creek to explore!

On the way we met a couple AMAZING plant allies! The first was broadleaf plantain (plantago major) lovingly and simply referred to as plantain. If there is one plant you should learn how to identify and use,  it is probably this one. It is anti-bacterial, anti-microbial, anti-inflamatory. It is edible despite being very bitter, has a lot of anti-histamines, and can be used as an incredible poultice! A poultice is as simple as chewing up the leaves to get the juices exposed and then placing the chewed up plant matter on a cut or sting. Plantain is astringent so it can actually draw toxins out from cuts and stings as well as help pull out oil from poison ivy! Because plantain can be found almost EVERYWHERE, including in the city, backyards and even the cracks of sidewalks, it is a great plant to learn and use. That being said, be mindful where you harvest as areas close to major roads absorb a lot of pollution and some areas are sprayed with pesticides.

It is an edible, smells INCREDIBLE, can supposedly ward off ticks if you rub it on your body and is an all around cool plant to know and spend time with since it is fairly abundant at Irvine!

Once we got to the creek it was nonstop fun as we got to play in the water as well as catch a bunch of frogs! There was even a frog kiss at one point that you can check out in the photos below! While it may seem like nothing but play, to catch a slippery and jumpy frog often requires the exercising of executive functioning and patience. You have to take your time, as well as be quick and confident when you strike to grab it! Therefore, as hard as it may be for some to believe, catching frogs can strengthen neural networks so your children can be more patient and confident in other areas of their lives! That is the beauty of nature connection <3

After a lot of fun at the creek we headed back for pickup with a short closing/gratitude circle at the gazebo. Once we got back the kids self organized a camouflage game in the outdoor classroom while waiting to be picked up. I can already tell we are going to have an awesome semester together! You all have amazing kids!

May the wildness be with you…. 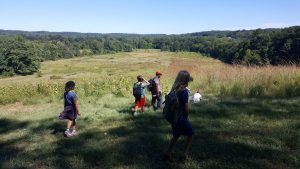 Catching grasshoppers in the meadow! 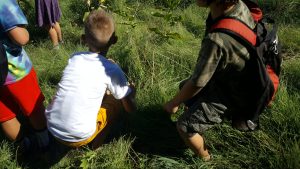 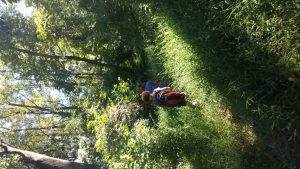 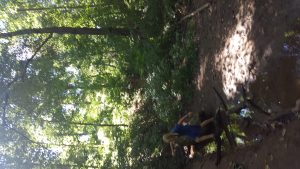 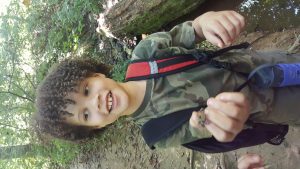 Check out my new friend! 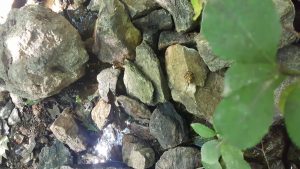 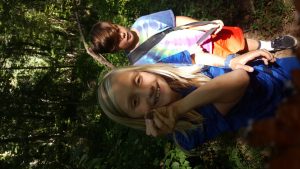 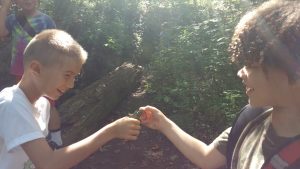 Ps. wordpress is acting funny with rotating pictures. I will update them as soon as I find a solution! Feel free to download them and rotate yourself in the meantime.