Today was our third Biomimicry class and we had a blast exploring the ponds, finding frogs and doing a really fun experiment with water and pennies.  We started our class as we start all our classes, with an afternoon circle to share any highlights of the last week and to go over the plans for the day.  Before we got to our circle spot the kids found a really strange brown fungus on a rock on the trail.  We know it’s fungus because after poking it, it released spores into the air.  The fungus looked like hair and they noticed that after poking it a few times it got smaller and smaller as if it was disappearing, strange!

At our circle spot we reviewed what we learned last week and I mentioned some of the ideas of the day.  I brought up the idea of capillary action.  It’s a big concept but it plays a really important part in nature and most of us have experienced it somehow!  I asked them if they have ever walked in wet grass and even though the grass may have been short their pants got wet almost up to their knee caps?  A lot of them nodded and agreed that has happened.  Then the kids started to chime in and offered other ideas, such as when you spill on a tablecloth and the water spreads out really fast and far, great example!  I told everyone we are going to do a really cool and simple experiment with pennies that will help us see how this process works.  Well, what is capillary action anyway and what does it have to do with water tension?  Another big concept.  Here is a great link to USGS about capillary action: https://water.usgs.gov/edu/capillaryaction.html In order to understand capillary action we need to understand water tension.  Last week during Biomimicry we found animals that could walk on top of water, like the water striders and whirligig beetles.  We also know that things float on water, like wood and leaves, but what allows these animals to stand on water is a bit more complicated than a boat floating because it displaces water.  Water striders and whirligig beetles and a mat of floating fire ants uses water tension.  Skipping ahead in the day we did an experiment to test water tension.  Water essentially “sticks” together because it is bipolar.  Think of it like the + and – of a magnet.  Because water molecules really enjoy hanging out together and can be hard to pull apart, they can create things like water drops!  Or in our case, a dome on a penny.  Since water “stretches” so to speak, animals can use that to stand on top of it.  Capillary action also works because the water molecules stick together as they climb up a surface.  If you’ve ever put celery or flowers in colored dye and watched the color climb up, that is exactly what is happening with capillary action!  Next week (week 4) we are going to do an experiment with colored dye to see this in action!

The rest of the day was spent hiking, exploring a pond full of frogs, froglets and tadpoles and listening to the sounds of Irvine.  We also have the results of our penny drop experiment which I’ll share later in the post.  On our hike to the newly constructed shaded ponds of Irvine’s forest, we found a sassafras tree on fire with fall colors.  The leaves were a stunning bright orange and red.  We briefly thought about the uses of this plant from using the roots for root beer back in the day, to boiling the leaves and twigs in water for tea and even using the sticks for a fire starter since the oil is rather combustible.  Another awesome feature about this plant is its three different shaped leaves, the mitten, the regular leaf and the dinosaur foot or ghost.

Once we got to the ponds we spent most of the rest of the day finding amphibians.  The tadpoles have almost all grown up, having gone through metamorphosis, but there were still a few left.  We found one baby frog that was barely larger than your pinky’s fingernail!  We also found a snail and looked closely at its tentacles and eye spots.  Most of the frogs we were finding were green frogs and the babies could have also been gray tree frogs, but it was hard to tell since they were merely tadpoles.  We explored the pond, dipped our feet in carefully, journaled on the rocks and even found a frog that nature had claimed and his body was all shriveled up.  The kids decided an appropriate burial in the dirt was necessary. Before we left the ponds we all took 3 minutes to find our own spot near the ponds to do a quiet listening moment.  I asked everyone to think of all the sounds they heard and also to share with me after what their favorite sound was that they heard.  I was so impressed that everyone really took the assignment to heart and enjoyed it and picked their favorite sound.  Here are the things we heard: trucks, leaves rustling, crickets, knocking on wood (woodpecker?), birds singing, water trickling, airplane, a frog in the distance.  Here are everyone’s favorite sounds: Elias liked the trucks, Noa liked the winds in the trees, Mr. Dennis heard a frog burp, Solace liked the birds and everyone else, included myself, liked the sound of the water trickling over the rocks. The last task of the day was to do our penny water drop experiment to see how water tension works.  We stopped at the Ed Hut for the experiment.  I pulled out three dry pennies and three eye droppers and a jar of water.  The experiment is to see how many water drops you can fit onto one penny.  After a lot of trial and error and noticing a variance in the results, we decided that there was likely one penny that was superior to the rest (held the most water drops) and that tails was better than heads.  It also mattered how carefully you placed the drops of water on the pennies.  Here are our individual results with a few trials:

Awesome results and you could really see how the water wanted to hold together until it reached its max capacity and spilled off the penny.  Next week we’ll finish our capillary action experiment and do some exploring in the meadows and learn a bit more about bees and their fascinating honeycombs and communication. 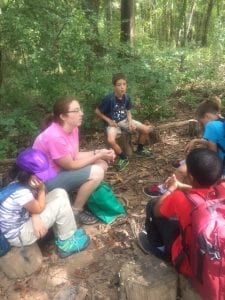 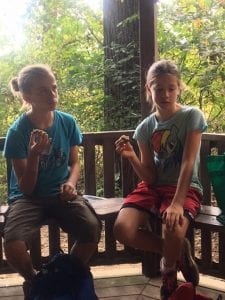 Snack in the gazebo 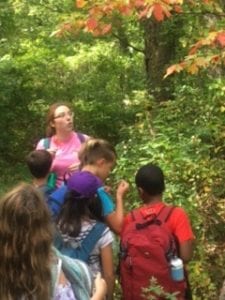 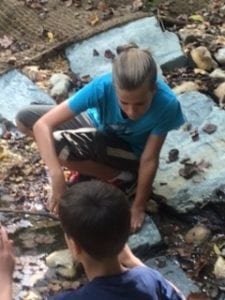 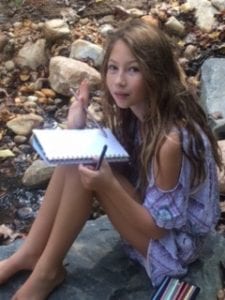 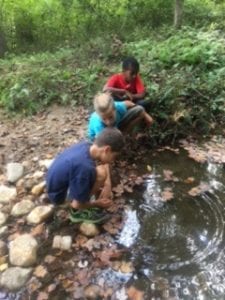 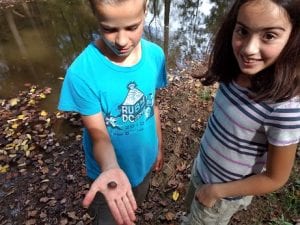 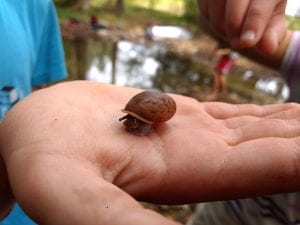 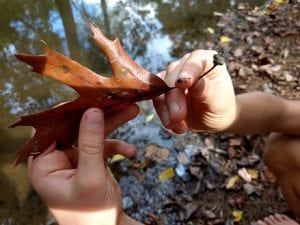 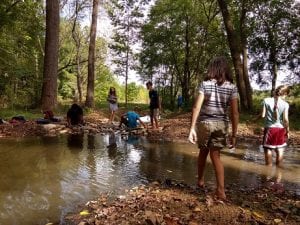 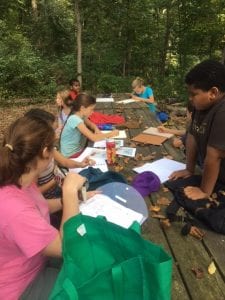 Journaling at the end of class 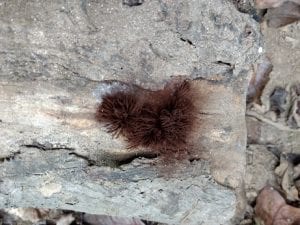 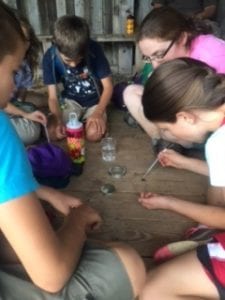 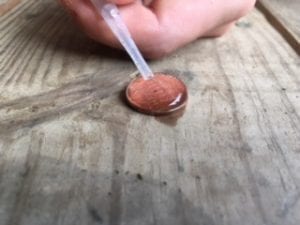 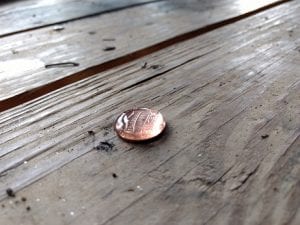