Today was all about exploring some of the meadows of Irvine that we haven’t had a chance to hike through.  We started at the Gazebo with snack and a quick lesson on reading maps.  Looking at the Irvine map we identified the legend and also the compass rose.  We talked about why it’s important to orient your map.  The best way to do this is with a compass so that your map is oriented north.  This way, when you’re hiking you know the correct direction to go.  We turned our map so that the N on the compass rose was facing North and then talked about the direct we were going to be hiking.

The destination?  The “Back Meadow” of Irvine.  We hiked down the “South Meadow” by the Gazebo, past the vernal wetlands and to another vernal wetland at the back of the “Central Meadow.”  Here we played a game of Predator/Prey.  Predator/Prey is essentially a game of tag but the person who is “it” is having to chase and find the people that are running from him/her.  The people running are mice while the predator is a hawk.  The mice can do whatever they need to do to escape the predator and that includes camouflaging and hiding, hoping the predator doesn’t see them as they run by and if the predator gets too close they can run and try to avoid being tagged.  (Below Eva is hiding from Elias the hawk in the white shirt barely visible in the bushes in the picture). After a few rounds of predator/prey we continued on to the “Back Meadow,” a place we haven’t been to yet all semester.  We felt like the only people in the meadow and forest!  After we had just entered the trail we found a really cool bird’s nest made out of mud and grass.  We thought about what kind of bird made the nest, maybe a robin or mockingbird?  It was everyone’s idea to put their hands around it when we took a picture so we could remember the size, what a great idea!  As we continued on we identified a thistle in seed, it looked like a huge dandelion puff.  This meadow was a perfect place for some journaling, so we found the wood dock and pulled out our journals.  The task was to pick one thing in nature to answer three questions about: “I notice…” “I wonder…” and “It reminds me of…”  We also had the choice to write a haiku if we wanted.  There are different types of haikus but generally they are poems that follow a simple syllable rule, 5, 7, 5.  Check out some examples of haikus below in the gallery.  Some of the items that people choice to journal about were: James chose the thistles, Solace chose a hedgehog, Eva chose milkweed, Elias chose a leaf he found near the dog, Henry chose a tree with red berries and Lev chose the trees with no leaves.  Lev wrote that those trees reminded him of skeletons.  Elias also found a milkweed pod with seeds in it, he pulled the seeds out and showed me and said that the seeds looked like a pineapple and they really did!  They had a yellow color too them and the pattern looked like a pineapple. After spending some quiet moments journaling on the dock and reflecting on the nature around us, we continued the loop around the “Back Meadow” and wound up near the ponds.  Before we got to the ponds I pulled out the map and asked everyone what direction they wanted to go (after we oriented our map) and the ponds was the destination of choice.  We spent a few minutes at the pond exploring and noticing the changes the pond was going through in Fall.  There was less algae in the pond, all the plants have gone dormant and the water seemed really clear.  We continued to the middle meadow and set our stuff down on the dock over one of the small vernal pools.  Everyone wanted to play a game of choice, which was predator/prey, while some of us wanted to relax a bit more and listen to a story.  I read a book for those that didn’t want to play the game called “Miss Fiona’s Stupendous Pumpkin Pies” for Thanksgiving last week.  When everyone was done with their round of predator/prey they ran back and said they saw mice in the meadow.  That’s probably why we saw the Northern Harrier flying low over the meadow as we left to head back to Irvine. 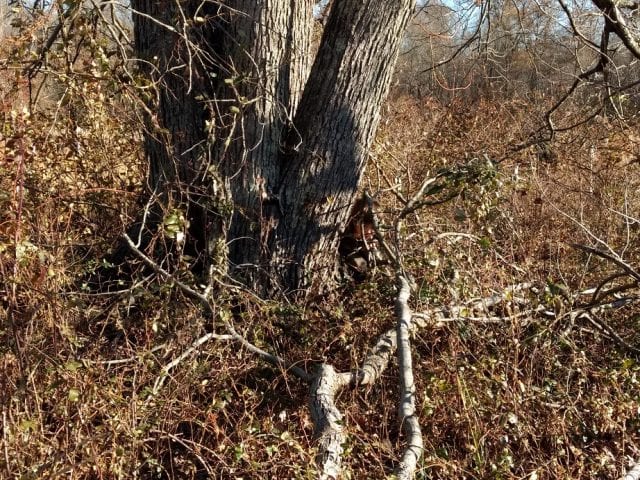 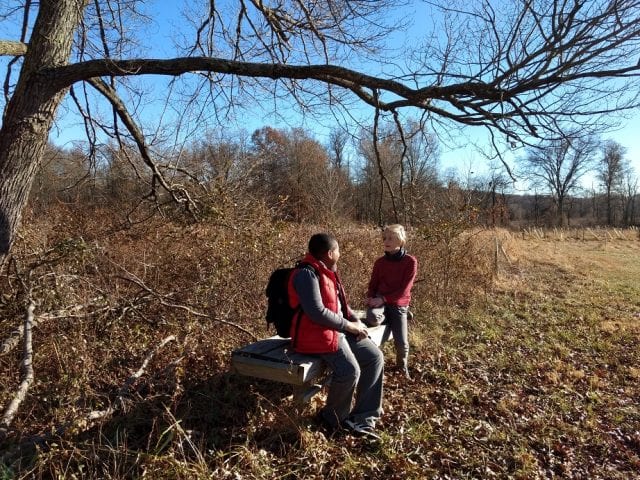 Solace and Henry taking a break 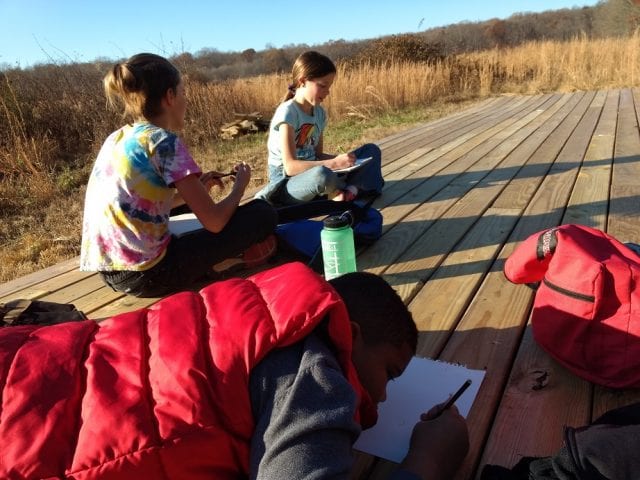 Journaling about our nature object 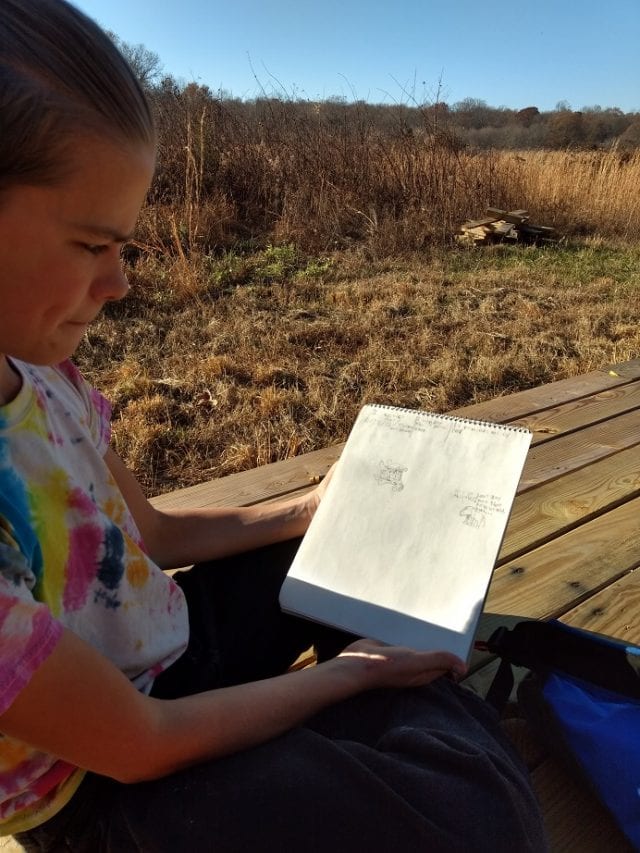 Jame’s journal about thistles and eeyore 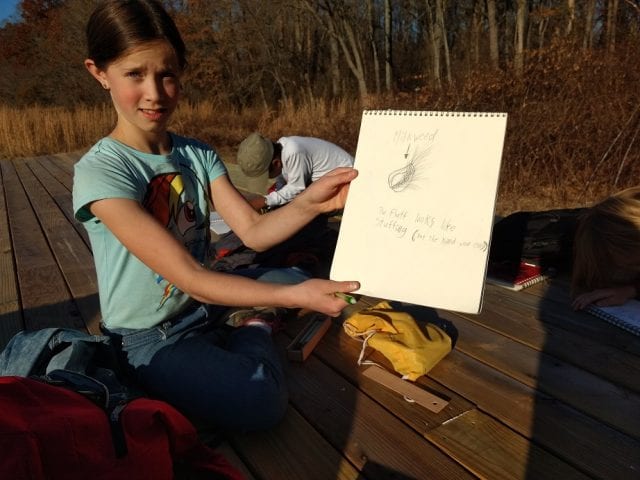 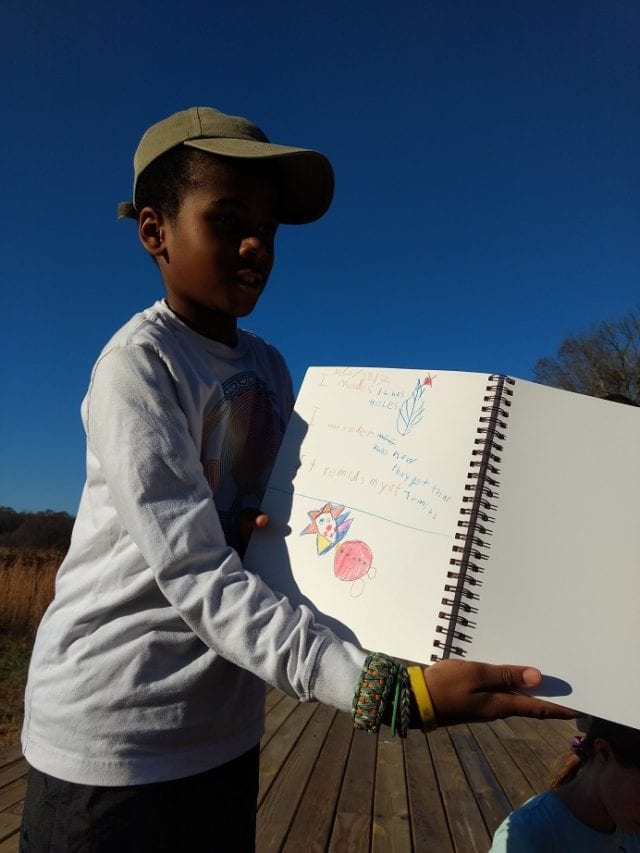 Elias journal about the leaf 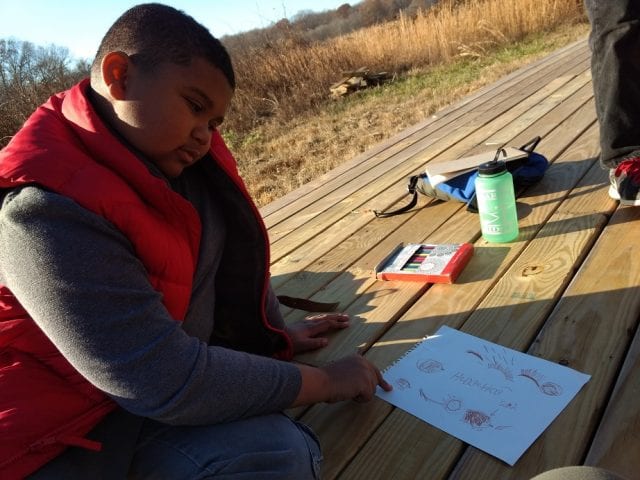 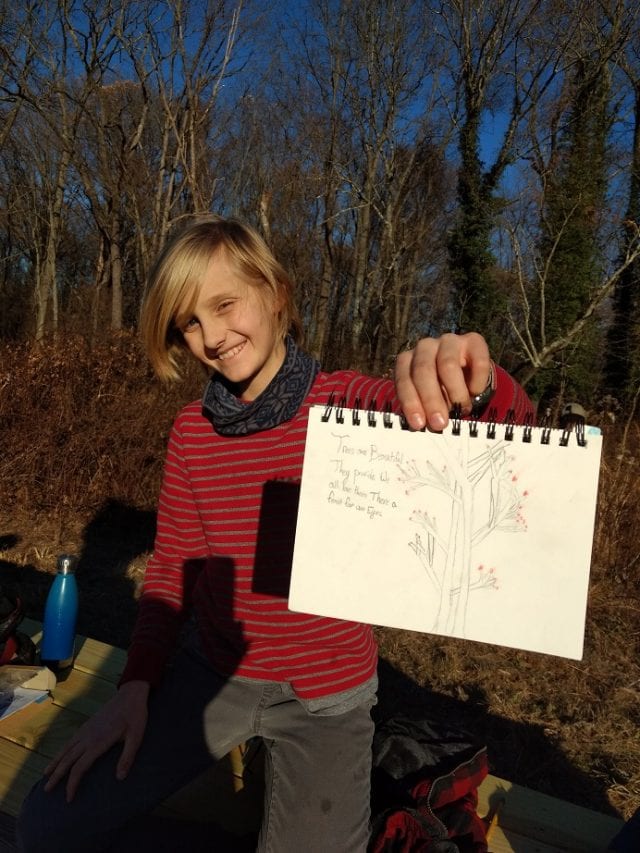 Henry’s journal about the tree with a Haiku 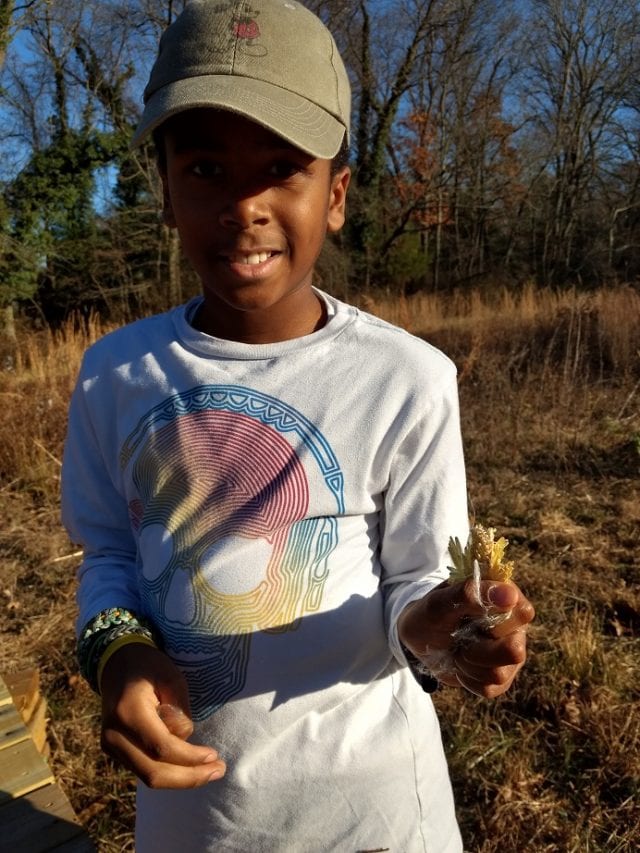 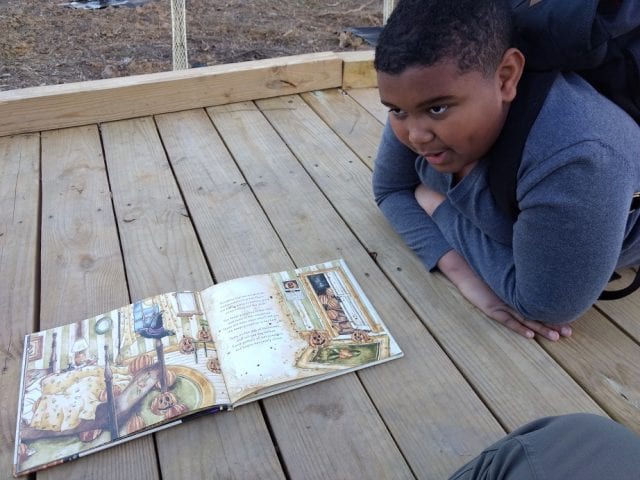 Solace listening to the story