Today we looked at plants, plants and more plants.  We explored plants in the meadow, in the forest and by the stream.  The theme for the day was comparing two different meadow plots to see if one had more species than the other, one plot was more disturbed by humans and the other was less disturbed.  We also got to see the new Native American wigwam that is being constructed.

Because it was a day about plants in the meadow we headed to a new spot that we haven’t explored yet.  On the way discovered new hickory nuts, ones that are a lot larger than the other hickory nuts in the forest.  We spent some time cracking the nuts open and tasting the yummy hickory meat on the inside.  Everyone really liked it!  Once we got to the meadow and found a good spot that looked disturbed (it was right next to a road and a new composting toilet) we all sat down in the shade with snack and talked about why we were going to be looking at plants in the meadow and what did those plants have to do with farming. Think about most commercial farms today.  They are rows and rows of the same crop for miles and miles, sometimes as far as the eye can see.  Usually these crops have a few weeds on the edge but most of them are void of any other life even wildlife.  These farmed habitats lack Biodiversity.  What is Biodiversity?  I asked some of the kids and we started a discussion.  Biodiversity is the number of species in a habitat.  A habitat with high biodiversity has a large number of species (either plant or animal or both) and a habitat with low biodiversity has fewer species.  What habitat do you think would flourish more?  We all agreed that a habitat with higher biodiversity is healthier, but how?  When a habitat has higher biodiversity it is more resilient to change.  That change could be a disease or insects that ravages a habitat and kill a certain type of tree (beetles and pine for example) or it could be fire that burns most of the plant life to the ground (some trees like firs are more resilient to fire and some plants require fire to germinate) or it could be drought (a lot of native plants are more drought tolerant).  When you have a monoculture, which is growing one crop in an area, events such as fire or drought can be catastrophic because there is little to no resilience to those events.  However, if you grow multiple crops in one area these events won’t be as damaging because you’ll have a few plants that can survive while other won’t.

We thought about this when we started our first plot.  We spread tape in a square about 5 feet by 5 feet and counted the different plant species, identifying them when we could.  The goal was not to ID the plant but to count the total number of different species.  Here is what we found: 5 species of grasses (we looked at the seed heads and the grass leaf itself and determined they were likely different species), clover, dandelion, horsenettle (which is in the nightshade family and grows tiny tomato fruits that are toxic), sheep sorrel and plantain.  Lev said that the berries on horsenettle smell like dirty socks.  In total we found 10 different species of plants.  Looking at the plot we were examining however, one wouldn’t assume there were that many species and also you could look at the health of this plot from another perspective.  Yes, it has 10 species of plants, but are the types of plants found here providing much in the form of habitat or food for animals?  What is the value of these plants?  This is a question we are going to come back to next week.  After doing our plot we continued hiking where we looked at the longhouse and played in the huge sycamore tree (below). The longhouse is an amazing building being built by hand from local materials (you can see a picture below in the gallery).  These longhouses were used by native Lenape and were gathering places for families and places where families lived together.  We will come back to see how it has progressed.  We also found in the forest nearby some amazing vines to climb and swing on (after testing their safety) and explored the surrounding forest before continuing along the trail to the large sycamore.  We spent some time up in the tree which has grown into a natural tree house.  The kids found natural hooks on the tree where they hung their backpacks and were also thinking of ways to build natural walls and ramps.  While everyone was exploring we found a spring peeper frog on a tree right next to the large sycamore (see the picture below).  Spring peepers are tiny and they have a characteristic “X” pattern on their back.  There is a small creek nearby and this frog being in the forest shows how frogs as adults leave their natal streams or ponds and live in the forest. Next stop, the stream, where we left our stuff on the bridge while exploring the nearly untouched stream below.  The rocks have barely seen the bottom of a shoe and are covered in moss.  The stream rocks themselves look as if they have been in that same spot for hundreds of years.  The stream banks were lined with native plants like ferns and spicebush so it was a great habitat to tread lightly and explore.  Right away Elias found a crayfish!  Eva picked it up gently and we placed it with some water in a container to get a closer look before returning it back to the safety of the stream.   I found a green frog too!

While some of us explored the stream I introduced a really fun counting/guessing game that we still don’t have an official name for.  Some of us picked the name “Acorn Caps” while others said “Acorn Guess” we still aren’t sure.  Essentially each person has 5 items (small and non pointy is best) in their hand.  Behind their back they place a certain number of acorns in their other hand for the other person to guess.  Let’s say you put 3 in your hand that you reveal, closed, for the other person to guess.  They guess 2.  That means they owe you 1 acorn.  Whatever the difference is, the person who guessed has to give over that many items (acorns in this case).  If the guesser guesses the exact number THEY get all your items!  If you have zero in your hand and they guess zero they get all your acorns and win.  There’s some strategy to the game and it’s a lot of fun and even teaches some math!  It definitely was popular. Before heading back to Irvine for the day we did our second meadow plot.  This plot looked far more diverse and it looked like a healthier habitat (see it below in the gallery).  We were hoping in choosing this spot we would get more than 10 plants in the plot.  Here is what we found: milkweed, clover, foxtail (grass), a tall grass (unknown), plantain, curly grass (unknown), grass with a lot of seeds (unknown), unidentified plant (small shrub of some kind), horsenettle, onion grass.  In total 10 plants!  BUT here is the important part.  Look at the difference between the two plots.  Look at plant height and value.  Milkweed alone has extremely high value because it is the host plant for the vanishing Monarch Butterfly.

So how is farming connected to meadows and how have people learned from how nature grows meadows to enhance their farms?  Nature has proven that a more diverse habitat, like a naturally growing meadow, has a higher resilience to disturbance than a monoculture of grass (sod) or rows and rows of corn.  People are starting to change how they farm, if even on a small scale (and even taking this idea to larger scale farming) so that more plants are being grown in the same spot to protect from disease and insects, to add shade for other plants, to keep the soil moist with water and to naturally add nutrients to the soil.  There is a lot we can learn from how nature does things, even if it is something as simple as growing plants in a meadow. 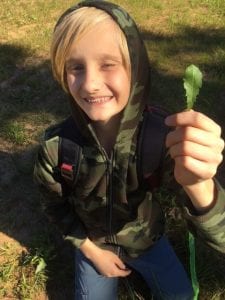 Henry with a dandelion at plot #1 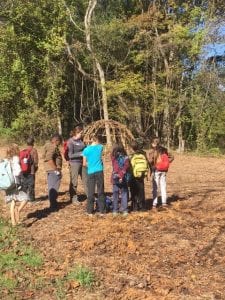 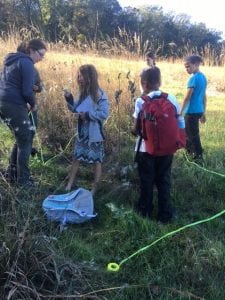 Plot #2 with the milkweed 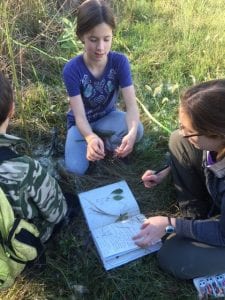 Trying to ID plants at plot #2 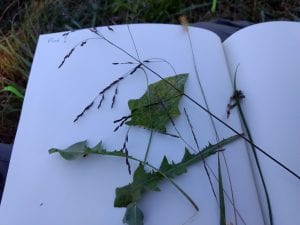 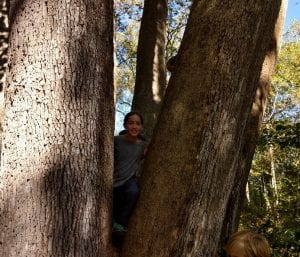 Climbing in the sycamore tree 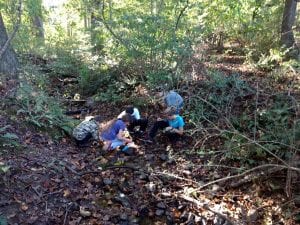