Happy Halloween!  Today was our mid-semester campfire which we got to celebrate with the other homeschool classes and our families and friends.  Some of us even came in costumes!  Before heading down to the campfire we passed out the silicone molds.  Last week we were learning about spider silk and how people use learning from the refractive properties of spider silk to help save birds from hitting glass windows.  We tried different things in our molds from acorns to rocks to leaves, ferns and flowers.  Our molds were in the shape of oak leaves and acorns.  Afterward we made our way down to the barn.  On the way we collected a lot of sticks for our fire and found a red-backed salamander, silver variety, at our log circle spot.  Even though they look small the one in the picture (below in the gallery) is a full grown adult getting ready to wait out the long, cold winter under a log in the warmer soil. Down at the barn we talked about fire safety and discussed the role of the fire tender (the person who watches the fire and adds wood to the fire).  The fire tender is also the person that helps make sure everyone remains safe around the fire and is the one asked permission of when you want to add anything to the fire, including food to cook.  We also discussed the three things you need in order to make a fire.  The first thing you need is fuel.  The fuel is usually wood and it should be dry.  We also talked about how you can’t just light a huge log on fire you need to start small.  First you need a fire starter, which is something that lights very easy, such as dry newspaper or cotton balls.  In nature you can also use things like dry grass, milkweed fluff, dry leaves, shredded bark or husk.  On top of your fire starter you want to place very small sticks (tinder).  Smaller sticks light easier so you’ll need a lot of them.  Sassafras is great tinder because the oils in the bark are naturally flammable.  On top of the fire starter and smaller sticks you’ll want to place larger sticks (but not too many).  There are a few different ways to lay your logs for your fire.  You can build a pyramid, a teepee, one that provides a wind block or a triangle.  What else does a fire need?  It needs oxygen.  Often times fires get smothered so allowing for ample airflow is very important.  Lastly you need a spark, the hardest part.  You can get a spark easily by using a lighter, a match or a flint and steel but what about back when those things didn’t exist?  How did people start fires?  Flint knapping is something you can do to get a spark by striking certain types of rocks together.  Another way is using a bow drill, which we got to practice down by the fire.  Everyone who wanted to give it a try did and all agreed how hard it was to start a fire that way.  The closest we got was James and Noa working together to create smoke and ash!  They weren’t that far from coals that would light a fire. The rest of the afternoon we enjoyed building a fire, adding fuel, cooking food such as apples with butter, cinnamon and sugar, potatoes with olive oil and seasonings and of course s’mores.  We also tested our milkweed fluff in the fire to see how well it burned and it burned really well and very quickly.  Here’s to a fantastic rest of the semester!

It was a very rainy, cold day today as we learned more about echolocation and finished a project we didn’t get to work on during our lesson on spider silk inspiring technology.  Spider silk is one of the strongest materials built by a living thing in nature.  By comparison, if you were to have a steel cable made the same thickness of spider silk, the spider silk would be 5 times stronger!  Humans have yet to develop a material that matches the same strength as spider silk.  We started the day inside as we watched the rain pour down outside.  After dividing into teams of two we discussed the activity.  Because the bridges we were building were going to be small since our materials were 50 toothpicks, 8 small skewers, 6 small popsicle sticks and 4 five inch long strips of masking tape, we needed to work in smaller groups.  Working in groups is also a great skill to develop, it helps with problem solving, communication and compromise.  It also allows kids to express ideas and thoughts and alter projects with a teammate.  Once our bridges were constructed we planned to place rocks on top to see how much weight they could hold.  None of us anticipated the strength of the bridges!  In fact, Elias and Solace built a bridge so strong it held the weight of a kid standing on it elevated on blocks (James and Eva’s bridge also held the weight of a kid!).  They made sure their foot was not touching the wood blocks either.  It didn’t start to crack until the 4th kid had taken a turn testing the strength of the bridge (the bridge is pictured below with the rock stack).  We also looked around and noticed the different designs people had come up with.  Some bridges were built with design in mind and not so much strength, others were built with pure strength in mind and didn’t offer as much in visual design.  Some were very engineered and used weaving.  Engineering, even in small forms, is a great pathway towards creativity and discovery. After some bridge building, we bundled up and headed outside.  We hiked through the forest, listening and watching the rain fall through the trees, many of which are missing their leaves and providing little natural shelter.  We stopped at the gazebo for a break from the rain and to play a game to help us with communication since we were starting to learn more about echolocation.  What is echolocation exactly?  Echolocation is used by a variety of animals such as bats, dolphins and even cave dwelling swifts (birds) to find their food and to move throughout their environment.  Echolocation is a series of sound waves sent out into an environment and when those sound waves bounce back off an object the animal that sent out the sound waves can tell relatively what the object is and how far away it is.  Humans have learned from animals and developed our own form of echolocation called sonar (in water) and radar (in air) to help with exploring the depths of the ocean and navigation both above and below water.  The game we played in the gazebo is called Telephone.  There are two ways to play (thanks James for sharing a new way, it was awesome!).  One person thinks of a phrase or action and whispers it to the person next to them.  That person whispers it to the person next to them and so on as you travel around the circle (you can only whisper it once!).  Once it gets to the last person before the person who thought of the phrase or action they either say the phrase out loud or act out the action.  Usually what happens is some words get messed up along the way or the phrase changes entirely!  We also played the game (to give everyone a turn) down at the Ed Hut, which was much harder with the rain pounding on the metal roof.

Back at Irvine we got to meet an animal ambassador as we warmed up inside.  The animal we got to meet was a male corn snake.  Snakes are very beneficial animals and unfortunately suffer from bad reputations.  All of the snakes that live at Irvine are nonvenomous.  In Maryland we only have two venomous snakes, the Copperhead and the Timber Rattlesnake.  Neither you really have to worry about because the Copperhead is relatively non aggressive and only found in specific habitats in Maryland and the Timber Rattlesnake is found exclusively in Western Maryland and is seeing a decrease in their numbers, sadly.  Snakes have many helpful characteristics.  First they love to eat mice and rats, both of which are carriers of diseases and other parasites like ticks.  Snakes also provide a balance to the ecosystems they live in, keeping prey animals in check and even feeding other predators like hawks.  Snakes have some pretty cool features, too.  They have a rather unique way of smelling their environment.  They use their tongue to pick up scent molecules which they then put into an organ in their mouth called the Jacobson’s organ, which resembles a nose.  Snakes also have the ability to dislocate their jaw in two places, the jaw itself (attached to the skull) and the lower jaw can open in the center into two pieces to swallow large prey.  We talked about the cool features of a snake and got a chance to touch the snake too!  I’m sure that our snake was very happy to be in a comfortable home on such a cold, wet day (snakes are cold blooded after all!) 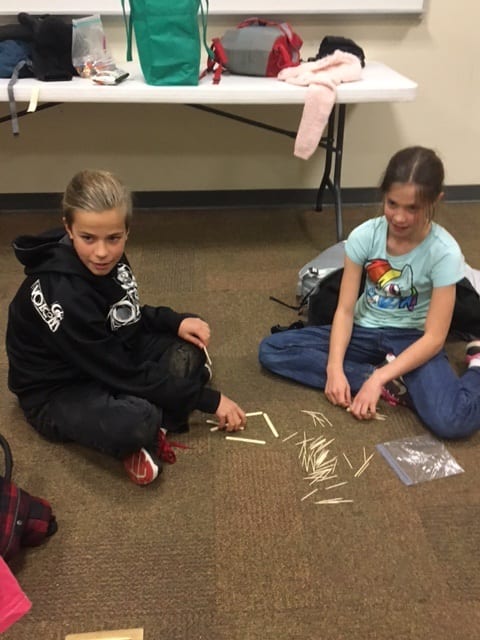 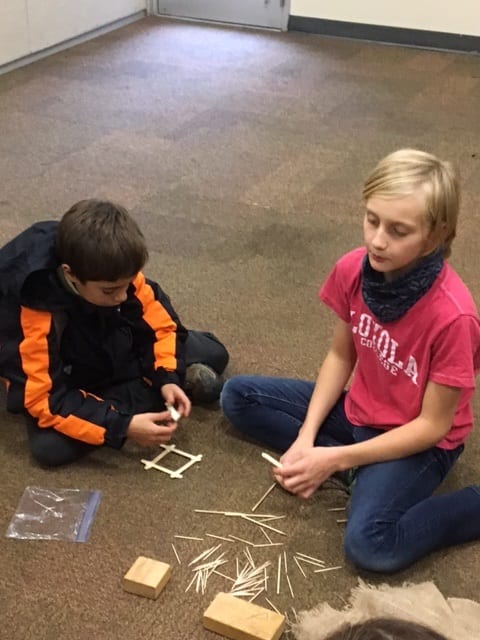 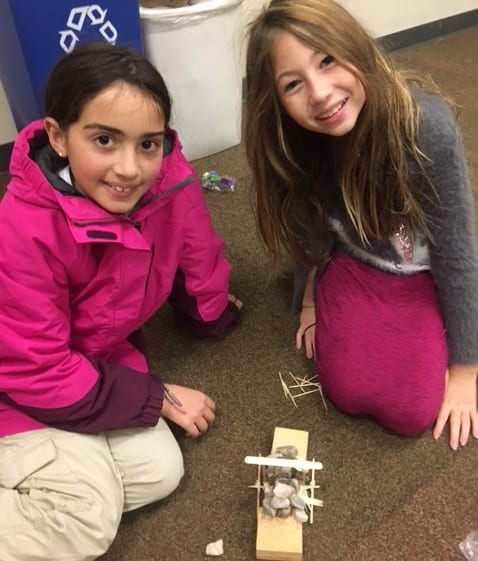 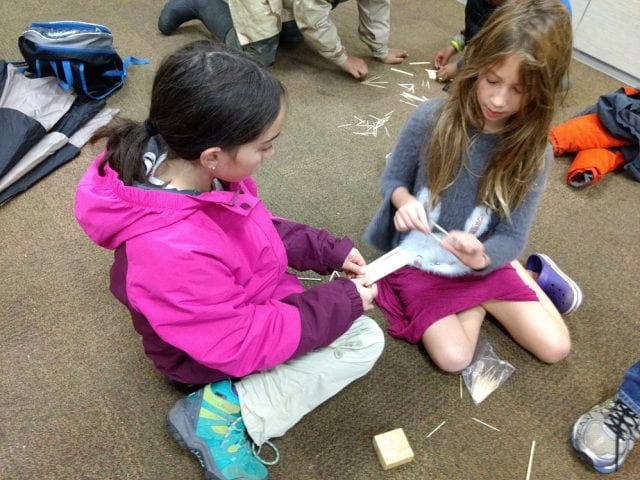 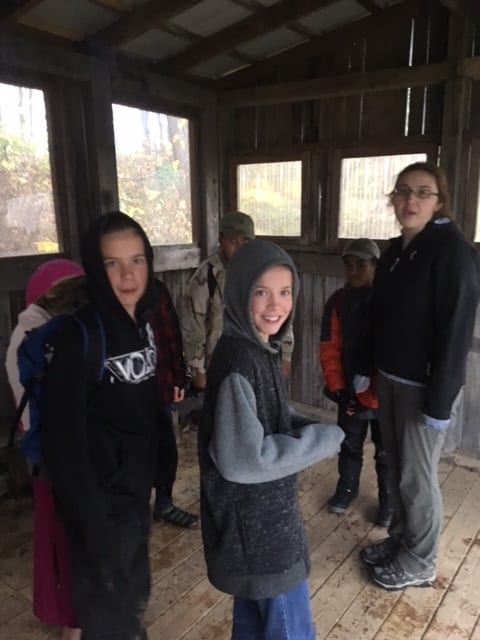 Playing Telephone in the Ed Hut 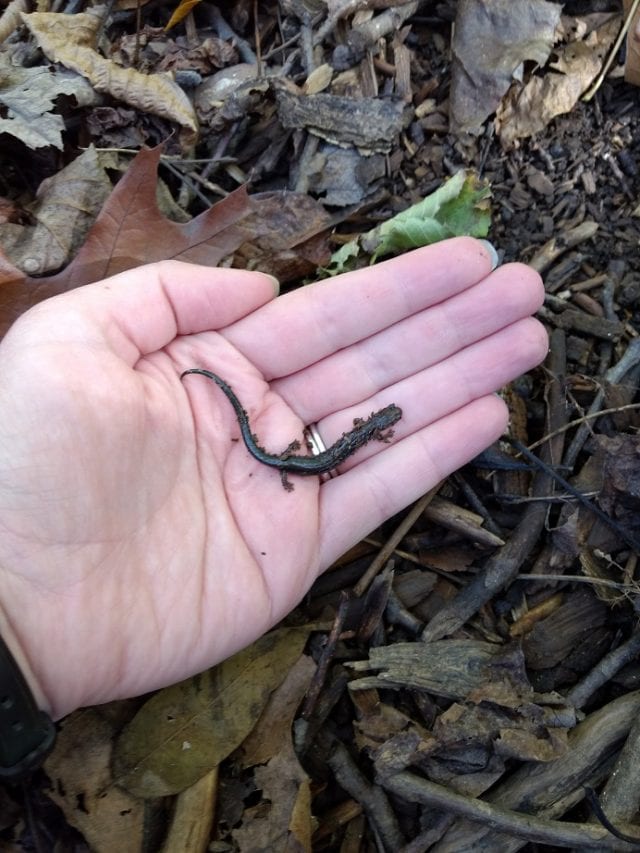 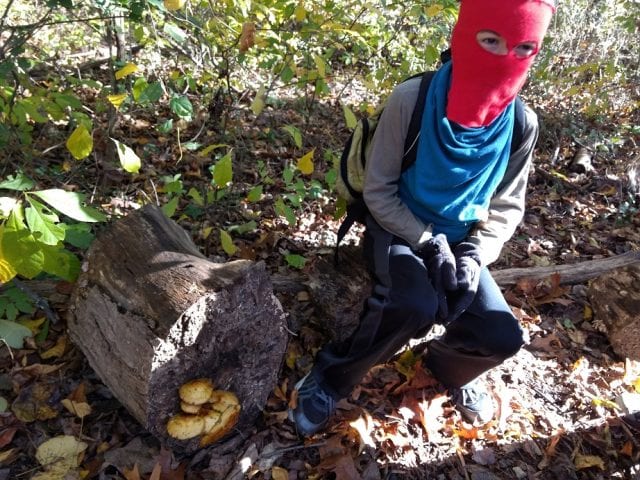 Lev in his costume 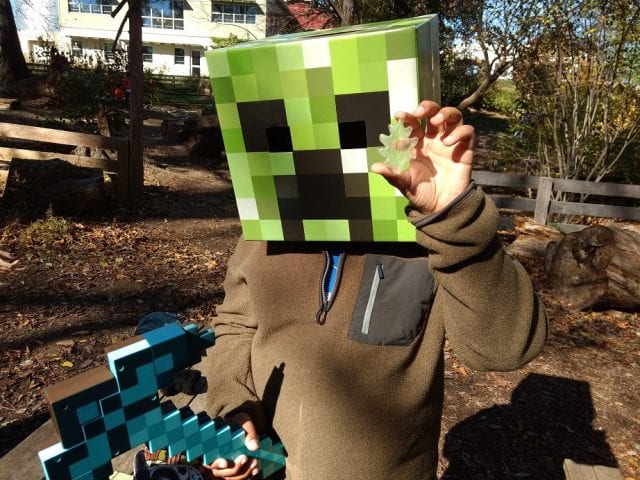 Solace in his costume with his silicone mold 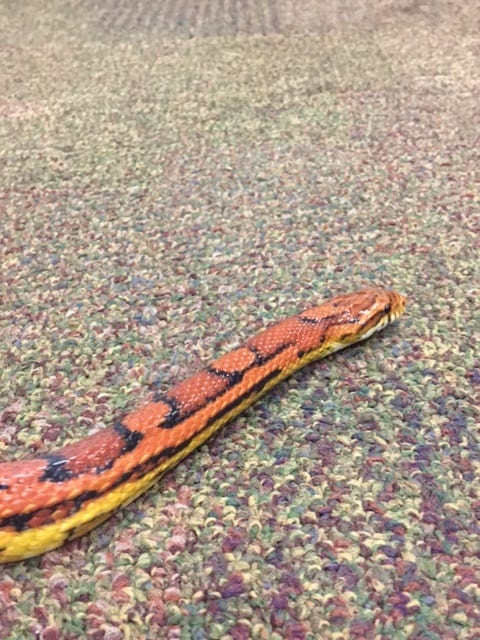 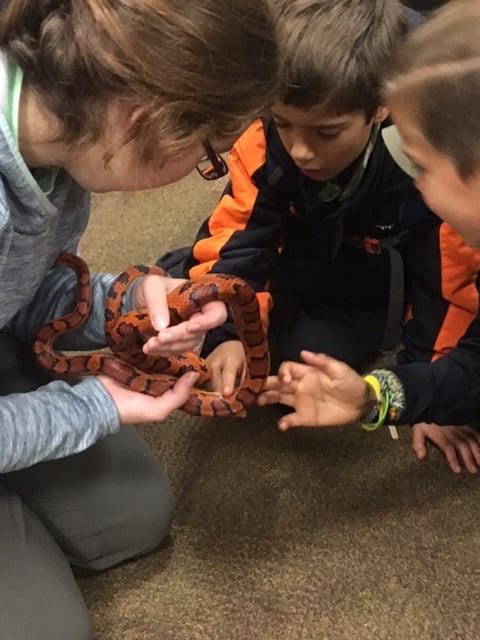