‘Slow and Steady’ Helped the Tortoise Beat the Hare, but Can It Hang On to Beat Us?

Had a fabulous hike at Soldiers Delight on Sunday morning–cool, crisp, sunny day and the birdlife was as glamorous as one could hope for, outside of a cruise to the tropics. 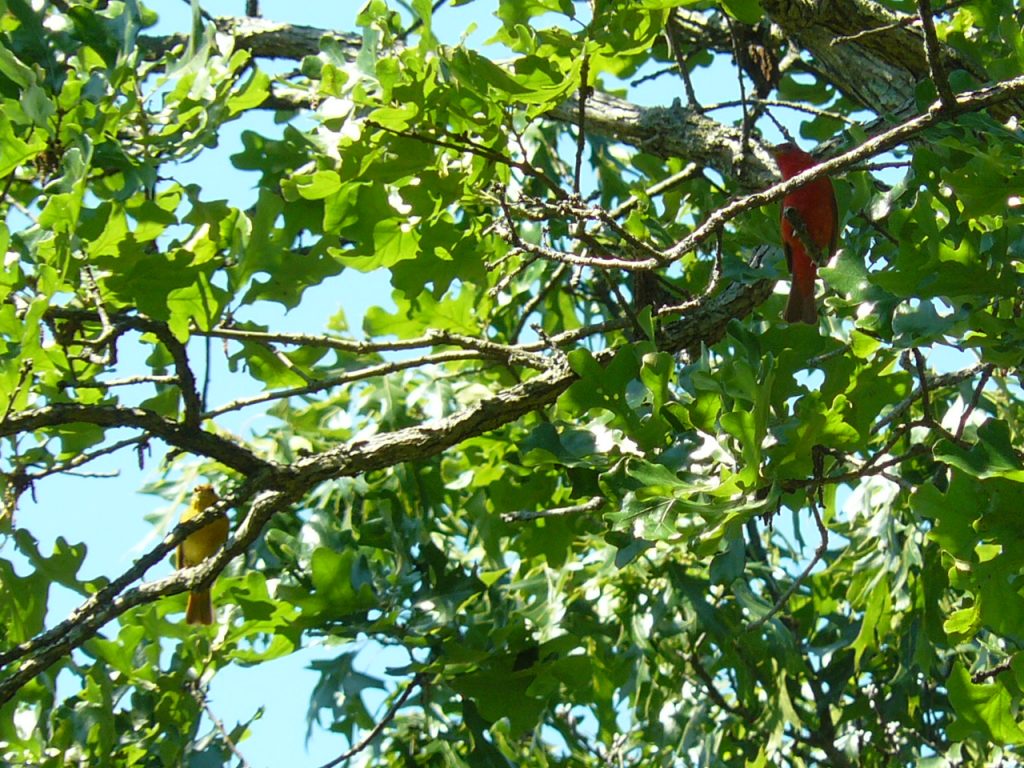 Talk about bright, bold plumage! Amidst the canopy of evergreens and the understory of dense greenbrier, we found a Red-Headed Woodpecker, a couple of Yellow-Breasted Chats, a male Blue Grosbeak, several Indigo Buntings, and both Scarlet and the far more unusual (in central MD anyway) Summer Tanagers–all among the Mid-Atlantic’s most colorful avian species. Soldiers, with its unusual mix of stunted oaks and pines, happens to be the only reliable place in Baltimore County to find Summer Tanagers, and this year there appear to be TWO pairs of this southern songster breeding there. The only thing missing from Sunday’s feathered rainbow was the brilliant orange of our beloved Orioles.  But it wasn’t their habitat; they need the much taller Tulip Poplars and Sycamores found throughout Irvine’s deciduous forest.  Irvine and Soldiers are truly two of the very best land-locked birding hotspots anywhere in the metro region.  Sure they’re lacking in the waterfowl and seabird departments; however, between them, these two neighboring sites along Baltimore’s northwest corridor provide suitable habitat for just about every species of songbird that can be found breeding, wintering, or just migrating through Central Maryland.  But, enough about birds . . . 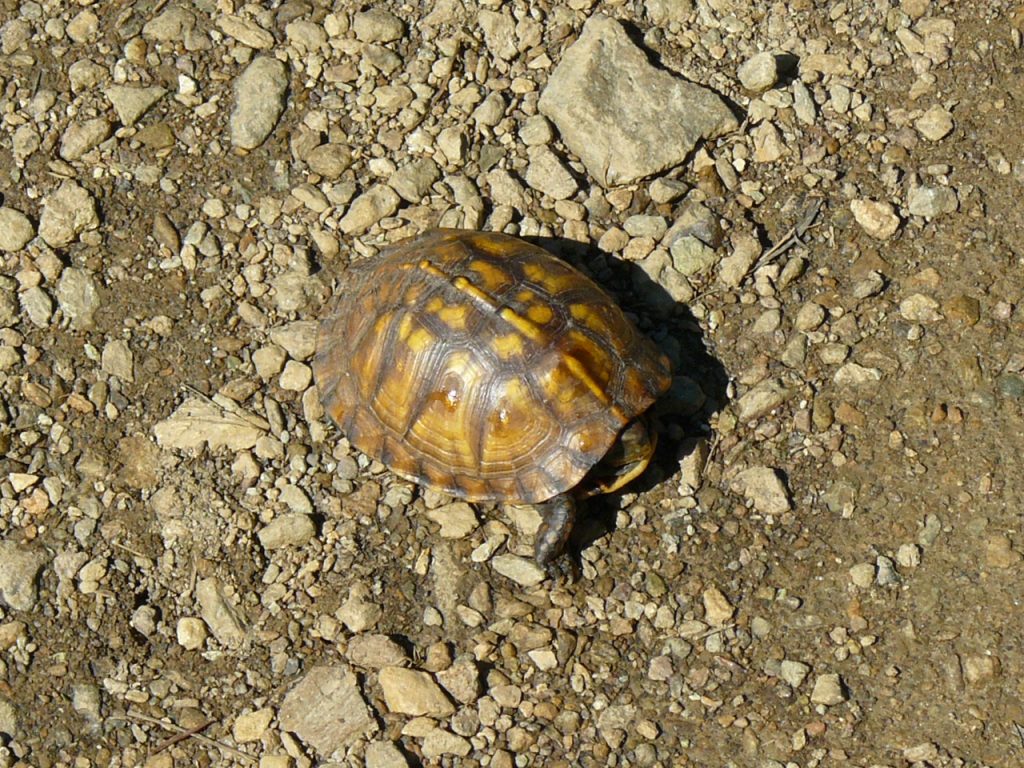 This is not to say that we struck out on any mix of red and yellow on Mother Nature’s palette that morning.  Midway through our three-mile hike, we had to stop for this little girl (identified both by her brownish, not red, eye color and her flat, not concave–an adaptation for mating, underside of her shell) in the middle of our path.  →

As all good travelers should, we picked her up, had a brief lesson on the natural history of Eastern Box Turtles, then set her back down–facing the same direction but just off the beaten path. I had two college-aged young men with me, my 21 year-old son and one of his good friends. Both are very good birders–with ears far more keen than my aging auditory receptors–and both spend quite a bit of time outdoors. Thus, I was fairly surprised by how taken they were with this young turtle and how rapidly they hurled curious questions my way. Clearly, they were interested and wanted to know more.  Growing up in rural south-central Pennsylvania in the 1970’s, Box Turtles were a common encounter when I was a kid.  Sure, they’re still a presence on both sides of the Mason-Dixon line today, but it’s easy to forget that children growing up today don’t run into them nearly as often.  Particularly in the northern parts of their range (Ohio, Pennsylvania, New York, southern New England), Box Turtle populations are in trouble, and it’s nobody’s fault but our own.  By some estimates today’s population may be only 60% of what it was just a few decades ago.  This is enough of a decline to give the species Vulnerable status with the International Union for the Conservation of Nature (IUCN).  Vulnerable species do not yet receive federal protection, but they make up the ‘watch list’ of organisms that are likely on their way to being declared Threatened or even Endangered.

To be clear, Box Turtles appear to have a lot in common with them, but Box Turtles are not tortoises. They do lead a terrestrial lifestyle, which is a trademark of true tortoises.  Box Turtles thrive in humid conditions and tend to prefer moist, low-lying forests or old fields, but they lay their eggs in shallow depressions in the ground and, other than occasionally cooling off in a mud puddle, rarely get into water. Box Turtles also have the high dome-shaped carapace (back part of the shell) as tortoises, rather than the flatter shape sported by most familiar turtles. However, terrestrial habits and carapace shape aside, Box Turtles came from the same evolutionary line as our more familiar basking turtles, which spend their entire lives in or near water.  One of the few places where that relationship is discernible is in foot structure.  Tortoises have ‘elephantine’ feet and walk on their toes; turtles have more splayed legs and walk ‘flat-footed’ on feet, which are often webbed, but not in the case of the Box Turtle.  Still, by most appearances and habits, Box Turtles are easily as close as we’ll find to a tortoise in the Mid-Atlantic and many people refer to them that way. 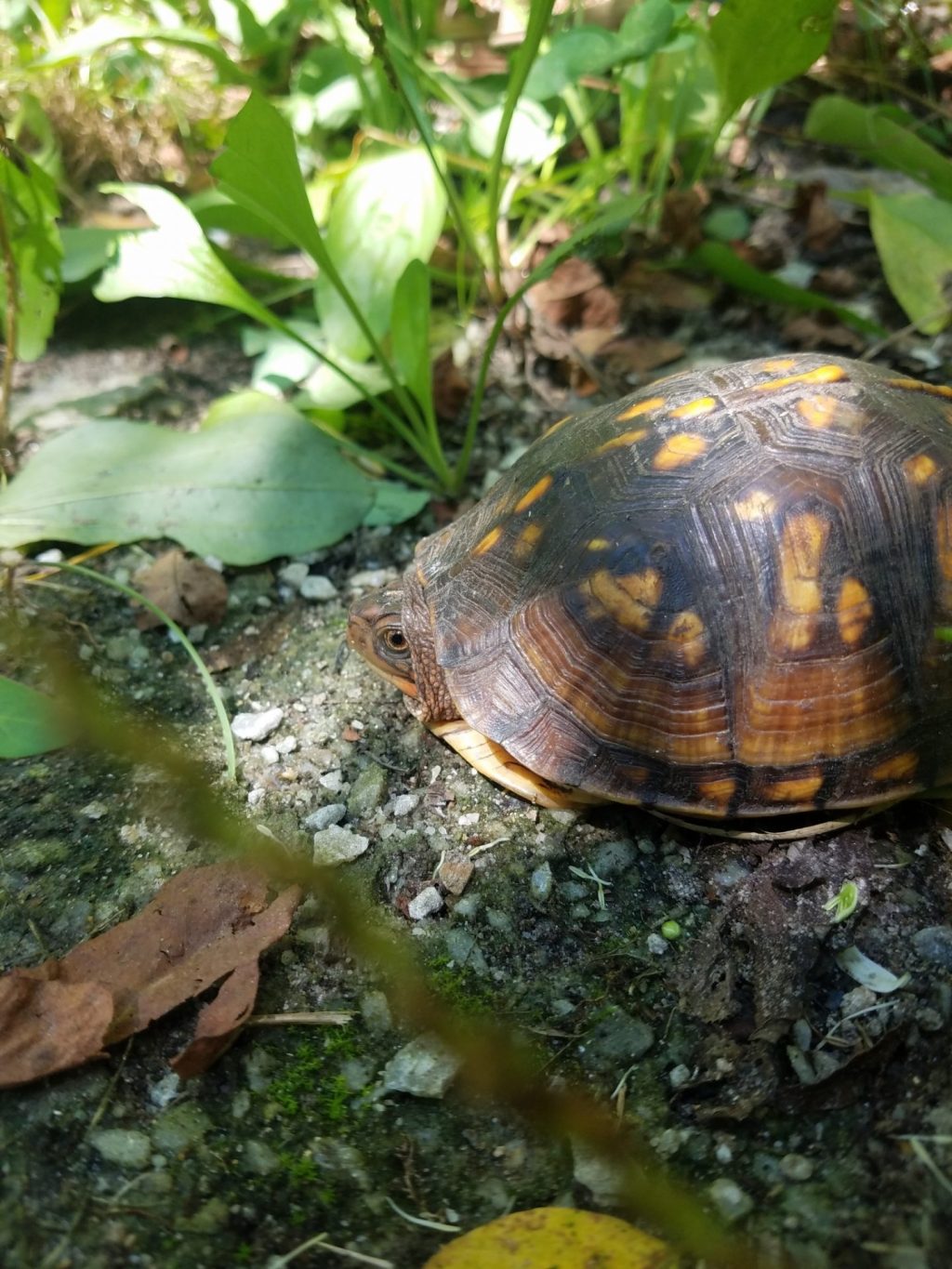 Slow, plodding movement is another trait which Box Turtles share with tortoises.  Under almost any circumstances, a wild animal that moved so deliberately would be laughingly easy prey for almost any interested predator and would likely go extinct in no time. However, in the process of evolution, the survivors are those who develop traits that counter every disadvantage with a compensatory advantage. In the case of the lethargic Box Turtle, which boldly lumbers around during the day time, 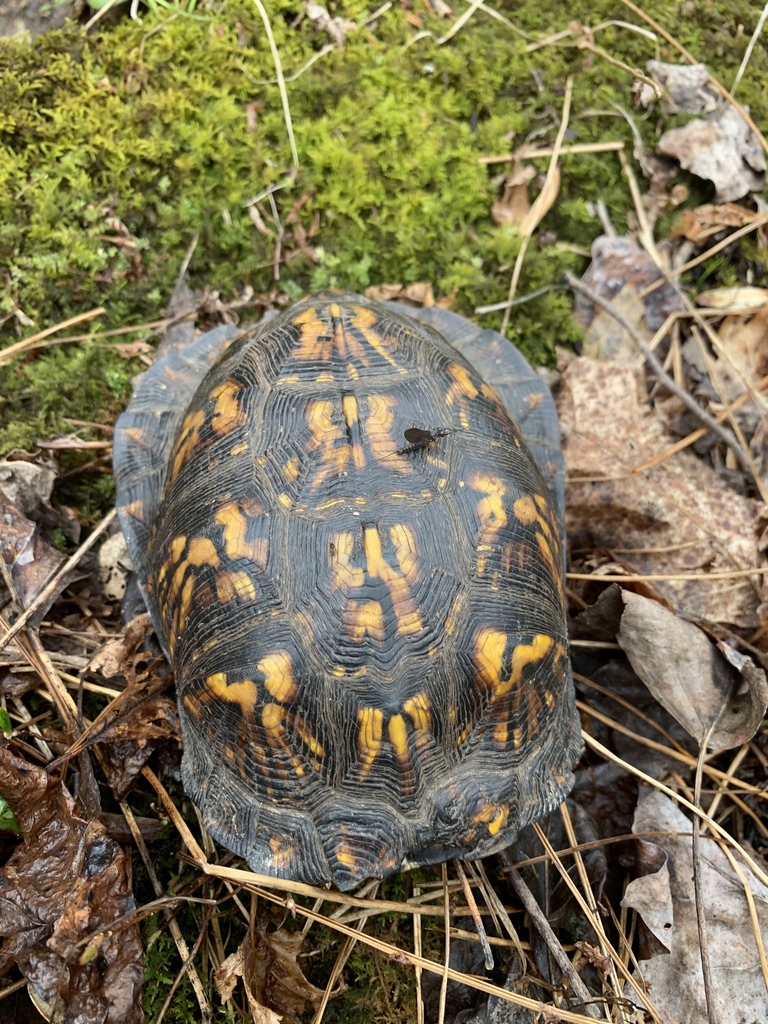 sporting bright orange markings that might as well be a billboard advertising free lunch for hungry carnivores, its superpower lies in most species’ area of weakness–the belly.  The bottom part of a Box Turtle’s shell (the plastron) is hinged and allows the reptile to completely close its shell, protecting all vulnerable parts (head, legs, and tail) within its armored house.  Sure, occasional Box Turtles fall victim to being caught off guard by a particularly sneaky fox or raccoon which gets to flesh before the reptile realizes what’s happening.  However, for the most part, the Box Turtle is not a frequent part of any predator’s diet; it’s just too well protected.  With little to fear, incredibly slow metabolism, and a flexible omnivorous diet (Box Turtles will happily eat slugs, worms, berries, leaves, mushrooms, and more), Box Turtles, like many reptiles, are longevity champions in the animal world.  Their average lifespan is 30-40 years, but it is not unusual for them to exceed 50 years and a few individuals have even outlived an entire century! 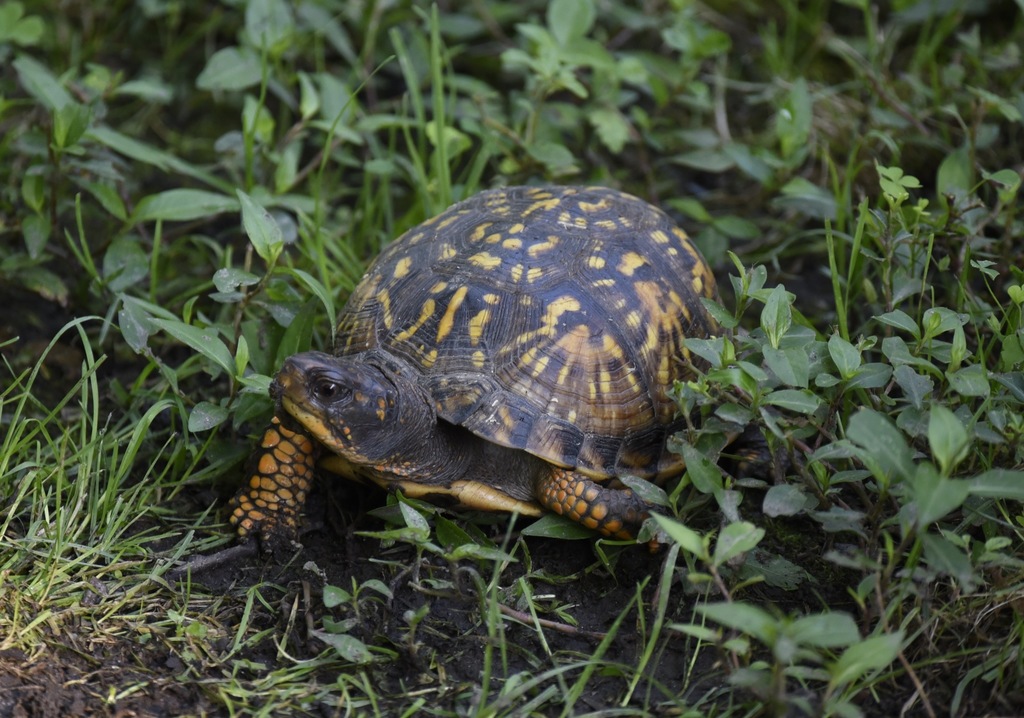 All of this begs the question:  if Box Turtles have very few predators, are ecologically adaptable, don’t need large bodies of water, and have long lifespans, why on earth is their population ‘vulnerable’?  For the answer, look no farther than the nearest mirror.  As a slow, land-dwelling, non-climbing critter, Box Turtles make a convenient, and hence frequent, research subject.  In recent years, biologists have determined that the three leading causes of Box Turtle mortality are all directly linked to human activity: 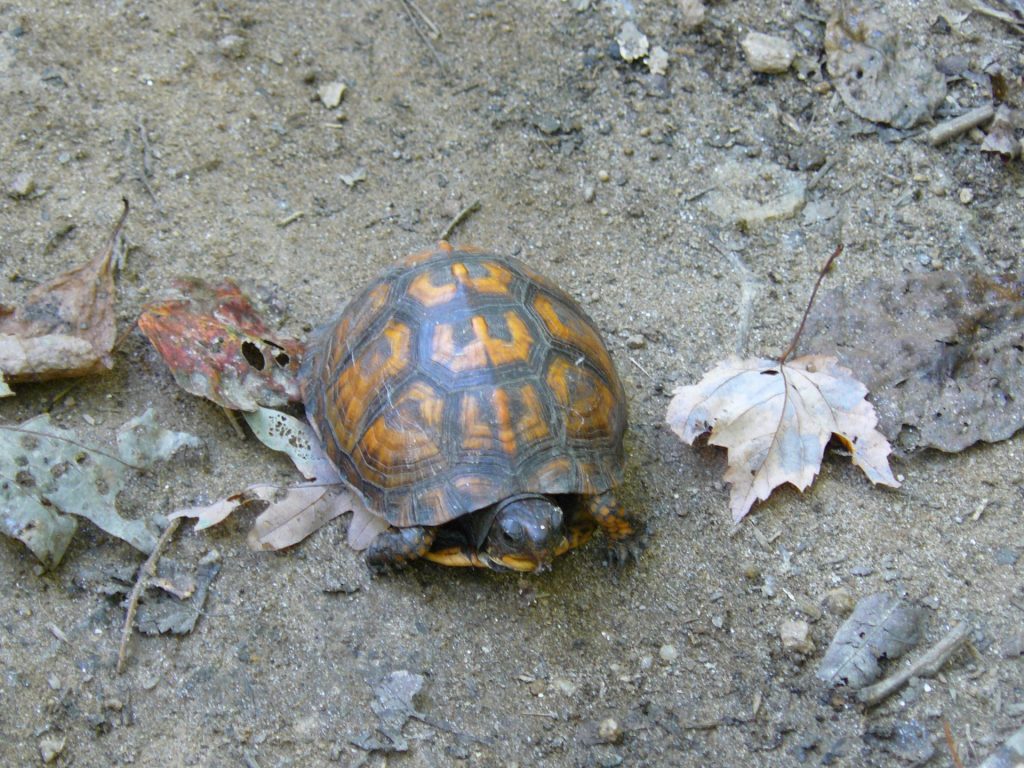 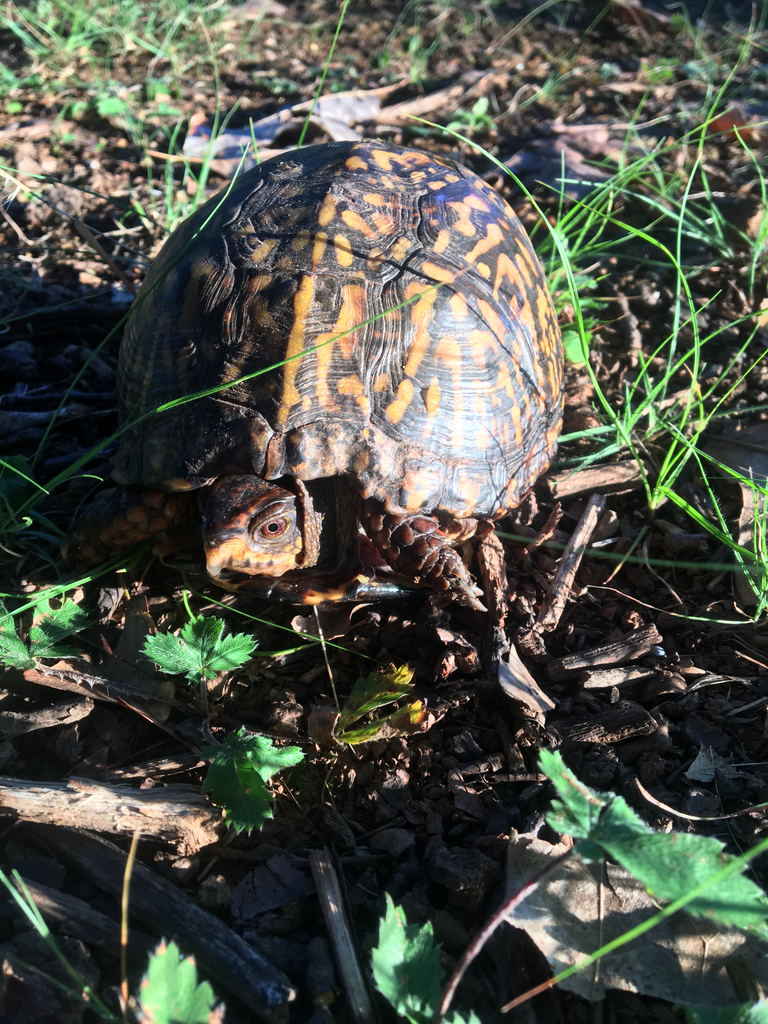 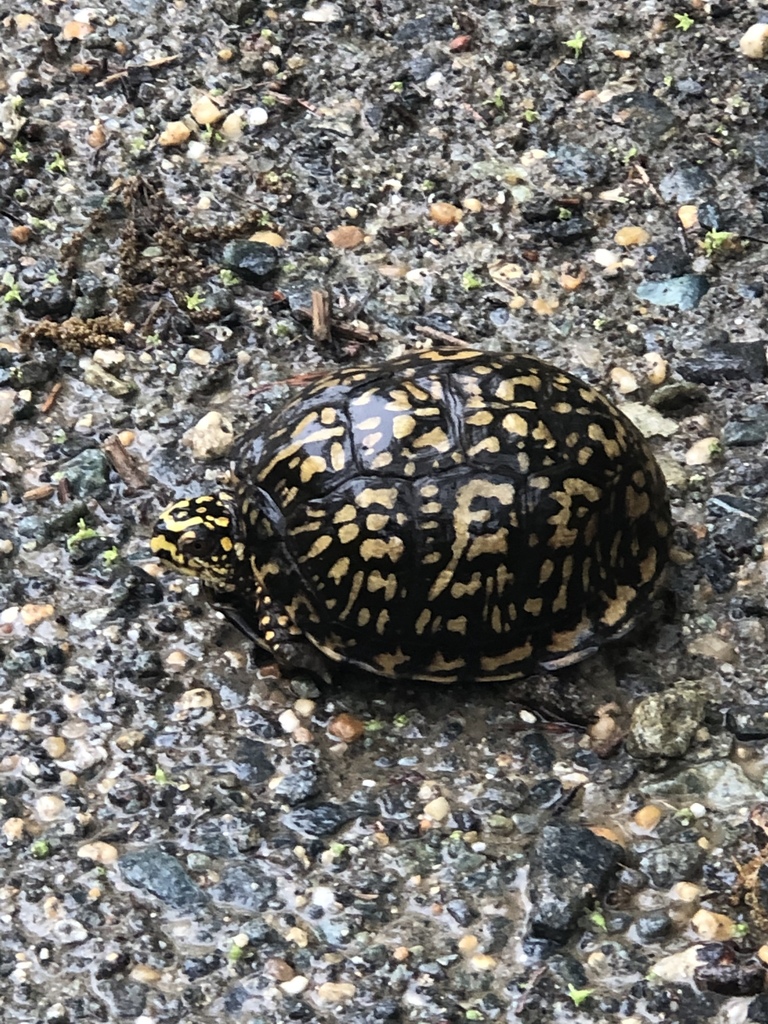 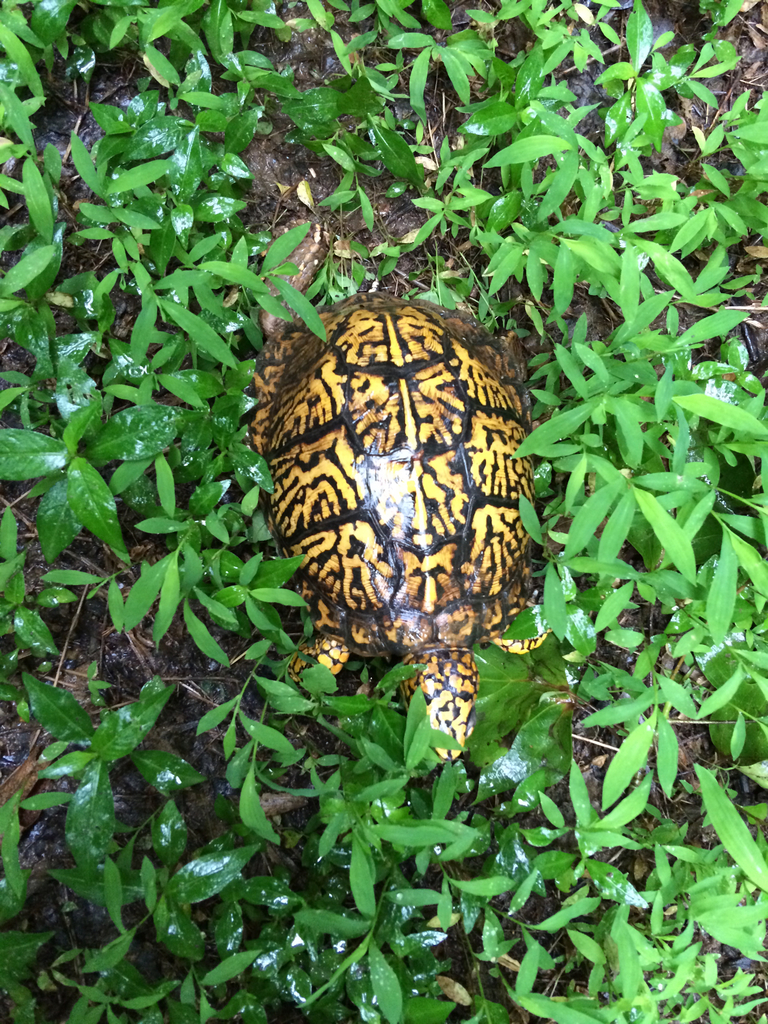 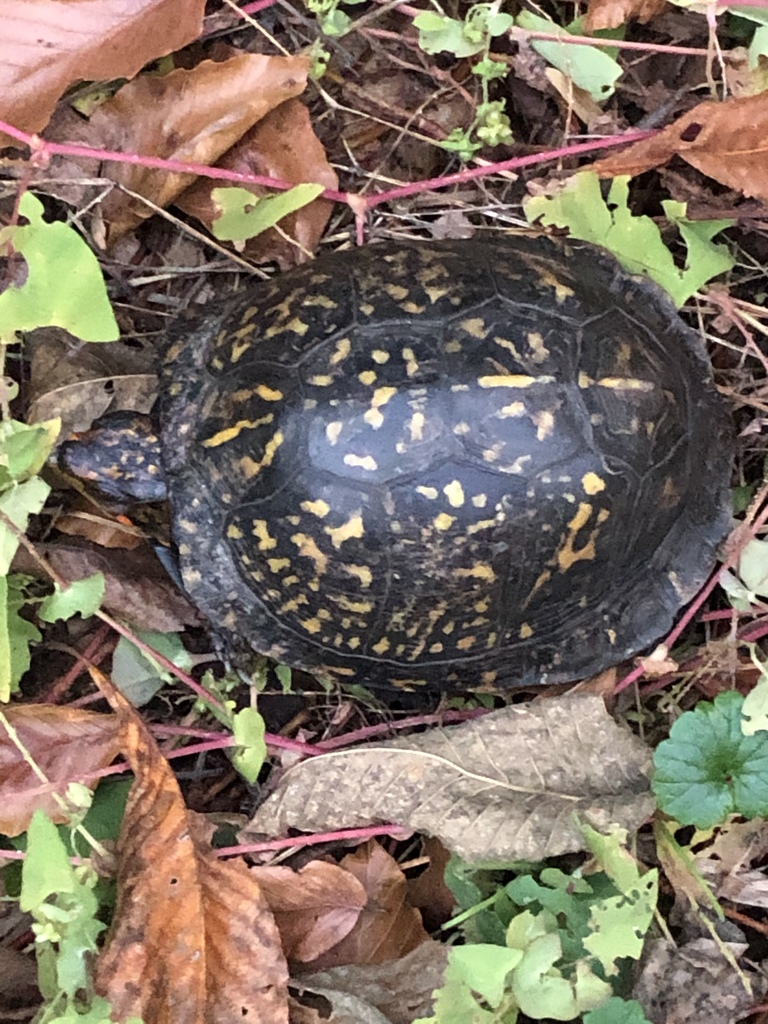 NOTE:  The amount of orange vs. black on the carapace of a box turtle is highly variable–and seems to have some relation to the age of the animal, but is more likely linked to the amount of sunlight it has received–but the markings are always striking!

Particularly during these past few months of sheltering at home, when we, to some extent, have been forced to adopt a more tortoise-like existence of our own, one has to admire the simplicity and resolute manner in which the Eastern Box Turtle goes about its business.  As the new rules of social distancing have dictated narrowing our own travel radius, many of us have felt more grounded than usual, more appreciative of what we have, and more in tune with our immediate surroundings. A greater awareness of the beauties to be discovered within one’s own ‘home range’ can do wonders for mental health–not to mention providing enormous benefits in reduced fossil fuel consumption.  What’s more, ‘slow and steady’ persistence has led many workers to be as productive (or more so!) at home as at a bustling office, calling into question the necessity of many current business models and our jet-setting tendencies.

Thanks to Aesop, how many generations of children have been taught that hastiness leads to sloppiness, that short-cuts don’t pay, that overconfidence catches up with you, that, instead, ‘slow and steady’ wins the race?  Until recently the Box Turtle was nature’s living proof of that principle. Sadly, we humans often forget the very morals we preach to subsequent generations. Up to the spring of 2020, we were creating an entire way of life based on haste, short-cuts, overconfidence, and speed.  In light of our myopic drive to ‘advance’, I suppose it is only fitting that we, as a species, race ahead at such a pace that we don’t even realize our actions contradict the wisdom of one of our most revered fables.  What could be more ironic?