King of the Snakes

In the world of snakes, there are some pretty amazing adaptations.

All are predators, equipped with strong muscles and expandable jaws. Some have excellent climbing abilities, a few have venomous fangs and others have mastered the art of camouflage. Here in Maryland, we have one that reigns above all the others: the eastern king snake.

As the name suggests, the eastern king snake is a top predator. 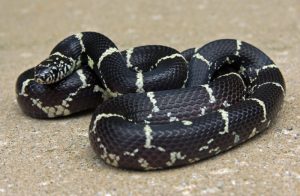 Feeding on a venomous copperhead 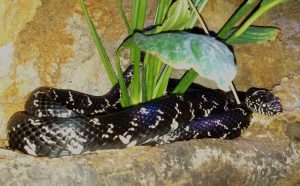 Like many other species, it is a constrictor that squeezes its prey to quickly overpower it, and feeds primarily on rodents, small birds, and small amphibians. But it earned its regal title from the fact that it hunts and consumes OTHER types of snakes – even venomous ones! While most animals shy away from the dangerous copperhead or rattlesnake, king snakes are naturally immune to pit-viper venom, so they are relatively unharmed from their bite and readily prey upon them.

Eastern king snakes can grow up to six feet long in the wild, and are identified by their mainly black body with yellowish-tan “chain-like” markings; These snakes are sometimes referred to as chain king snakes.

Irvine acquired a young male eastern king a few months ago.  This snake was rescued from a demolition site in St. Mary’s County in 2012 and has become accustomed to human contact. He is about three feet long, and can now be seen on exhibit in our nature center!