Just over a week ago Irvine held another of its “Eat, Drink, and Learn” series and welcomed Frank Marsden from Eden Mill Nature Center as our guest speaker. Frank engaged the audience and took us on an amazing journey as we explored the world of animal skulls. He showed us that we could analyze a few key things on any given skull and make a good guess about the species. As he passed jaw bones, partial skulls and antlers around the room, I was reminded of my son and his own interest in animal bones. 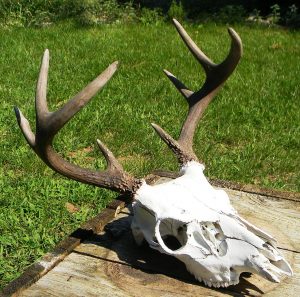 After the lecture, I shared with Frank the story of my son and his affinity for bones. One day I entered his bedroom only to get a whiff of the unmistakable smell of rotting flesh. When I dared to look under his bed, I found his treasured Tupperware of bones. Inside with his collection of various skulls, miscellaneous bones and turtle shells was a somewhat ripe deer hoof and leg.

When I asked my son about his most recent acquisition, he told me that he had come across that “creature clue” while on a walk in our woods. He continued by saying he had learned to look for clues like this while at Irvine’s Summer Nature Camp. He was saving the specimen to bring back to his counselors at Irvine for closer inspection. My little, budding naturalist had spoken.

Frank’s lecture and my son’s attraction to all things natural reminded me of the importance of engaging our children and ourselves with nature. As we plod through January it is hard fathom the arrival of summer, but it is not too soon to start planning.

I sat down with Jack when Irvine’s Summer Camp Brochure arrived in the mail a couple weeks ago and we selected some camps based on his interests (and we got the an early bird discount!).  I hope you will take a look at our offerings as well and make similar plans to get your kids (and yourself) outside engaging with nature. If you need any help or suggestions, just give us a call here at Irvine.