Today was all about using our nature engineering skills to build a dam and discover the best materials for dam building and put ourselves in the mind of a beaver.  We started our afternoon by revealing our chlorophyll experiment from the previous week.  We had collected leaves of different colors, torn them up into tiny pieces, put them in a cup with rubbing alcohol and a coffee filter and waited.  The results are nature’s tie-dye with chlorophyll and other leaf pigments.  We each got a piece of a coffee filter painted with leaf colors, put it in our journal and labeled the pigments.  Green pigments are called chlorophyll and are created by chloroplasts in the leaf.  As Fall and Winter approach the chloroplasts begin to shut down and die, no longer creating green chlorophyll.  When this happens, other pigments that exists all along start to come to the forefront.  The yellows are called flavonoids, the oranges are called carotenoids and the reds are called anthocyanins.  It was also really neat how the different pigments layered themselves in the coffee filter. After we all had documented our leaf experiment we headed to the gazebo for snack and to talk a bit about beavers, since they are the animals we were going to try to embody for today’s biomimicry class.  Beavers are essentially nature’s engineers.  They construct dams (most of the time) to create a safe environment for them to swim in, raise their young in, and to transport materials in.  The water can’t be too deep and it can’t be too shallow so only certain types of creeks and streams are dammed up.  The water also provides a large mote of sorts that protects the beaver family from predators.  What are the benefits of these ponds these beavers create?  Sometimes they can cause damage to property and structures that humans have created.  This does pose a problem for the beaver since they are merely doing what they do best.  Often times the beaver is relocated if their “ponding” endeavors interfere too much.  But in general these wetlands that the beavers create are critical to the ecosystem.  Not only are wetlands one of the most biologically diverse and productive habitats on Earth they provide a lot of benefits to people.  They act as a filter for our water, they store water during floods and they provide food for people and animals.  We were going to create a pseudo dam at one of our low flowing creeks (which would be taken apart the same day) to see just how beaver dams can work!  I passed around a beaver skull and we briefly talked about how beavers are a rodent, which is a type of mammal, that has teeth that never stop growing.  We talked about what beavers eat and what how they get food through the winter.  Beavers cut down trees for their dams and lodges but they also store the food underwater in a cache (the cold water preserves the wood) and eat it through the winter. On our way to the stream we had a great time creating a leaf market using nuts like acorns and hickory as currency to purchase leaves.  I’m not sure who created the market but I do know that Audrey and Noa were the first ones to start it.  It became a really fun game that the kids later named “The Green Market.”  They all decided that an acorn = $1 and with a cap that acorn is worth $1.25.  Just an acorn cap is $0.25.  A hickory nut with no shell (husk) is $0.50 and a hickory nut with a shell (husk) is $0.75.  It looks like those acorns are more valuable!  You can see a picture of their currency they wrote down below in the gallery.  Also near the gazebo we found a very large wholly bear caterpillar and counted the rings on the fallen oak tree.  We briefly talked about why a tree makes rings and the different parts of a tree.  The parts include the heartwood in the center, which is wood that isn’t alive but provides structure and support, the cambium, which is alive and is a very thin layer between the heartwood and the bark and then the bark itself which provides protection.  We found out that oak tree was nearly 60 years old! We continued on to the stream, collecting leaves to sell and buy in the market.  At the stream we talked about the dam we were going to build.  The water was very shallow, only an inch or two, and most of us didn’t believe it could get much deeper.  James found a great place to build the dam and everyone agreed that building it at a narrow point would be the best option.  I asked why and they said it was because they could use fewer materials.  Smart and guess what, that is exactly how many dams are built 🙂  Everyone got to building.  We found a perfect piece of wood that was wide and flat and everyone put rocks and sand and clay like mud around it and the dam started to take shape.  Everyone watched as the water got deeper and traveled further out.  We had to move shoes and backpacks that were in a dry spot that would have been in the water in no time.  Elias put a stick in the ground to monitor how far out the water was moving as the river got deeper.  Good idea, I wish we had thought of that earlier!  Even after the stick was placed in the ground the water traveled a good 3-5 inches further out and he placed the stick at least 20 minutes into dam construction.  A few breaches occurred but were easily patched.  Once the dam had been finished and had been successfully holding water back for over half an hour it was time to breach the dam!  Everyone gathered around as a few of the kids raised the large wood piece and the water rushed through.  I heard a lot of “woahhh!” as the water rushed through like a raging river and after about 30 seconds it was over and the stream had returned to the way it was before the dam.  Everyone went downstream and followed the water. We explored the new part of the stream and moved some smaller rocks around to experiment with the flow of the water and listened as the water rushed far under the rocks.  We found more frogs and a couple crayfish, one was a tiny baby crayfish.  We spent some time exploring the restored part of the creek before heading back to Irvine to meet a nocturnal mammal.  Gathering on the grass we met our Virginia Opossum.  Opossums are nocturnal marsupials that are native to Maryland.  Some of their great features are they eat ticks and they eat a lot of them too!  They also can play dead when they feel threatened and have a very useful prehensile tail which aids them in balance and grip and if they slip off a tree they’re climbing.  Opossums, however, don’t use their tail to hang upside down and sleep.  That would be like you hanging by your pinky fingers, ouch!  We talked about where opossums live, what they eat and some of their adaptations, such as their great hearing, large whiskers and dark eyes to see at night.  The opossum got a few grapes and grape tomatoes as a yummy treat for being such a great animal ambassador for us today! 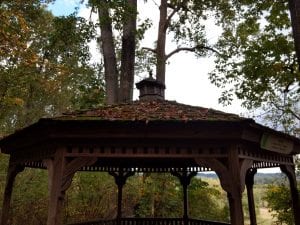 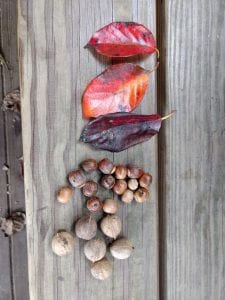 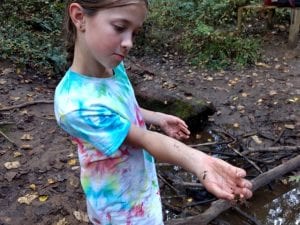 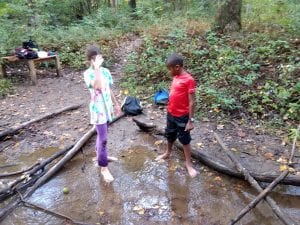 The stick Elias put down to mark the water 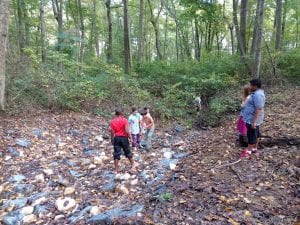 Exploring the restored part of the stream 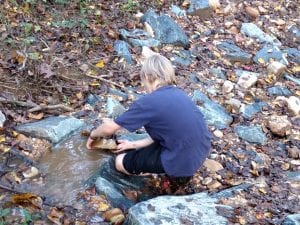 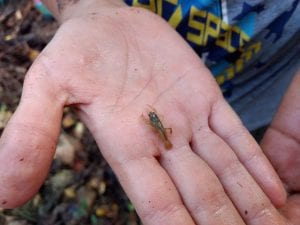 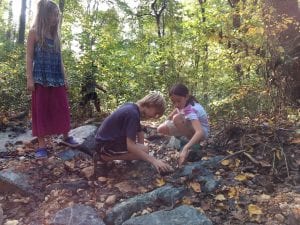 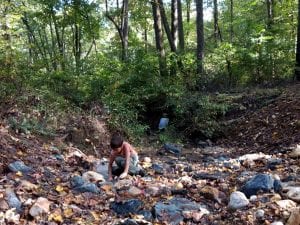 Lev looking at the water moving through the rocks 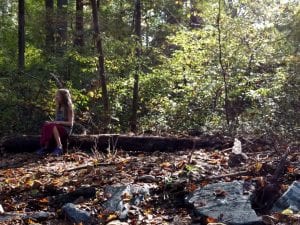 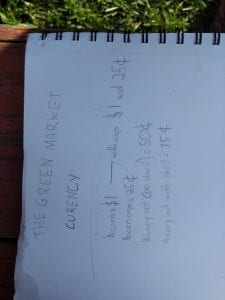 Currency for the “Green Market” 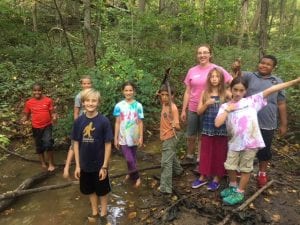 Group photo by the dam 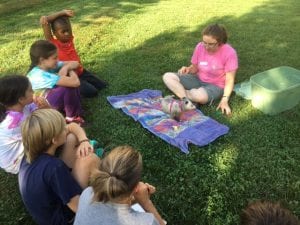 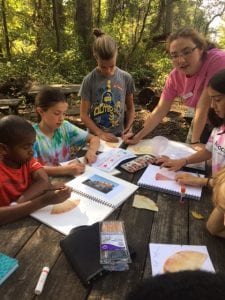 Journaling with our chlorophyll art 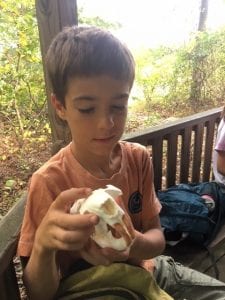 Lev with the beaver skull 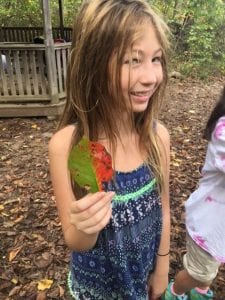 Audrey with a leaf for sale 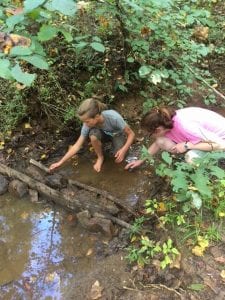 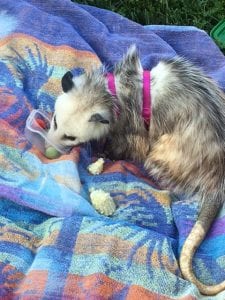