Today was the day of our campfire party where we celebrated around a large campfire with campfire snacks like hot dogs, s’mores and roasted apples.  It was a great opportunity to mingle with the other homeschool group and also mark the half way point for homeschool.  Can’t believe it’s already half over!  We were responsible for the campfire and getting it started so we spent most of our time working on the fire.  To get a good cooking fire going it takes time to build the coals and you usually have the fire die off a few times before it really starts going. We still did our phenology study first thing and we noticed that our plant’s buds are now opened and are flowers!  Spicebush flowers are very small and a yellowish green color.  We also noticed that spicebush puts their flowers before their leaves, which is slightly unusual.  Most of the plants of the forest (trees included) have leaves before flowers.  Maple trees are another tree you’ll notice buds with flowers first.  We then hiked down to the wetlands and found some spring plants growing.  The skunk cabbage is really coming along and taking over the vernal wetlands.  We also found some wildflowers.  Bloodroot is one of the first flowers to bloom in the forest and is a basic but beautiful white flower.  The roots are red, hence the name, and were once harvested by native peoples for dyes.  We enjoyed a sit spot and journaled a little bit before noticing a few more wildflowers on our way to the campfire pit.  We found cut-leaved toothwort and wild violets.  We also found an unidentified white flower that looks a lot like the star of Bethlehem flower, which is not native.  We talked a little bit about Great Horned Owls, which are nesting this time of the year as we made our way to the campfire party.

Today we noticed a big change in the forest, leaves!  It has been two weeks since we were at Irvine for homeschool (well I was around!) but there was a week off for Spring Break.  Irvine changed a lot in that short time.  We walked into the forest that was starting to get very green and lush and went to check out our plants.  Our spicebush now has leaves!  The flowers are all gone.  We counted our leaf clusters and measured the lengths of some of our leaves.

Before we headed off to the forest we made some plaster track impressions.  We pressed tracks into sand and poured in plaster to preserve the track.  It works pretty well!  Maybe we can take our plaster into nature and try it with a real track in the sand down by the creek, hmm.  While we were working on our tracks, Victoria pulled out a history mad libs books, which was really funny and educational!  Thank you Victoria for sharing, it was fun!  While we let the plaster tracks sit to harden we headed into the forest, visited our afternoon circle and along the way saw another spring time flower, May Apple.  After a while these umbrella like plants grow a fruit under the leaves that looks a lot like an apple. Charlie was also rolling logs over and since it had rained it was a great time to check for salamanders.  Sure enough, the first log he rolled over we found a red-backed salamander, the silver morph variety.  They’re rather small salamanders, not growing more than 3-4 inches long and lay their eggs on land, which is unusual for amphibians.  The eggs are very small, smaller than half a grain of rice and are laid in small clumps.  We only saw the one salamander today.  Today we had our boots on and we were ready to get muddy in the wetlands.  We walked down to the cattails and tromped around gently in the wetlands (no sign of frogs yet but we know they’re in other places at Irvine).  We found that the cattails are starting to grow and we also saw how giant the skunk cabbage is getting (check out Week 8’s blog for pictures).  We also dug out our soil sample from the wetlands and compared it to the forest sample.  It was gray in color and we determined after going through our soil type flow chart that it was a silty clay.  After getting stuck a few times in the wetland we headed back to meet a mammal that really likes to strut her stuff. Victoria described the wetland as smelly/stinky and she got stuck a lot.  She also said it was quit dirty, which was evident by the fact she was covered in mud!  I noticed the slopping sound as a the shovel created a suction in the soil as a I dug.  Also my boots made the same sound as I got stuck.  Charlie agreed the wetland smelled a lot.  Wetlands generally smell because of the inundated soil, which can cause a sulfur like smell in the soil.  The water also prevents normal decomposition in the soil so you get a somewhat rotten smell, as well.

Back at Irvine we met a mammal that lives in the forests of Irvine and also has great feet for tracks, which you can sometimes find in the mud.  We met a Virginia Opossum.  She has feet that are a lot like human hands, which makes them great for gripping on branches in trees.  Her tail is also prehensile, so she can use it to grip and climb with, almost like an extra limb.  And no, opossums don’t swing (or sleep) by their tails.  They could use them for that briefly if they slipped and fell or needed to reach something, but that’s about it.  They love to eat insects and fruit and veggies.  In the wild they’ll pretty much eat anything they can get their little paws on.  They have really long whiskers to feel around through their nocturnal world and pitch black eyes, also showing their nocturnal nature.  Their teeth are really sharp, as well but our opossum only munches on her food.  Opossums can be found near wetlands since a lot of the food they enjoy eating lives in and near wetlands.  In fact, in the food web activity we do in Week 8 we had an opossum! 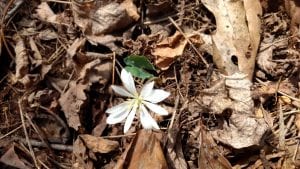 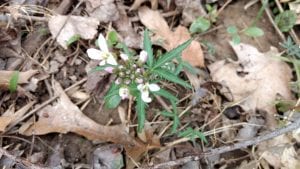 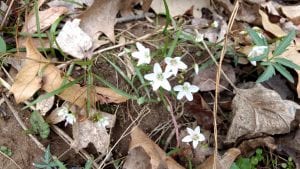 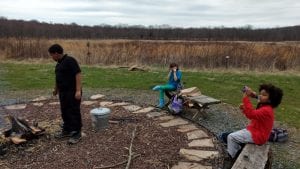 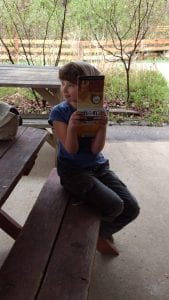 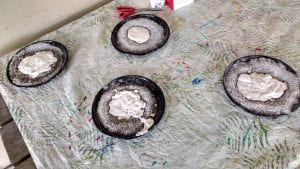 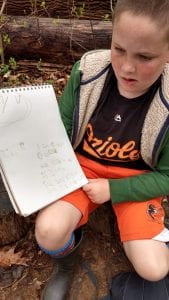 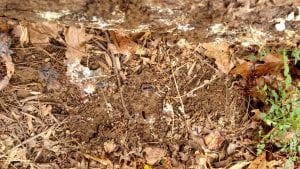 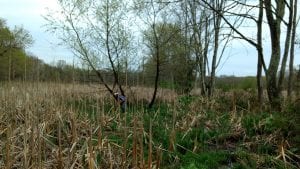 Getting muddy in the wetland 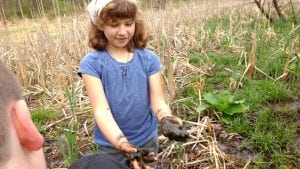 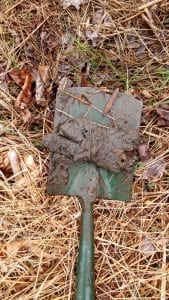 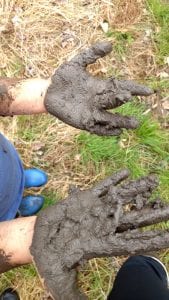 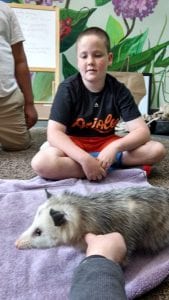