Biomimicry: Stuck in a Web

Today we got stuck in a web as we learned about how scientists are using the engineering of spider webs to save the lives of birds and teach us more about the materials we use for building structures, like steel.  Before we traveled into the world of spider webs we finished our discussion from last week about farming and meadows and what we can learn from how meadows grow.  We reviewed what we had found in our plots and discussed why we found 10 species in each and what that meant.  Did it mean that both plots offered the same value to wildlife and the meadow as a whole?  Or were there differences?  We all agreed that the milkweed plot had a higher value to the meadow than the more disturbed plot with the shorter grass, no milkweed and near a road.  We even went to the grass right next to Irvine to count the species we found there.  Surprisingly we found 6 and here they are: sod (grass), plantain, clover, dandelion and 2 weeds we couldn’t identify.  Your typical lawn, even with some species you can argue are beneficial such as clover for bees and dandelion which can be eaten by people as a very healthy green (and animals too) isn’t very valuable to wildlife.  Back inside we turned the conversation to spiders and their webs. You’ve probably heard the one really cool fact about spider webs, compared to steel it is 5 times stronger by size.  That means, if we were to design a cord of spider web equal in size to a beam of steel it would be 5 times stronger.  We haven’t been able to master this yet but imagine if we could!  We also shared the different types of spider webs that spiders build.  There are a lot and they all serve a different purpose and for the most part only certain spiders build certain types of webs.  There are your typical orb webs (the circular ones you see in the forest catching the light), cob webs, which are essentially a jumble of silk, woolly webs which are similar to cob webs but with more structure, funnel webs which are generally built on the ground and lure prey down a tunnel, sheet webs which resemble a hammock and dome webs which look like, well, a dome!  There are even different types of spider silk too!  We didn’t really go into much more detail because our next task was to design our own spider web.  We took some time journaling about our plots and designing a spider web straight out of our imagination.  I was really intrigued by what people had designed.  Some designed spider webs with black holes and Lev designed one that looked like a misnet for bird banding (or a volley ball net) with a lot of detail.  But what does all of this have to do with saving birds? Below is a link to a website that highlights some of nature’s best biomimicry.  Down the list is one called Spider Web Glass.  Essentially some spiders create a type of silk that reflects ultraviolet rays making it much easier for birds to see.  This keeps birds from flying into their webs and ruining them.  Engineers are hoping to take this same idea and incorporate it seamlessly into glass to help prevent bird strikes on windows.  What a great idea and a solution to a huge problem for birds. After spending some time learning about spider webs, it was time to hike and look for webs and just explore.  On our hike we were also looking for small objects to cast in a mold to make our own spider glass!  Using a silicone mold and casting resin we planned to put something from nature that wasn’t living (unless it was a leaf or small flower) into the resin.  This way we could design our own version of spider glass.

On our hike stopped in the wildlife blind and found our first web!  It was a sheet web that looked like a soft, delicate hammock hanging from the corner of the roof.  Some of us gently touched it and felt how soft the silk was and how fragile at the same time.  We noticed a few chipmunks in the wildlife blind that promptly ran off upon our arrival.  We continued on and headed for the streams in the forest that we had visited earlier in the semester.  Before we got to the ponds we stopped at the Ed Hut for snack and a story.  While everyone munched on snack I read an excerpt from a book called “Braiding Sweetgrass” which was written by a woman of Native American decent.  She is a botanist and professor and tells the story of plants in a very beautiful way.  Her version of “The Three Sisters” legend, which is shared by many Native American cultures, but told slightly differently among them, is very well written.  We made the connection between “The Three Sisters” also known as corn, squash and beans and what we learned about farming last week. There are some spots that we have explored at Irvine that have become favorites and are fun to revisit and see how they have changed.  The ponds were alight with the colors of fall and more empty of frogs and tadpoles.  We did find some tadpoles among the leaves and a few adult frogs swimming around.  We spent some time exploring and found the leaves of a sycamore tree.  Eva and Noa put them in their hair!  The leaves of a sycamore are already rather large but generally smaller trees have larger leaves, why?  Well, when a tree is younger it needs as much of an advantage as it can get when it comes to growing tall.  There is strong competition for light in the forest so the larger your leaves are the faster you’ll grow! It was time to head back so we had enough time to cast our molds.  We stopped at the gazebo, one of our other favorite spots, and found a spot all to ourselves so we could take a couple minutes and listen to the sounds of nature (and other sounds too).  Some of us found a tree, or a stump, some of us merely sat in the gazebo and others laid down to listen.  We spent almost 5 minutes listening, thinking and reflecting.  Afterwards I asked if anyone had anything they wanted to share and immediately people wanted to share what they heard.  We heard the wind in the trees and the leaves, the sounds of insects, I heard feet scraping on the bark of trees as kids positioned themselves in the tree, we heard feet crunching the leaves and birds singing in the trees and in the distance children playing.

Back at Irvine we all picked a mold in the leaf and acorn mold (pictures next week!) to place our items.  We mixed the resin and gently poured it into the mold.  Quickly we discovered certain natural items cast better in the resin than others.  Acorns and their tops float, which made it more difficult to cast and flowers immediately lost their pretty pink color and turned green.  Leaves, ferns and rocks seemed to be the easiest to cast.  What a great experiment, I can’t wait to see how everyone’s “spider glass” turns out! 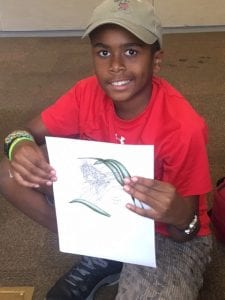 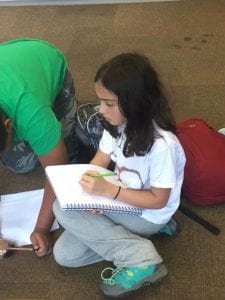 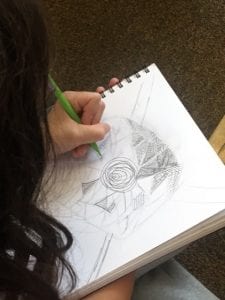 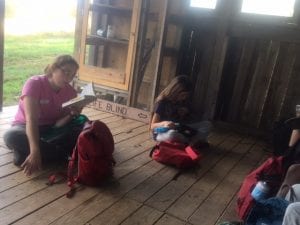 Reading the legend of “The Three Sisters” 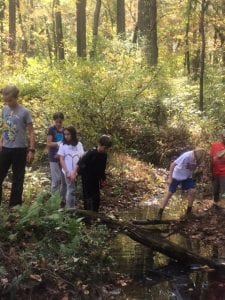 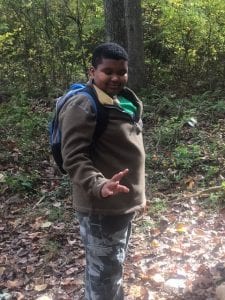 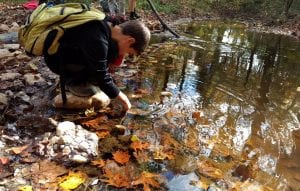 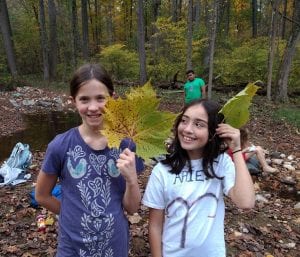 Eva and Noa with sycamore leaves 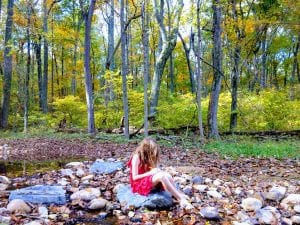 Audrey loves to journal at the creek