Welcome to everyone!  Today was our first day of Earth Friends Biomimicry class!  It’s going to be a really exciting semester where we get the opportunity to explore all of Irvine’s ecosystems and learn about native plants and animals, some that have even inspired various types of technology and innovations.  Before we jumped into Biomimicry we went around and shared our names, favorite food, favorite color and any other favorites we had.  It turns out a lot of us love pizza and I believe Yellow was the only color of the rainbow not chosen as a favorite. Next we discussed some of the guidelines we hope to all follow in our class and then we hit the trails!  Before we got very far we stopped at a Spicebush and explored the smell of the leaves and stems and of course noticed the bright red berries dotting the plants.  I plucked one off and asked if anyone wanted to try it.  I got many hesitant looks (as I should, it’s not the best tasting berry).  A lot of us touched a berry to our tongues to get an idea for the flavor and all agreed, it’s really spicy and not all that great tasting.  Spicebush is a great plant though and the berries can be dried and added to foods and teas for flavor and the stems can be boiled and made into a tea as well.

Continuing on the trail we stopped and I asked everyone if they knew what “burrs” were because burrs helped inspire a form of technology they all have likely used.  I pulled out a jar of burrs I collected and demonstrated how they stick to clothes.  We found a few burr plants right there on the side of the trail too!  I asked how why they thought the burrs stuck to clothes and everyone agreed it was to help them travel, because after all, they’re seeds!  The two plants the burrs were from were yellow aster and enchanter’s nightshade.

At the Gazebo we enjoyed snack and talked about Biomimicry.  What is Biomimicry anyway?

“Biomimicry is an approach to innovation that seeks sustainable solutions to human challenges by emulating nature’s time-tested patterns and strategies. The goal is to create products, processes, and policies—new ways of living—that are well-adapted to life on earth over the long haul.”

The core idea is that nature has already solved many of the problems we are grappling with. Animals, plants, and microbes are the consummate engineers. After billions of years of research and development, failures are fossils, and what surrounds us is the secret to survival.” https://biomimicry.org/what-is-biomimicry

Before I read a definition of Biomimicry, I asked what people thought it was?  Most of us agreed it was some form of copying animals or plants, learning from them and making things for ourselves.  That pretty much sums it up!  An important component of Biomimicry is the “sustainable” portion.  Biomimicry strives to create things that will help people over the long term.

How do the burrs all play a role in this?  Well, burrs helped Swish engineer Georges de Mestral invent modern day velcro in 1948.  He discovered that after walking with his dog in the woods there were burrs clinging to his dogs fur.  He noticed that they stuck to dog fur and his clothes really well and decided to take the burrs to a microscope.  Under the microscope he found that the burrs used a system of strong hooks to hold onto their mode of transport and through that method helped invent velcro.  On week 2 we are doing an experiment with velcro to test its strength!

It was time to explore a new ecosystem, Irvine’s meadows.  The meadows have recently undergone a restoration, where wetlands have been reintroduced in the form of seasonal vernal pools and more lasting ponds fed by streams that have water most of the year.  At the founds the kids found mosquito larvae by the thousands, green frogs and sulfur loving bacteria that create slicks that look like oil.  When you touch the “oil” it actually breaks into pieces and leaves an orange residue your finger.  We explored the ponds for a while, turning rocks over (and turning them back) and just exploring what a mini vernal pool looks like and the animals and plants that live around it. After, we ran up the meadow and found milkweed seed pods that have dried and explored their silk strings holding seeds.  We also explored some unopened pods and noticed the layers of the milkweed pod looked really interesting and described it as looking like a sponge, the kids said the seeds looked like scales in how they rested in the pod, I thought the lattice under the first layer of skin looks like bone marrow and another kid said it reminded them of wall paper.  After some milkweed exploration, with sticky fingers, we sat down and played a game called Poison Dart Frog.  In this game a herpetologist sits in the center and they are trying to discover who among the circle is the poison dart frog.  The rest of the kids are flies trying to not get eaten.  When they make eye contact with the poison dart frog, the poison dart frog sticks their tongue out and eats the fly!  The herpetologist needs to find the frog before all the flies get eaten.

Back at Irvine we met a real frog.  This frog is called a Leopard Frog, for its spots, and we learned how during the winter some frogs have a form of anti-freeze in their bodies to prevent themselves from being frozen to death in the cold.  This anti-freeze is a special type of glucose that keeps their cells from forming ice crystals, which would turn them into a frogcicle.  Proteins also help the frog out too.  Earlier, I had frozen two jars.  One was 50/50 sugar and water and the other was just water.  We noticed how the sugar water didn’t freeze all the way (the other was a solid cube of ice) and it was more like a slushy.  This mimics the way a frog keeps itself from freezing (and of course we had to eat a little of the sugar mixture too!)

To finish off the day we wrote down our names and thought of words or words that fit with our name to describe ourselves.  I saw everything from Orioles, to soccer to unique and awesome.  It was indeed an awesome day! 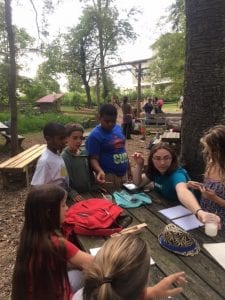 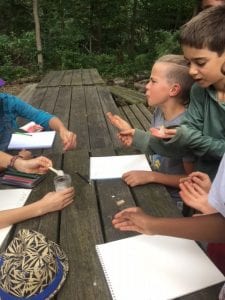 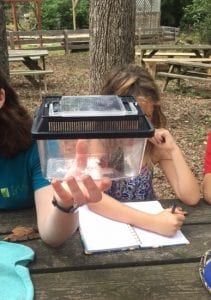