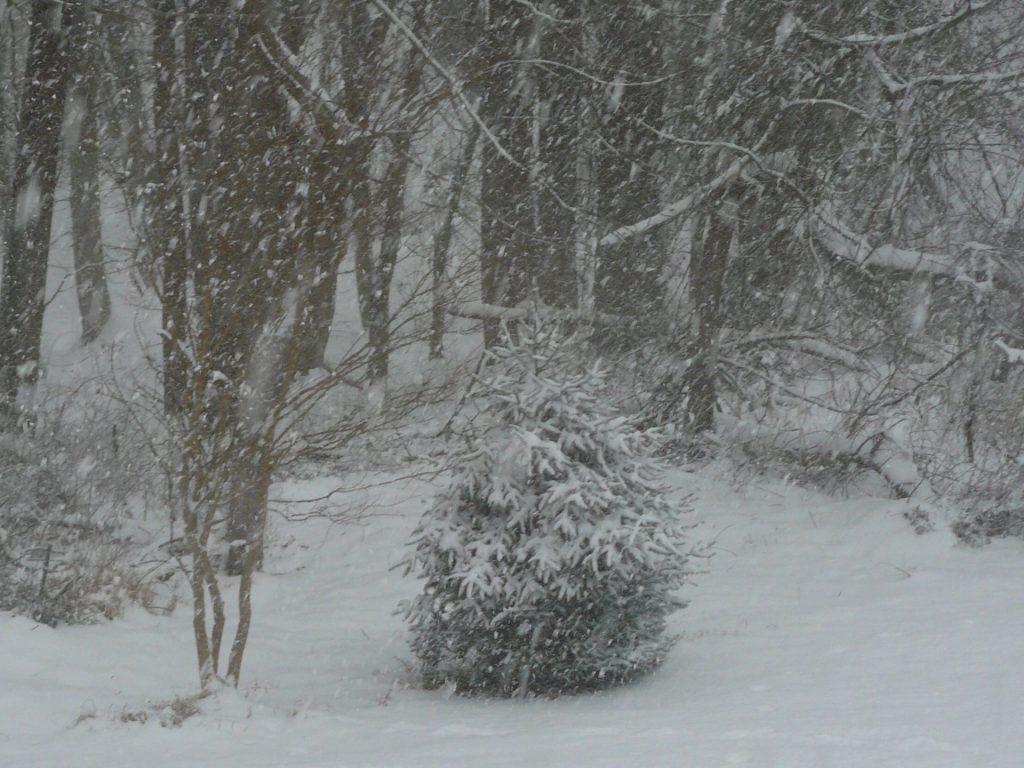 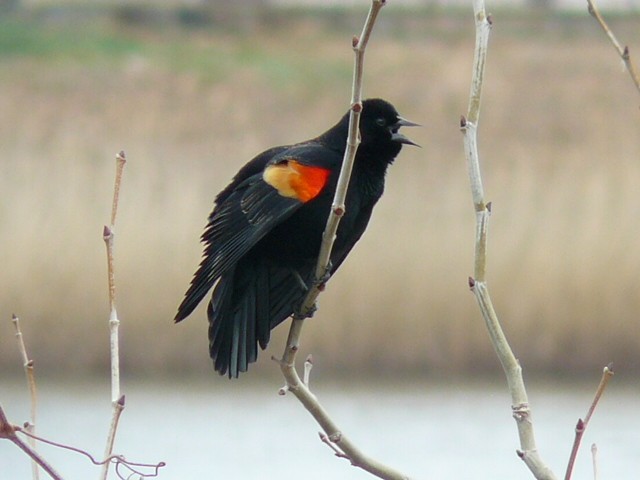 As I sit by my living room window, snowflakes the size of teacup saucers fill my view, making it difficult to see buildings just a few doors down. Our bird-feeding station has finally been discovered by the flock of Red-winged Blackbirds that winter in the pondside phragmites at the bottom of the hill a short block away. Previously this fall we had seen no more than four Red-wings at our feeders; I just counted 45 and I wasn’t finished when they all took flight. Historically, they seem to arrive in hoards every time there’s a winter storm; of course, it’s been two years since we’ve had any significant snow, so it seems out of the ordinary to find the ground covered with blackbirds today.

On three different occasions this afternoon, we’ve watched one of our 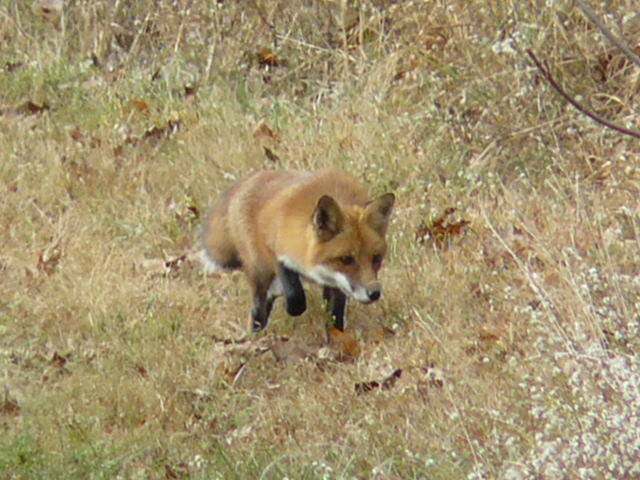 neighborhood Red Foxes frolicking in the snow at the edge of the woods behind our property. Each time, the gleeful fox has half-heartedly slinked by our feeders–just to see if an unsuspecting songbird can be caught off-guard–before romping back into the woodlot; thus far no attacks, but that could change with time, as both predator and prey became hungrier farther along in this storm. It’s a truly beautiful sight outside today and seems as if Mother Nature is suddenly trying to make up for the mercy she showed upon us last winter. Depending on your viewpoint, some may appreciate today’s winter wonder as a glimmer of hope at the end of an incredibly tough year; others may view the weather inconvenience as one more thing piling on and wish to ask, ‘Doesn’t Nature know the toll that 2020 has taken on all of us already?!?’

With that, my thoughts go to the tiny Pacific-slope Flycatcher that has been reported over the past three days near the southern end of the NCR Trail. It’s made news in local birding circles, as it represents only the fourth recorded appearance of this species in Maryland and the very first in Baltimore County! A nondescript olive 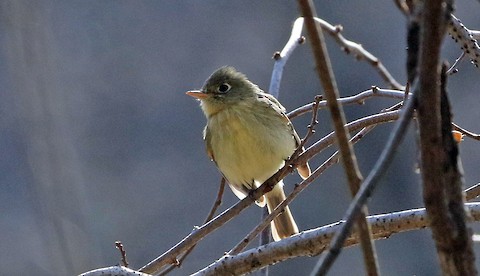 songbird (just like all members of the genus Empidonax), only 51/2 inches in length, this bird is supposed to be wintering on the Pacific coast of Mexico right now! Instead, it’s fending for itself in a small patch of brush in Cockeysville during a particularly heavy Nor’easter appropriately named Gale [sic.] Despite all of the recent advances in our understanding of complex ecological principles and interrelationships, there are still many unsolved mysteries in the world of ornithology. One of them is the seemingly inexplicable arrival late every fall of small numbers of western flycatchers and hummingbirds on the east coast. Indeed, winter conditions here tend to be more harsh than had these passerines simply remained on their California breeding grounds year-round. Why migrate at all, if this is where you’ll end up? Instead of heading south for the winter, these disoriented individuals head due east, and eventually end up being detected in the Mid-Atlantic or New England, where there’s a high density of birders. The phenomenon seems to have increased in recent years, although it remains unclear how much of that is a direct result of the increasing prevalence of birders in our society and/or the heightened use of ‘hotlines’ and websites on which news about rarities can be shared instantly. Indeed, in my 40+ years of birding, I can recollect six occasions on which I stumbled upon a truly out-of-range ‘mega-rarity’ that had not yet been reported by anyone; three of those six were various species of flycatchers from the western U.S. suddenly appearing in Maryland or Pennsylvania.

The hummingbird situation is less concerning, for the majority of 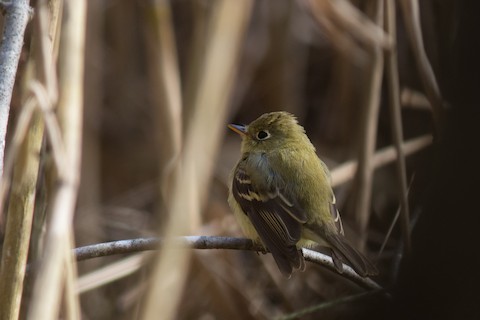 reports of west-coast strays are cases of birds that show up at sugar-water feeders; once residents become aware that they are feeding a truly out-of-place rarity, most go to great lengths to continue feeding and help the little hummer survive the winter. The case of flycatchers is more befuddling, for they subsist on flying insects. Good luck finding that kind of prey on a day like today. Couple the freezing temps with the ample snowfall, and I’m quite worried that Gail may be the end of the little displaced flycatcher that was first found on Sunday, just south of Papermill Road. Already, the roughly two dozen birders who have reported seeing it had noticed that it seems most active when the afternoon sunshine (remember, it was 64o just a few days ago!) hits the dense vegetation at the edge of what is known as ‘Ashland Pond.’ Under those sunny and warm conditions, even in December, plenty of insects hover just above the water surface–perfect for a species that hunts via agile mid-air sallying. However, a day like today will not be kind to this little bird.

Sadly, this flycatcher is likely wishing it had actually gone south for the winter–just like many of us. Ordinarily the first major snowstorm of the season is all it takes to prompt ‘snowbird’ retirees to pack up for southern climes, but that’s not really an option this year. Given the rapid spread of coronavirus and tightened travel restrictions, few people are going anywhere at the moment. Bahama breezes, Sanibel seashells, and Tampa tanning will have to wait until next winter, once the newly-created vaccines have been widely distributed and pandemic panic is finally a thing of the past. However, for you nature lovers, I would like to propose a most enjoyable ‘tropical escape’ of sorts that you can enjoy from your own home, here in snowy Maryland. Over the past year, in response to the ballooning interest in and need for online learning, the Cornell Lab of Ornithology has really beefed up the ‘All About Birds‘ educational section of their impressive website. One of the newer features is a series of live bird cams. Until recently, remotely-connected nest-cams were a popular way to document the gradual egg-laying to nestling stages of avian reproduction. Just as interesting–and with far more biodiversity and unanticipated occurrences–are feeder-cams, and there are now four incredible examples on Cornell’s site. One shows an active feeding station right at Cornell’s Sapsucker Woods in Ithaca, New York. Another displays a couple of bird feeders in Texas, while a third, stationed in Ontario, entertains rarely seen visitors from the boreal forests, like Canada Jays, Common Redpolls, and Pine Grosbeaks, in a locale so northerly that there was already snow on the ground in mid-October! 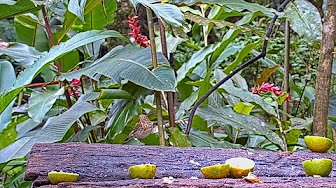 By far my favorite, however, is the large platform of fruit-feeders located at a lodge in Panama. Full of exotic tropical birds I’ve never seen–and occasional familiar visitors from our area that winter in Central America–this 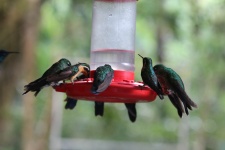 live site immediately captures and holds my attention, taking me away to warmer, more carefree days–literally providing a brief moment of ‘virtual vacation,’ which seems especially calming right now in 2020. I highly recommend you visit the site! Watch it live for awhile, but also peruse the many ‘highlight clips’ that are stored on YouTube; you will be amazed, I promise. My college-aged son has been watching it recently and seen toucans, tanagers, orioles, and gobs of hummingbirds, all feeding among a stunning assortment of rainbow-plumaged critters most of us can only dream of attracting to our feeders. What’s more, he’s tuned in at night and seen small flocks of bats at the hummingbird feeder and slender opossums (a different species than our Didelphis virginiana) dining at the feeding tray. To witness a most unusual ‘circle of life’ moment, view the fascinating wood-rail vs. bananaquit encounter–but perhaps when the youngest family members aren’t around!

Ah, the world keeps getting smaller. Like many from my generation, 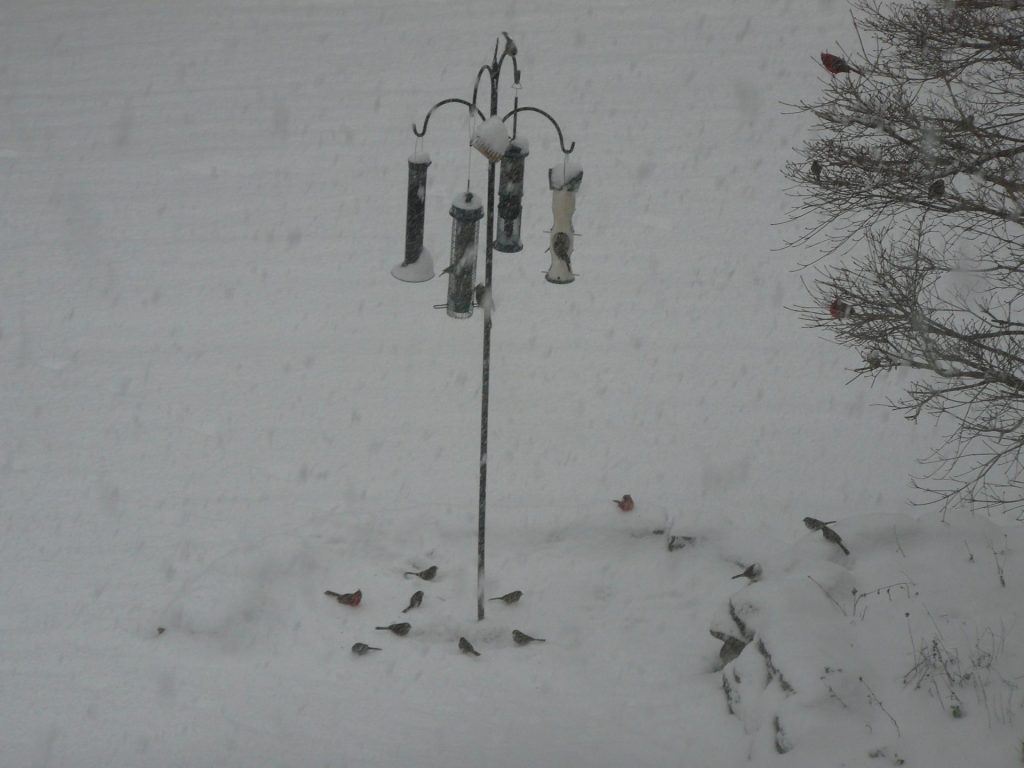 I view modern technology as a double-edged sword, both appreciating how communication, data, and factual information is always just a key-stroke away, yet well aware of the potential downsides of social media, video games, and cyberspace, in general. As a lifelong educator, I’m wary of the abuses and addictions that can come when children become completely absorbed by screen time. When it comes to ‘virtual birding’ through feeder-cams, however, I’m one of the biggest fans . . . particularly on a cold, snowy day like today!    –BR