Nature is certainly full of surprises. Just when you think you’ve seen it all, Mother Nature hurls an unexpected curve ball which catches you completely off guard. Such was the case in late September, when experienced bird banders in southwestern Pennsylvania netted an extreme rarity that one biologist likened to discovering a unicorn! The finding has been the subject of dozens of articles and references in both print and online scientific media in the two weeks since–both because of its uniqueness and the fact that among the few people who have heard of it before, the majority don’t fully understand the phenomenon. Most would agree that this encounter was Ripley’s Believe-It-Or-Not material.

Some background: The bird in question was captured in a mist net at the Powdermill Nature Reserve, in the Laurel Mountains about six miles SSW of Ligonier, PA. An incredible birding site in a 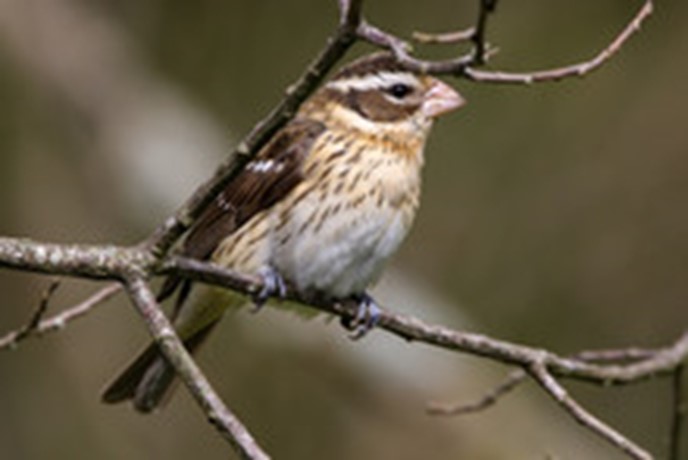 relatively unknown region, Powdermill was established in 1956 as a field station affiliated with Pittsburgh’s Carnegie Museum of Natural History. At Powdermill they manage one of the nation’s largest and longest-running banding facilities, netting an average of 13,000 birds annually–more than 1% of the total of 1.2 million that are banded throughout all of North America in a typical year. This is, in fact, the centennial year for the United States Geological Survey’s Bird Banding Laboratory. The nationwide program got its start in 1920, and Powdermill is one of just a handful of banding sites which have contributed data steadily for well over half of that century. Over six decades, in which they’ve banded close to 800,000 individual birds, researchers at Powdermill have witnessed what they saw last month only five times.

The bird that caused all of the fuss was a Rose-breasted Grosbeak–a robin-sized forest canopy dweller that nests throughout the Appalachians and into southern Canada. One would have to visit the oak-hickory forests of western Maryland to find the species summering in our state. However,

Rose-breasts do migrate right through the rest of Maryland in decent numbers for several weeks each spring and fall, generally peaking in the first half of May and the latter half of September. Finding an adult male in its stunning breeding plumage of large blocks of black and white accented by a large blood-red triangle right in the front of the chest–not unlike a white t-shirt that was beneath a bad bloody nose–is a real treat for anyone, birder or not. Still, the species itself is not a particular rarity, certainly not one that would generate the media storm that resulted from Powdermill’s recent celebrity capture.

banding was that it was a bilateral gynandromorph! (Try saying that five times fast.) Colloquially referred to as ‘half-siders,’ gynandromorphs are extremely uncommon organisms that are half female and half male. The etymology of the term itself (gyn = female; andro = male; morph = form) makes good sense to anyone who knows just a touch of Greek. To be clear, gynandromorphs are not the same as what biologists call hermaphrodites in the animal world nor a synonym for what current human culture would call intersex. Both of these latter terms refer to organisms that possess both male and female sex organs and associated sexual characteristics. In many primitive animals (snails, slugs, and earthworms, for instance) hermaphrodites are the norm, as these creatures do not have separate sexes. Intersex people are born with a mix (not necessarily equal) of female and male sexual characteristics, and internal organs may not necessarily match outwardly visible traits.

In contrast, a gynandromorphic organism IS essentially half male and half female . . . basically, two genetically distinct individuals fused into one. Although the causes are not entirely understood, the condition is generally believed to be brought about by a genetic abnormality very early in the process of cell division (mitosis) following fertilization. After replicating chromosomes, one of the dividing cells does not pass on the chromosomes equally during mitosis. Instead, one of the two new cells receives only a partial set of sex chromosomes. This leads one cell into male development, while its partner develops as a female. 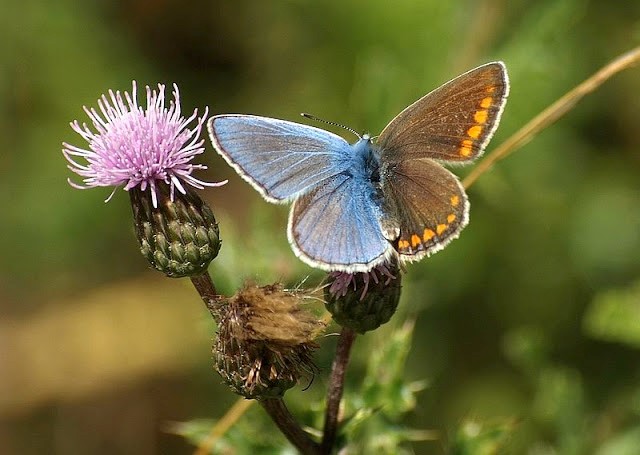 Gynandromorphy only seems to occur in organisms that have a fairly simple development process, in which chromosomes determine virtually all aspects of the sex

characteristics. The situation is most commonly known from entomology; it was first discovered in fruit flies (Drosophila) over a century ago and has been observed with some frequency in butterflies, moths, dragonflies, mosquitoes, and even a few bees. It also occurs in many crustaceans, such as crabs, lobsters, and certain spiders, as well as in birds. Mammalian development is more complicated and hormones play a significant role in determining sexual traits; hence, scientists believe true gynandromorphy does not occur in humans, nor other mammals. 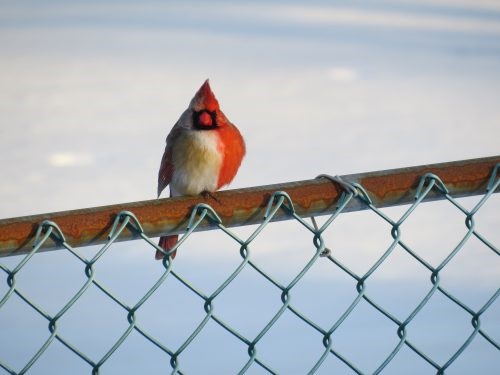 While we know gynandromorphs are exceedingly uncommon, we may never be able to quantify just how unusual

they are. Even in the butterfly and bird worlds, where bright colors are prevalent, many species show no outwardly obvious differences between the sexes. How can one recognize an organism that is half male and half female, when males and females of that species look essentially the same? Thus, gynandromorphy is only recognized in species that display sexual dimorphism. It seems easiest to notice in birds; every few years one hears a report of another gynandromorphic Cardinal–they’re a common species, frequent our backyards,

and have very different coloration based on sex, all of which leads to a high detection rate if any individuals do show aberrant plumage. However, many biologists believe that gynandromorphy occurs more commonly among insects than other animals. Depending on the species, I have seen estimates of the frequency of a gynandromorphic individual ranging from one in 6000 (for some butterflies/moths) to one in 50 million or more. The actual figure may never be known. 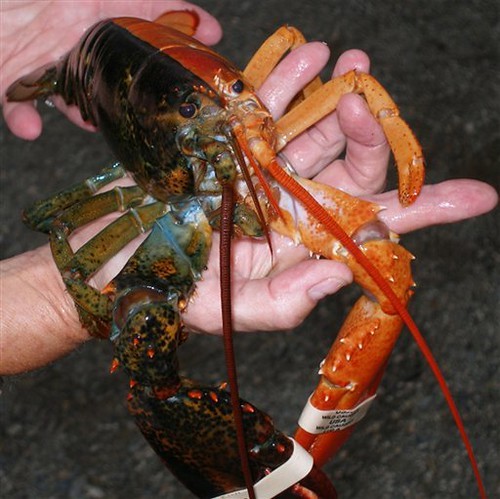 Another complicating factor is that gynandromorphy can exhibit itself in several different ways. These different manifestations seem to be largely dependent on how early in mitosis the genetic error occurs. Some individuals show a piebald (or splotchy) appearance, with certain portions of their body demonstrating female characteristics and other patches of tissue exhibiting male traits, in a random mosaic with no apparent pattern. Other organisms may display axial gynandromorphy, in which the anterior end of the animal is one sex, while the posterior end is the other. Clearly the most striking are bilateral gynandromorphs, which are truly bisected right down the middle, with the left half being one sex and the right half the other.

This brings us back to the recently banded Rose-breasted Grosbeak at Powdermill. Because it was a hatching-year bird (as many avian encounters are this time of year), it had not fully achieved its distinctive blocky color combo of black, white, and roseate plumage on its male half. Had it been an adult bird, the contrast between its right and left halves would have been even more remarkable. However, Rose-breasted Grosbeaks do have a little trick up their sleeves–or, shall I say, in their ‘armpits’? They are one of only a handful of North American songbirds to display bright coloration that differs by sex in a hard-to-see location–their underwing coverts. Males possess pinkish wing linings, while the generally more drab and streaked females actually reserve their brightest hue, a lovely golden shade, for the underside of their wings. Among avifauna, bright underwings are uncommon to begin with; for the two sexes within a species to flash different colors when they fly is even more unusual. Throw in the miniscule likelihood of encountering a bilaterally gynandromorphic bird at all, and the researchers at Powdermill did indeed catch a unicorn in their nets–or rather, a half-unicorn, half-dragon–wearing mismatched socks. Most of us can only dream of stumbling upon something like this out in nature. But, unlike today’s members of Congress, you can bet that at least some of us birders will be looking just a little more carefully to see things from both sides. 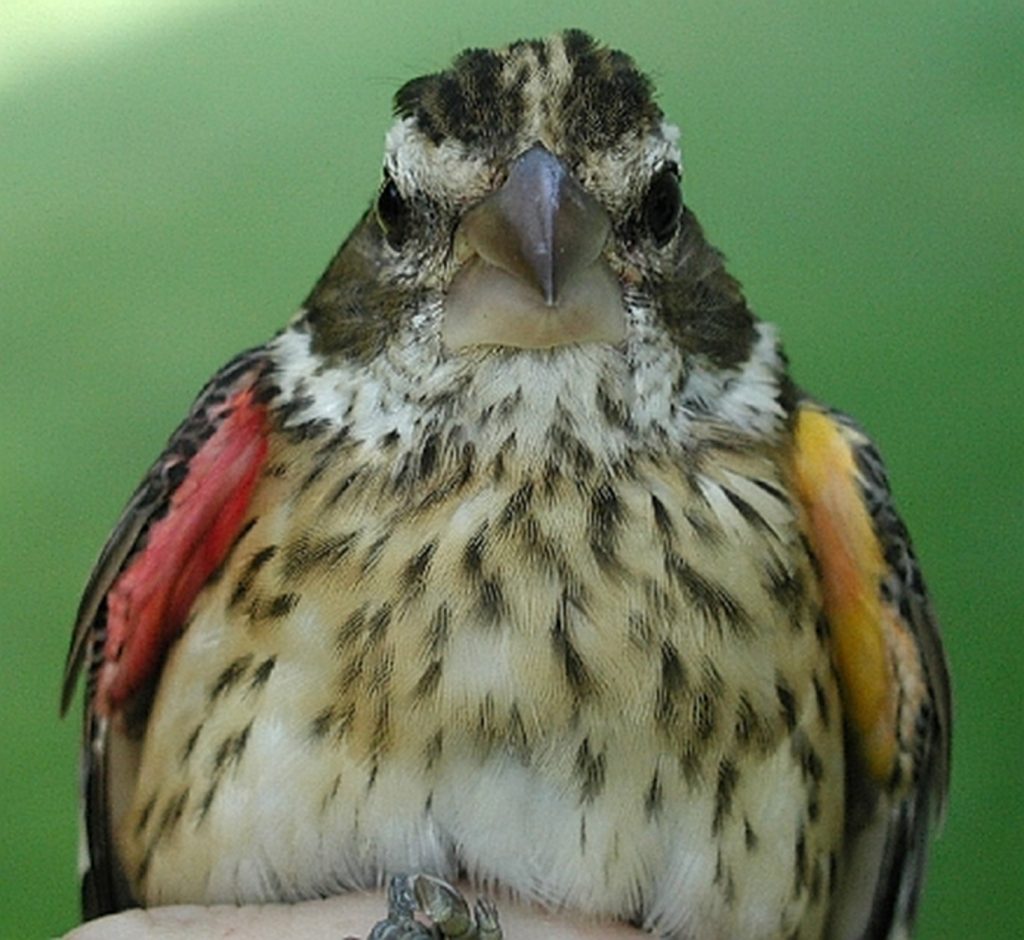 The only other gynandromorphic Rose-breasted Grosbeak (in transitional plumage) to be caught at Powdermill: Robert Mulvihill and Adrienne Leppold, 2005/Powdermill ARC