The Ghosts of Summer

One of my favorite things to look out for while on late summer strolls through the woods are the ghosts—no, not of the supernatural variety, but a peculiar little plant! 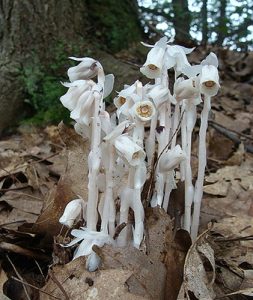 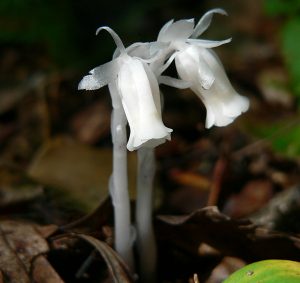 Indian pipe, also known as the corpse flower or ghost plant, can be found popping up in unusual bunches from the damp leaf litter of the deciduous forest in the later part of the season. It’s earned the melancholy names thanks to its waxy pale color and preference for growing in dimly lit habitats. What truly makes this a unique plant is the fact that it has no chlorophyll, the chemical that allows most plants to gain energy from sunlight and also gives many their vibrant colors.

So how does this eerie flower survive?

Indian pipe is considered “epiparisitic”, meaning that it gains most of its nutrients from a fungus that in turn has a mutualistic relationship with another plant—essentially, the fungus takes nutrients from the host plant, and then the Indian pipe steals some from the fungus. But Indian pipe doesn’t hang out with just any old fungus—they form relationships with a few specific species, and for this reason they are very hard to successfully transplant.

For most of the year, Indian pipe exists as a root mass, hidden underground. When the time to flower arrives, the milky stalks emerge and form the drooping “pipe” shape. Once they are pollinated, the heads turn upwards and release their seeds before dying back to a black, jelly-like state (perhaps another reason for the morbid nicknames). 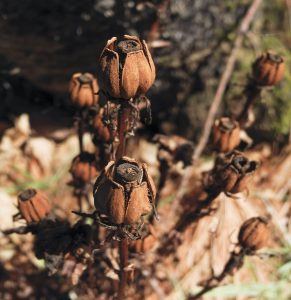 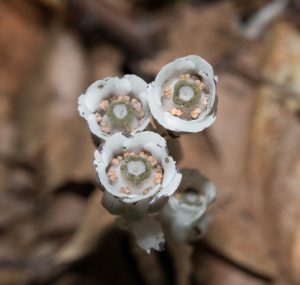 After pollination, the flowers point up to disperse seeds

This summer, Irvine staff transplanted some of these ghostly flowers to our Woodland Garden area! They have already gone to seed and turned black, but while out on a late summer hike you may still be able to catch a glimpse of this fascinating plant.