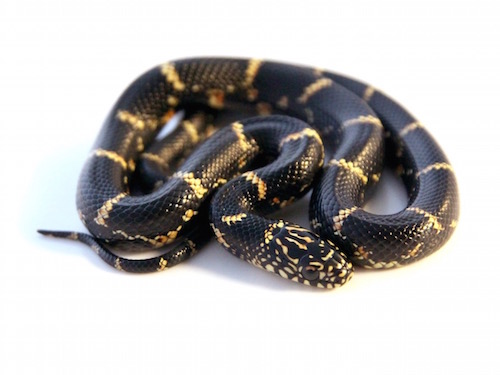 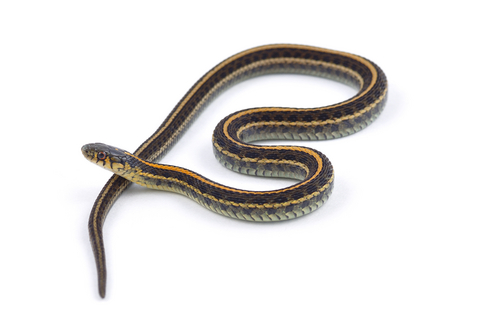 For the past few months two exhibits at Irvine have been empty, but the “No One Is Home” signs have been removed and are now inhabited by some very special snakes!

Our new Eastern King Snake was donated to Irvine by Mr. Randy Greer after being a captive bred and raised pet/breeder snake.  When Mr. Randy found out that we were in search of a King Snake that needed a home, he was thrilled to give us one of his snakes! She is estimated to be between 5-6 years old and she shed just before coming to Irvine, so she was nice and shiny for us! Mr. Randy and his family are so happy to visit her and glad that she gets to be used for educational outreaches to inform the public on just how special King Snakes are.

King Snakes are a black snake with yellow chain-link patterns down their sides. This coloring characteristic is why they are often nicknamed “Chain Snakes.” They are a fairly large snake, easily reaching five feet in length. The many subspecies of King Snakes inhabit much of the United States and therefore have varying colors depending on their geographic location. The Eastern subspecies has the typical black coloring with white to yellow patterning, while the Florida subspecies is speckled with tan and brown hues. King Snakes aptly receive their name due to the fact that they are “king of the snakes” in their range. Besides typical snake food such as mice, rats, and amphibians, King Snakes feast on other snakes! Any snake that is smaller than them may fall prey, even venomous species! King Snakes are immune to venomous snakes within their home range, meaning Eastern King Snakes in Maryland are capable of eating the two venomous species found in Maryland – Copperheads and Timber Rattlesnakes. To explain this better – an Eastern King Snake cannot eat a Copperhead that lives in Florida, same as a Blotched King Snake cannot eat a Copperhead in Maryland. King Snakes are not immune to venom from different localities of venomous species.

When visiting Irvine, you can find our King Snake in the first exhibit. She is often at the very top of the enclosure, basking in her heat lamp on the highest ledge. Our other new snake addition is the Eastern Garter Snake. He was found close to Irvine a backyard. Ms. Cheryl and her granddaughter Emmalee came upon the snake when the dogs started barking at something. When moving the snake to a different location it was found that the snake had a missing tail and an injured eye. They decided that the snake needed assistance and turned to Irvine for help. The snake was taken to a veterinarian and was given a “tail tuck” to fix the exposed bone from the injured tail and surgery on the inflamed and bulging eye. He was deemed non-releasable due to being blind in one eye and Irvine had the room to take him in as an ambassador. Little Emmalee is particularly excited about coming back to Irvine to visit the snake she helped!

Garter Snakes are one of the most common snakes in Maryland and often the culprits behind my favorite question of “what is this snake?” They are a small, greenish-brown snake with three longitudinal yellow stripes down their body. Sometimes the stripes can look speckled and the colors can run more blue than green. Thus, many Garter Snakes look vastly different from one another. They are found in a variety of habitats from woodlands and meadows to swamps and marshes. They spend much of their time near a body of water as their favorite foods are frogs, toads, salamanders, tadpoles, fishes, and worms. They are also highly adaptable and have no problem making their homes in suburban areas.

When visiting Irvine, you can find our Garter Snake in the fourth exhibit. He is often slithering around the ramps in his exhibit or basking on the ledge under the heat lamp. A Note About Animal Donations At Irvine:

Irvine may not always be able to take in animal donations. We have a list of acceptance guidelines that we ad-hear to. Both the King Snake and Garter Snake fit in those guidelines when we accepted them. If you have a pet you are no longer able to keep, there are multiple locations that could accept your animal. If Irvine cannot, we will provide you with some other contacts in order to ensure the animal is taken care of. Please do not release a pet into the wild. Not only is it detrimental to wildlife (diseases, competition), but it is often times a death sentence for the pet as it doesn’t know how to function in the wild!

If you find a sick or injured animal, please take it to a wildlife rehabilitation center. Irvine does not have the supplies or staff capable of rehabbing animals and vet bills are expensive. Animal Care Coordinator, Jenna, recommends Frisky’s Wildlife and Primate Sanctuary after having worked with them before. Owner and operator, Colleen, is a fantastic woman who is very passionate about her job. However, if Frisky’s is out of your driving range there are many other centers throughout Maryland and Irvine would be happy to provide you with advice and contacts.