Sing-A-Long with the Sparrows

The first animal to great visitors upon arrival at Irvine nature center is one many are familiar with, found anywhere from rural farms to bustling city streets, on every continent except Antarctica!

In fact, the house sparrow is the most abundant bird in the world. They are not actually native to this area though; they were introduced to New York City in 1851 from Europe, and now flourish across the country. They do best in close proximity to humans—usually seen as that little bird stealing crumbs on the sidewalk, or singing cheerily from the rafters of a store. 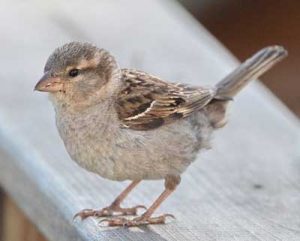 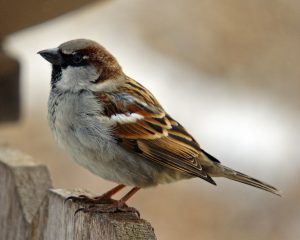 Irvine is home to a male and female captive house sparrow. Our male house sparrow came to us from a local family last spring. He was found as a nestling, without any true feathers. After three months of caring for him, the family realized his flight feathers in one of his wings were not developing properly. And as happens all too often, during the months that he was being cared for he became too familiar with humans, and it was determined that he would have trouble surviving in the wild. Observant visitors will often notice that his beak is a little crooked—this usually occurs when a baby bird is hand reared by humans and fed from the same side continuously. With routine trimming it poses no threat to his health and with proper food and care, a house sparrow could live to be 15 years old!

Our female house sparrow is not yet on exhibit, as she is still adjusting to life at Irvine. She came to us from Chadwell Animal Hospital after having a wing amputation due to a severe injury. We hope that this summer we can introduce her to our male and they can keep each other company on exhibit! 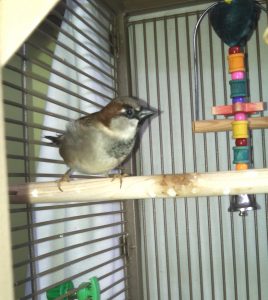 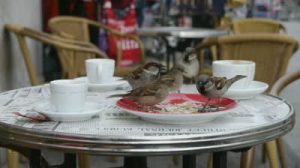 Sparrows eating in an urban setting

If you have the chance to visit the nature center, feel free to whistle, sing, and talk to the house sparrow! Naturally, they are very social birds, and interaction with guests is great enrichment for our bird, keeping him happy and healthy!