Reflections on Why I Give a Dam About Beavers

Last Saturday, an unusually brisk spring day, an old friend and I quenched our corona-quarantine craving for the outdoors by hiking several miles of the Gunpowder South Trail, between the Masemore Hemlock area and the Prettyboy Reservoir Dam, in Baltimore County.  This was a hike that he and I had taken together at least twice in the past, but not for several decades, and we found it remarkable how little this scenic stream valley had changed in all that time.  On the return trip, somewhere between Falls Road and Masemore, we stopped to enjoy a small flock of migrant warblers (almost entirely males; they generally 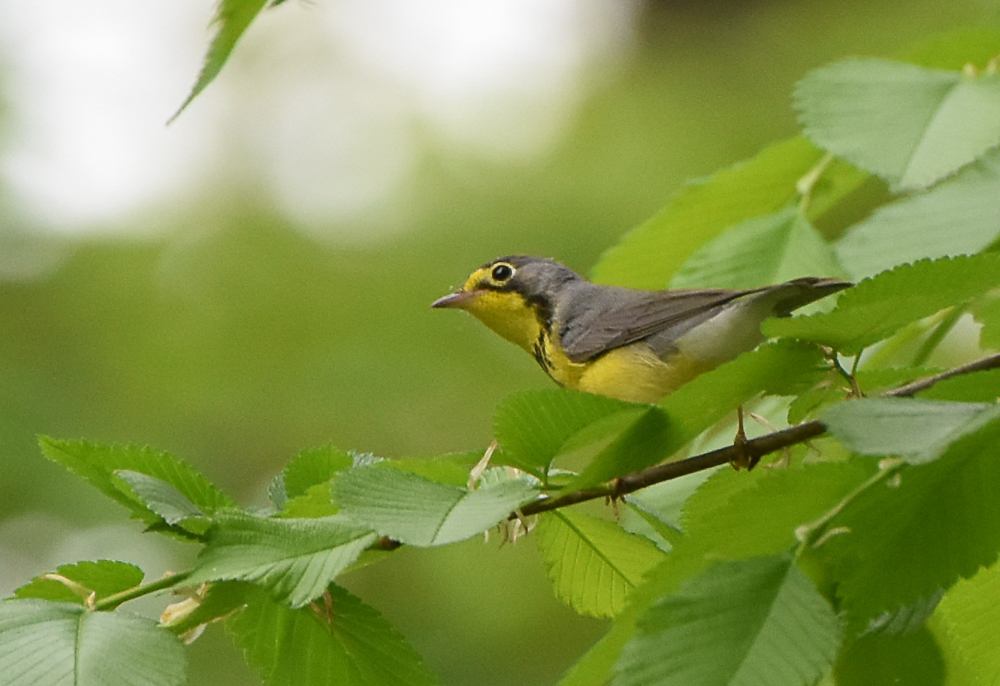 return earlier in May) on the far shore.  There were five species in all, covering just about the entire color spectrum–from the finely streaked plumage of a Black-and-White Warbler to the midnight-blue (a rare hue in the bird world) of the Black-throated Blue Warbler to the lime green cap and rufous flanks of a Chestnut-sided Warbler.  The real stunner was a male Canada Warbler–equal parts slate-colored back and brilliant golden breast, with a perfect little eyering, and a prominent black ‘chain’ around its neck.  This gorgeous little guy only passes through the Baltimore area for a brief week or two every spring and fall on its journeys between its summer home in the forests of northern New England and the eastern Canadian provinces and its wintering grounds in Venezuela, Colombia, Ecuador, and Peru.  If you’re lucky, you may find a pair breeding in boggy portions of the highlands of Garrett County (Cranesville Swamp is a nice bet), but, for the most part, Maryland is just a rest stop for this tiny traveler. 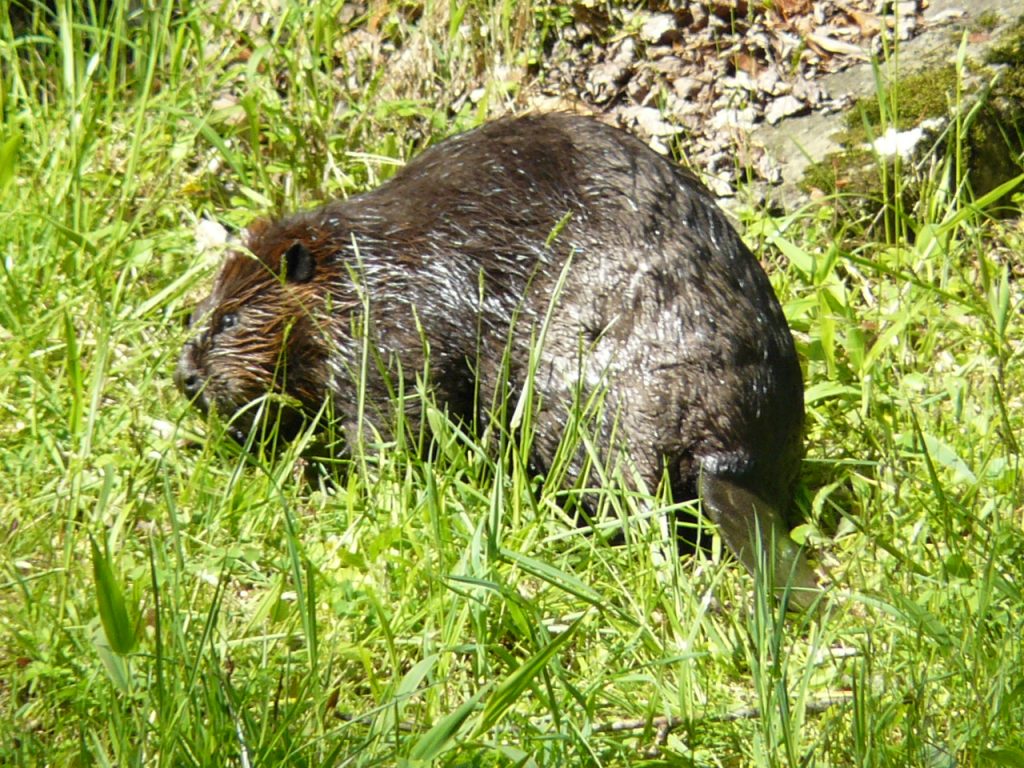 After a long stretch (it’s easy to lose track of time when a wave of spring warblers flits all around you) of appreciating how cooperatively these colorful passerines posed for us, we turned to continue downstream.  At that very moment, an enormous rodent lumbered (pun intended) out of the Gunpowder and pulled itself up onto the bank directly across from us.  Not only did it startle both of us, but we literally gasped at its size.  This was no muskrat or even otter; it was a massive, full-grown beaver that easily weighed about 50 pounds.  Both of us knew that Castor canadensis dwelled along the Gunpowder; in fact, we had each, independently, seen them before not far from here.  But never had I encountered one at such close range, and neither of us had ever come across a behemoth like this one.

Expecting this primarily nocturnal and typically shy mammal to slip into the woods or back into the stream upon noticing us, we were surprised at how oblivious the beaver was to our presence.  It found a sunny spot, roughly 25 feet from us and plopped itself down–literally sitting on its own tail–in the grass.  For the next ten minutes we were entranced watching North America’s largest rodent (and one of the largest in the world) dry off after its swim, scratch, and groom its own fur, frequently reaching for its oil glands on the underside of its belly.  It clearly had an agenda (beavers are supposed to be busy after all) and was NOT going to let a couple of middle-aged hikers alter its routine!  Meanwhile, we barely flinched, whispering exclamations to each other about the varmint’s duck-like webbed feet, enormous hind claws (specially adapted to apply that waterproofing oil), huge flattened tail (used, like a rudder, for steering through the water, slapping the water to communicate with family members, storing fat for the winter, and temperature regulation), and teeth that certainly lived up to their ‘buck-toothed beaver’ moniker. 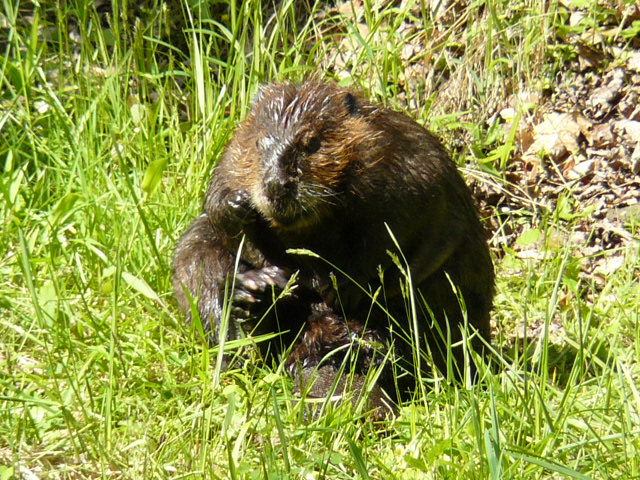 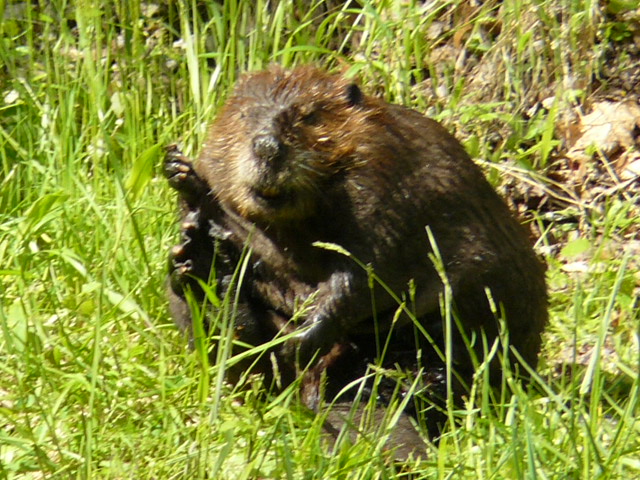 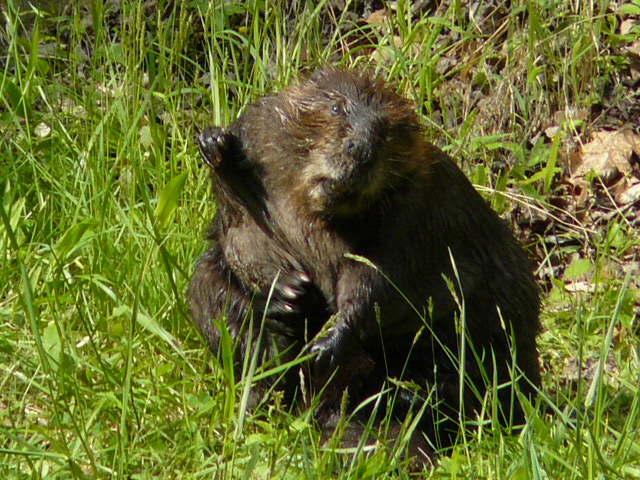 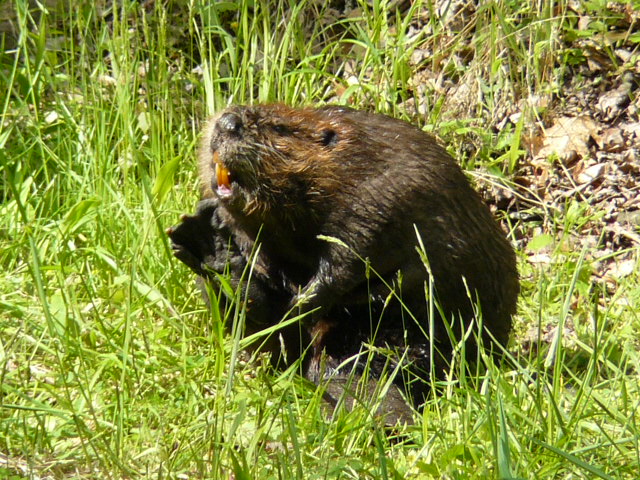 By the time Castor had finished primping, it was now late afternoon, the winds were picking up, and the sun disappeared behind some increasingly ominous-looking cloud cover.  Surely now it would move on to other business!  Wrong again.  The critter, finally pleased that its lush coat of fur was squeaky clean and fully presentable, turned slightly, faced us head-on, and . . . sat there.  And sat.  And sat some more.  It was literally as wide as tall and, like an enormous bowling ball, would’ve done a perfect forward roll into the water had someone just nudged it from behind.  In fact, it reminded me very much of an overstuffed teddy bear. 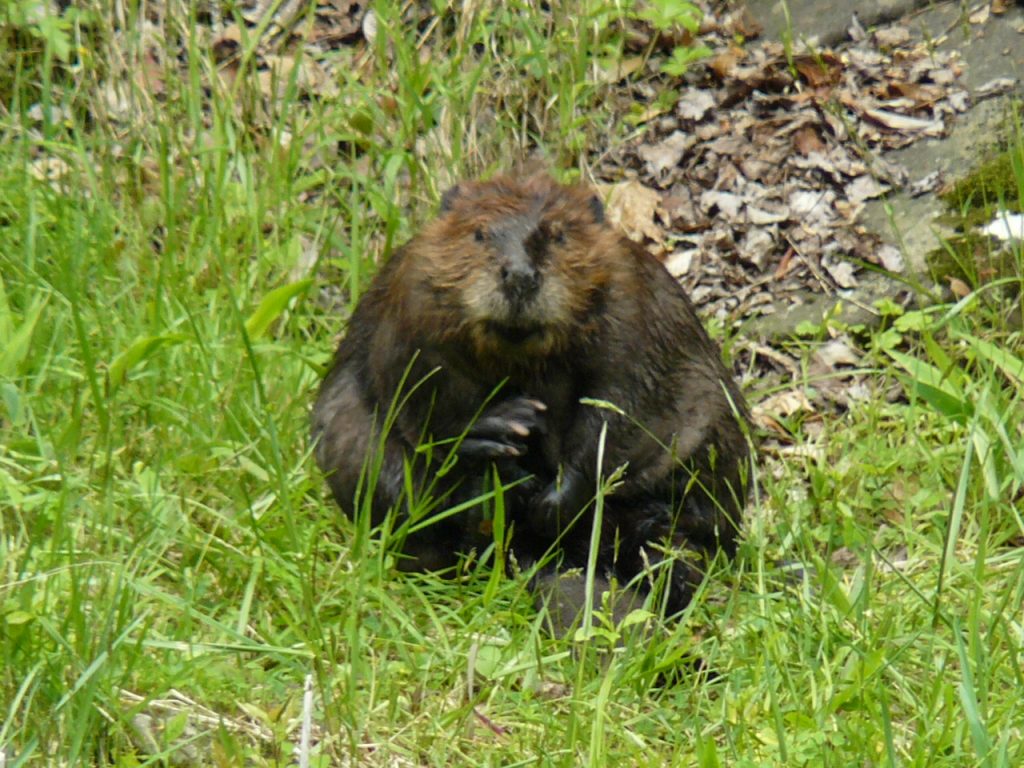 In the end, Mr./Ms. Beaver had more patience than we.  We were cold and a wee bit nervous about possibly getting rained upon, and headed back to our car, vastly enriched by this unexpected (as all good wildlife encounters should be) half-hour meeting with Castor canadensis. I’ve been thinking about that experience a great deal over the past six days, so much so that I’ve been surprised how much it impacted me.  Wondering why it made a bigger impression than most ‘cool wildlife sightings,’ I’ve been doing a little reading that has helped clarify a few things.  You see . . . 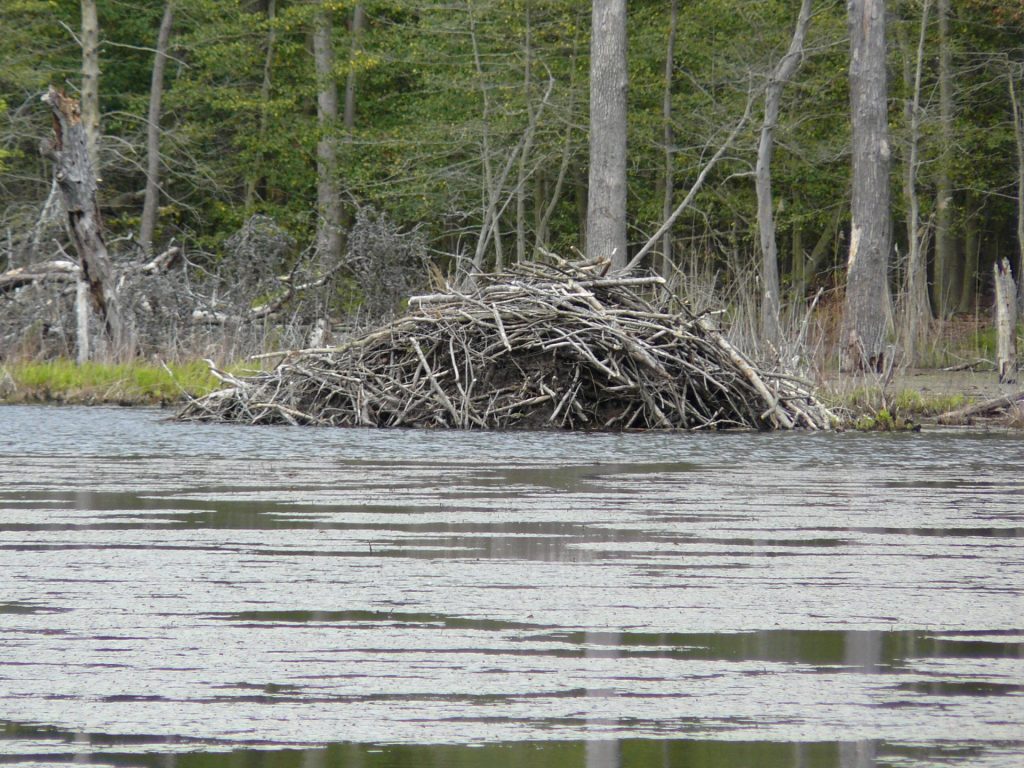 If, like Ward and June Cleaver, you’re worried about the beaver, get more great info. here; for a more scholarly summary, try this.