This winter we experienced a record setting blizzard, with over 30 inches of snow covering our property and roadways!

During hazardous winter weather like this, it can sometimes be a challenge to make sure our many education and exhibit animals are safe and well cared for–especially for those animals that reside outdoors year round.

In many cases, our animals are given extra food, water, and bedding in advance to make sure they are ready for the storm, just in case travel or entrance to the nature center is delayed. There are also several staff that live nearby and are trained to assist with basic animal care in the event that the main animal care staff cannot make the commute.

During this year’s “snowmageddon”, travel was nearly impossible and highly unsafe during the main part of the storm. With record snowfall and high wind, we were unable to get to the nature center until it had passed.

Thankfully, we were still able to check in with our feathered friends out in the aviary with the help of some great technology–web cameras! 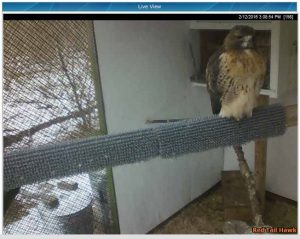 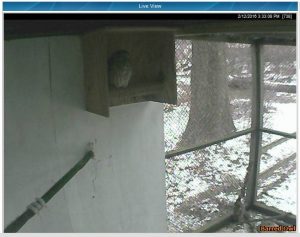 Our aviary houses four different native birds of prey; a red-tailed hawk, eastern screech owl, redshouldered hawk, and a barred owl. Before the storm, Irvine staff had considered bringing the birds indoors and housing them in their temporary crates–this has been done a few times before, generally when the temperatures drop into the negatives. But the birds become more stressed when moved into these unfamiliar smaller spaces, and they are naturally adapted to survive winter in Maryland, so it was decided that they would remain outdoors.

With the help of two webcams mounted in the barred owl and red-tailed hawk mews, animal care staff were able to watch the birds and keep an eye on their behavior to make sure they were safely weathering the storm. 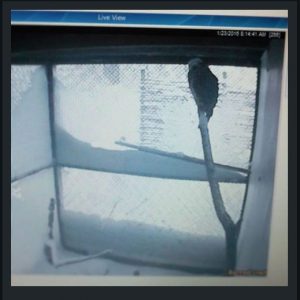 Despite the cold wind and continuously accumulating snow, our raptors were seen moving around in their exhibits, feeding and perching–seemingly perfectly content! In fact, our barred owl was observed sitting out with a small amount of snow collecting on her head, as if she was enjoying the winter weather.

These webcams allowed Irvine staff to rest easy knowing that our animals were doing just fine until the storm passed and we were able to get back to their care.

You can watch our raptor cam too! Follow the link below to view our red-tailed hawk: