Ah, these early weeks of summer!  Humid days, cool evenings, lots of rain, and critters out in force . . . what’s not to love about nature at its busiest time of year?

CHUBBY CHEEKS — I led a guided bird hike last week with a lovely family of three, including an energetic and curious 7 year-old.  At the beginning of our walk, she and I filled up the birdfeeders at the Woodland Wildlife Blind; we agreed to give the birds an hour or so to discover the seeds (we don’t normally fill the feeders this time of year, as bugs are plentiful and it’s healthier for the avian life to be self-sufficient when the climate allows), then go back and watch quietly to see what comes in.  While she clearly enjoyed our hike, and we got great looks at some beautiful songbirds–bluebirds, a male Orchard Oriole, territorial Red-winged Blackbirds, a Red-shouldered Hawk–several times she mentioned how she couldn’t stop wondering what birds were eating ‘her’ seeds, and she was very excited to return to the blind and find out.  Well, birds don’t forget a potential food source for long, and our last-minute feeder refill was successful in bringing in White-breasted Nuthatches, a Carolina Chickadee, several Northern Cardinals, and a Red-bellied Woodpecker, all of which thrilled our budding young naturalist.  Of course, no bird-feeding setup ends up feeding just birds.  We had a special moment, when a doe and her young fawn cautiously skirted their way around the feeding station and blind–checking us out carefully all the while.  However, nothing amused the girl more than the antics of Irvine’s abundance of Eastern Chipmunks! 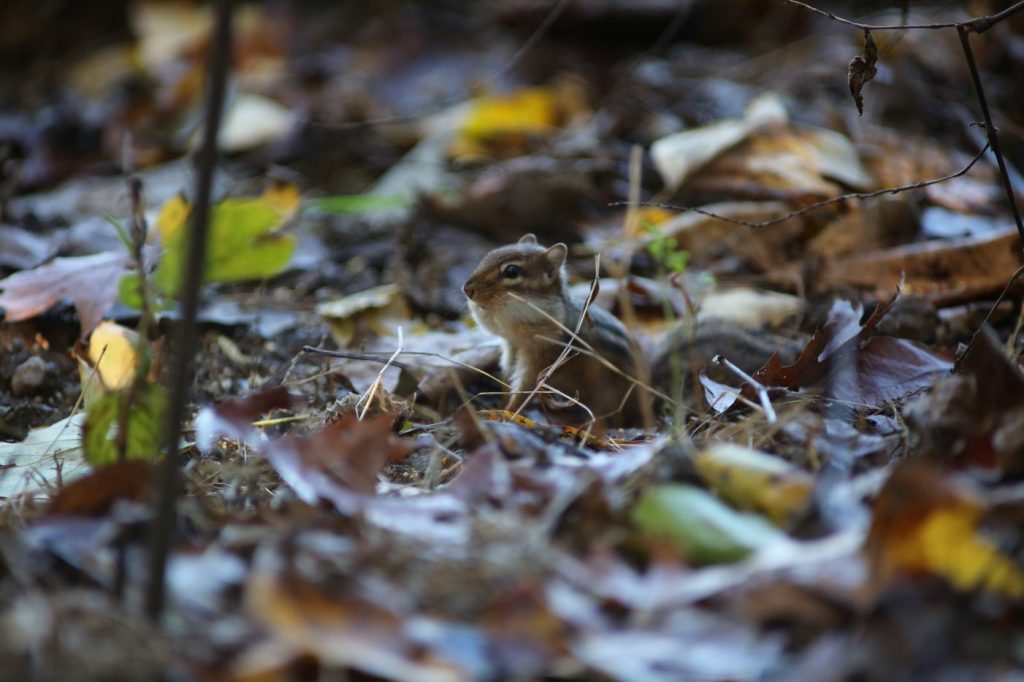 Visit here in the winter, when they are nestled in their extensive underground burrows, hibernating and, from time to time, eating their hard-earned cache, and you’d never know that chipmunks even lived here.  However, this time of year–especially in 2020, they’re everywhere (possibly a consequence of our mild winter?), out-chirping the birds at times and keeping understory vegetation in constant motion.  With one exception (a single species native to Siberia), Chipmunks are a truly North American phenomenon, with over 20 species, most of them native to areas from the Rocky Mountains westward.  While Chipmunks can do just as much damage to homes and gardens, most people don’t find them nearly as annoying as their larger cousin, the Gray Squirrel.  Although pint-sized, they pack impressive self-confidence, a complicated communication system, and loads of personality–and they’re cute as heck!  They run with tails straight up, flashing their reddish rump and racing stripes, and always seem to have those cheek pouches stuffed like a balloon that’s about to burst.  How fun would it be, just once, to push on those bulging cheeks and witness the slot-machine fortune of seeds come spilling out?  It was great entertainment watching as many as 7 or 8 little chippies compete to hoard as many seeds as possible from under the feeders–and just as amusing watching our young naturalist’s reactions to their clever stunts.  Both of us, in fact, were amazed at how adeptly several of the chipmunks opened the hinged roofs of two of the feeders and climbed right inside to gain greater access to cheekfuls of snacks!  Chatty, cheeky, and charming . . . regardless of any headaches they cause, it’s impossible to stay angry at chipmunks. 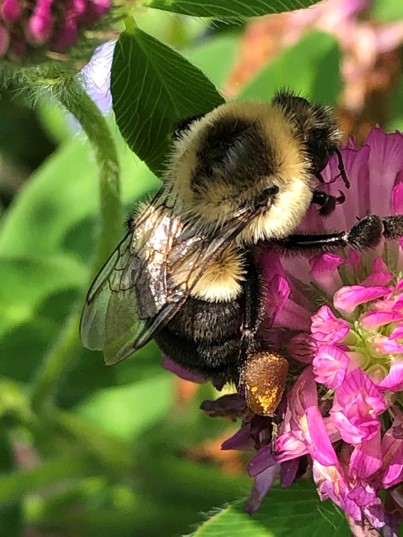 HARD TO BEELIEVE —  The curator of our woodland garden, Master Gardener Clare Walker, delivered a fascinating Zoom presentation on Bumblebees the other night.  It was part of a week-long DNR series in honor of National Pollinator Week.  Clare knows an enormous amount about almost anything nature-related, but her two greatest passions are wildflowers and native bees.  As someone who spends a great deal of time outdoors, yet, unfortunately, suffers from a bee allergy, I don’t get up close and personal with insect pollinators all that often, so I learned a tremendous amount from Clare’s talk.  In addition to their remarkable intelligence (bees can learn feeding behaviors from one another, can judge relative distances and remember routes of several miles in length, and can learn to use tools in order to get rewards), what surprised me the most was the degree to which bumblebees and honeybees can ‘regulate’ their own temperature.  Like all invertebrates, bees are cold-blooded.  Yet, they need warm temperatures (ideally around 86o F or above) in order to fly.  However, most bumblebee and honeybee species are able to be actively foraging at temperatures 20 or even 30 degrees cooler than this and, in fact, they must, in order to take advantage of early spring nectar and pollen.  The trick is shivering–yes, just like we humans do in cold weather.  Bees can decouple their wings so that they remain still, yet continue to vibrate the large thorax muscles at the base of the wings so rapidly that they generate a great deal of heat–much like idling a car engine before driving on a very cold morning.  This idling still makes the familiar buzzing sound, even though the insect’s wings are not moving.  The revving up process can take seconds or as long as fifteen minutes based on the ambient temperature and how long a bee has been still, and it can raise the temperature of a bee’s thorax by tens of degrees!  Hence, some biologists refer to bees as technically a cold-blooded organism, but one with thermoregulatory capabilities. 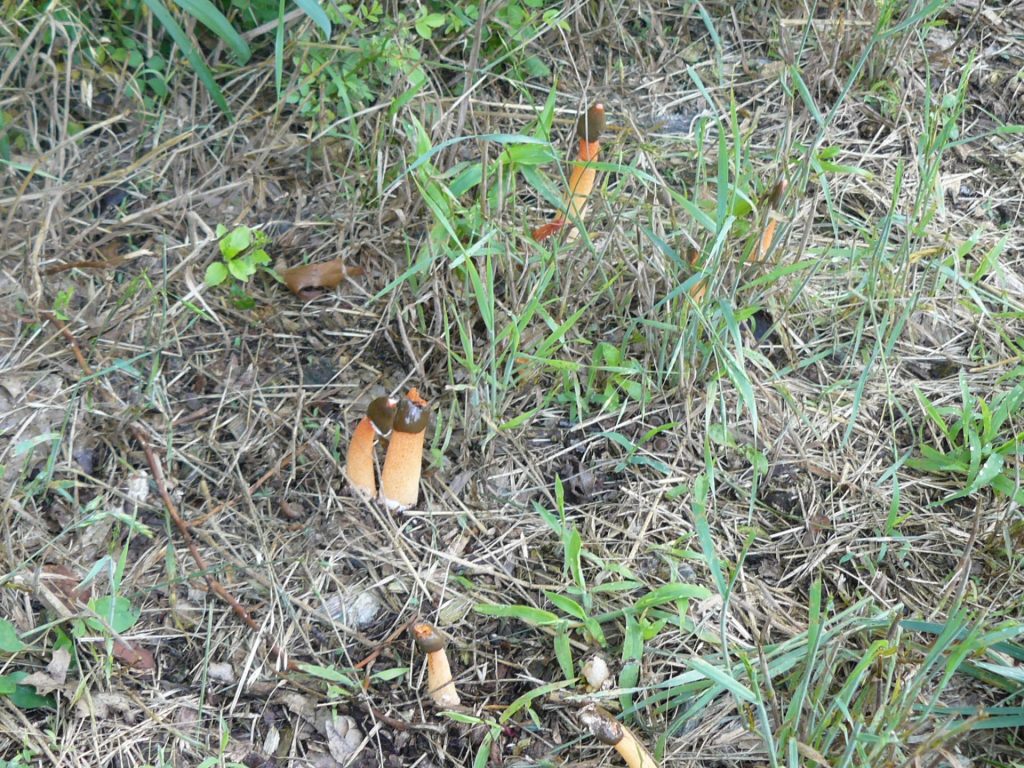 ONE FUNKY FUNGUS — Due to the frequent downpours of the past week or two, several of our trails are quite soggy at the moment, particularly along the low-lying northern edge of the property and parts of the Back Meadow.  In some of the shadier spots, there’s currently quite a variety of very cool-looking fungi growing, several of which I don’t see often.  Yesterday morning I was walking a stretch of Cold Bottom Trail and was taken aback when I almost stepped on what at first glance appeared to be a small bunch of carrots.  Upon closer look, there were roughly a dozen short orange stalks scattered about the trail and many of them looked as if they’d been dipped in chocolate–or, perhaps, in something much less pleasant.  While I know I’ve seen fungi like this before, growing on damp piles of mulch, I’ve never really taken a close look until yesterday.  Fortunately, I was able to pause to take a few pictures, thanks to being fairly congested by late-spring allergies and the fact that these curious growths were early enough in their quick lifecycle that they hadn’t reached full pungency. 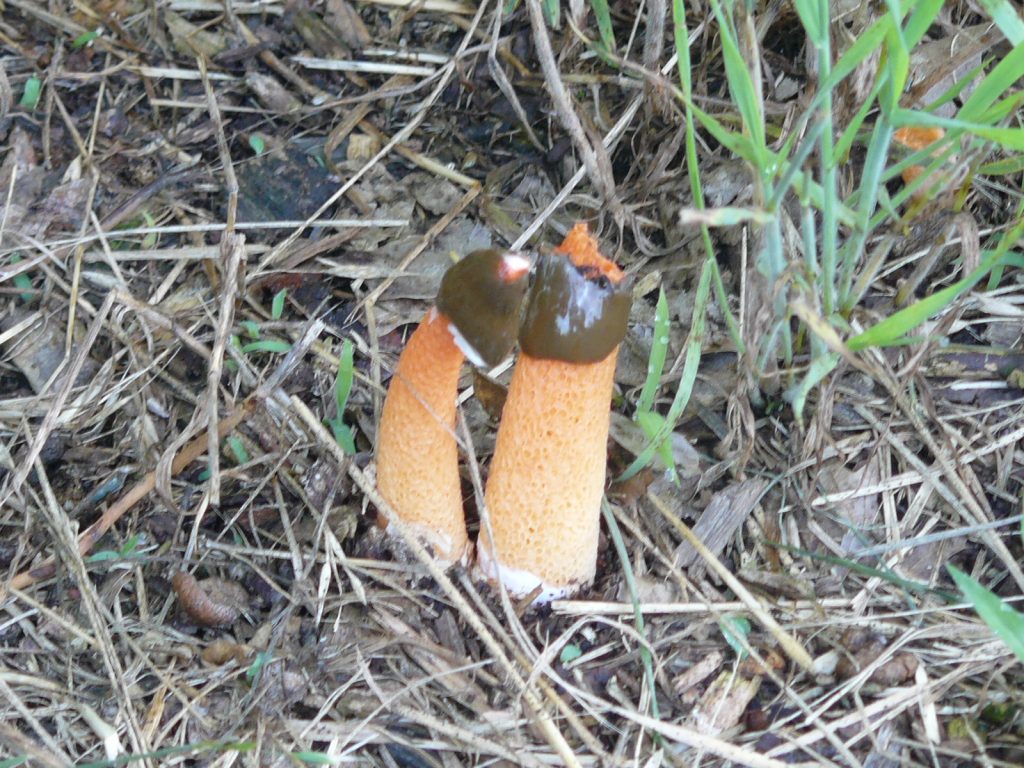 Turns out I was standing near a small patch of stinkhorns—a delightful name, I know, but superbly apt.  Stinkhorns are a family of rapidly-growing stalk-like fungi that are known for their awful-smelling spore masses which tend to ooze out of the stalk in sticky globs of brown goo. (How’s that for an appetizing image?)  Not only does the goo resemble dung in appearance, but it also reeks like feces, or perhaps rotting carrion, which, by design, attracts flies that help disperse those spores.  As if that isn’t bizarre enough, the entire stalk grows almost visibly fast–in a matter of just a few hours, then within two-three days it’s dried up and gone.  Apparently the stench isn’t as bad when the stalk is fresh (as were the ones I found), but it can be truly horrendous a day later.  As disgusting as all of this is (the stinkhorn has been called ‘the grossest thing on Earth!’), stinkhorns are harmless and actually edible, although they, like many mushrooms, have very little taste.  From a gardening or forest perspective, in fact, they’re desirable, as they help break down fallen, decaying wood into nutrients that plants can use.  There are about two dozen species of stinkhorns and several of them look remarkably similar.  My initial stab at an ID was Devil’s Dipstick, also known as the Elegant Stinkhorn (how’s that for an oxymoron?!?)  Unsure about the call, however, I posted these photos on iNaturalist last night and within hours received word that I, too, had apparently made a common misidentification and that these specimens were likely of the species Phallus rugulosus, commonly known as the Wrinkly Stinkhorn.  So, even though I learned a ton from this disgusting little encounter, I got the species ID wrong.  Well, that stinks. 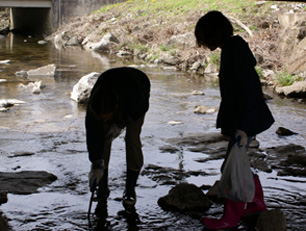 TRASH TALKING — I’m a bit of a curmudgeon when it comes to children and their use of cell phones these days.  I worry that the phone obsession is impeding kids from spending time outdoors, exploring and getting acquainted with the natural world.  In my mind, there’s no doubt that rapid-fire texting, with its abbreviations and acceptable slang, is deteriorating writing skills.  And, more than ever, young people are communicating with anyone and everyone electronically, yet struggling with face-to-face interpersonal skills.  In general, I’m skeptical of most new technology and how ‘useful’ it will be, and I need to be convinced before jumping on every tech band wagon that comes along.  That said, I’m pretty excited about a relatively new (it’s been around since 2015 but has really caught on over the past year or two) app that was recently recommended to me by our Manager of Public Programs, Diana Roman.  Litterati is an incredibly simple concept: find a piece of discarded trash along the roadside, pick it up and photograph it before disposing or recycling, as appropriate, then upload that photo.  The app stores the geographical location (gps coordinates) and time, and suggests an identification for what exactly the litter was, which you quickly confirm or edit.  The result is an enormous worldwide database, which can be mapped and sorted in myriad ways–by country, city, street, date, type of trash, collector, etc.–and can also be used to challenge or join with other individuals, groups, or organizations to set and reach clean-up goals and to use friendly competition as motivation.  But the broad-scale crowd sourcing of quantifiable data 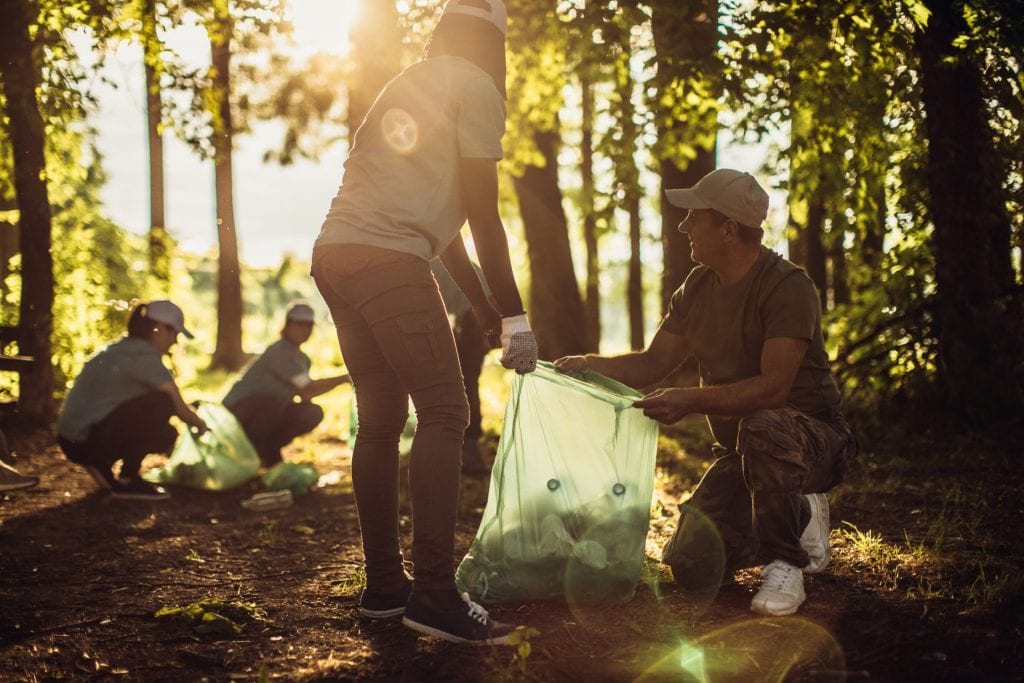 The sheer volume of data (to date, over 160,000 citizens from 165 countries have documented almost 6 million pieces of trash) and the fact that most litter in the modern era is emblazoned with its company of origin provides intriguing leverage for some very meaningful societal changes. Concern, advocacy and conservation can grow from a collection of garbage pictures, if it is shared widely, organized, and analyzed in a convincing manner. A few examples:

Of course, with schools closed, we aren’t yet sure where and when we will get to test the use of Litterati with our first group of young environmentalists.  But, it’s clearly on our agenda for an upcoming trial project (our first to be based on a cell phone app!) once we are able to resume working with school groups.  We’re thinking that this is one kind of trash-talking that all adults would like to hear from the next generation.