COVID-19 fatigue setting in?  Waning daylight bringing you down?  Feel like you’re in a rut?

Well, you’re not alone. The same can be said for the entire population of about 240,000 white-tailed deer that call Maryland home. Halloween week generally marks the beginning of rut season for the most-popular game animal in the Mid-Atlantic, so drivers beware! 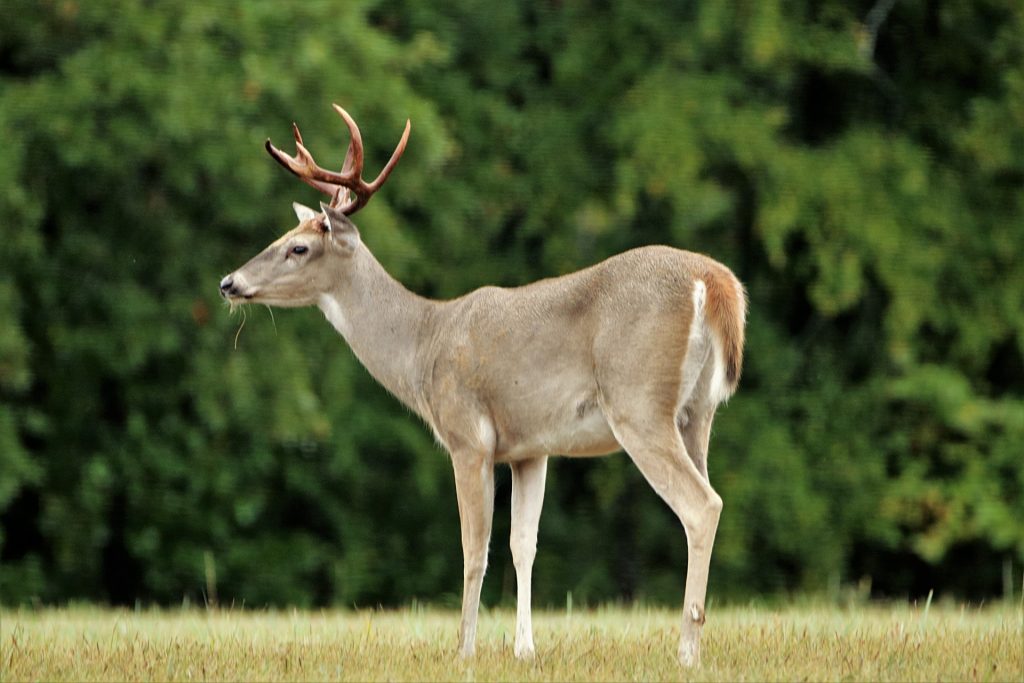 White-tailed deer have an interesting history in the United States.  Quite common when European settlers arrived, the species was hunted almost to extinction by the late 1800’s. It is estimated that there were only approximately 300,000 in the entire United States by 1890, and the population size didn’t change much over the next few decades. However, thanks to the creation of state wildlife agencies, the initiation of strict hunting regulations, and various restocking efforts in the middle of the 20th century, white-tailed deer rebounded dramatically throughout the eastern U.S. By the late 1990’s, the U.S. had an estimated 33.5 million white-tails, likely exceeding the pre-colonial population. Numbers have declined slightly since then, but current estimates hold around 28 to 30 million.  True to this trend, Maryland’s deer population peaked in 2002, at roughly 295,000, but it has dropped about 10% in each of the past two decades. 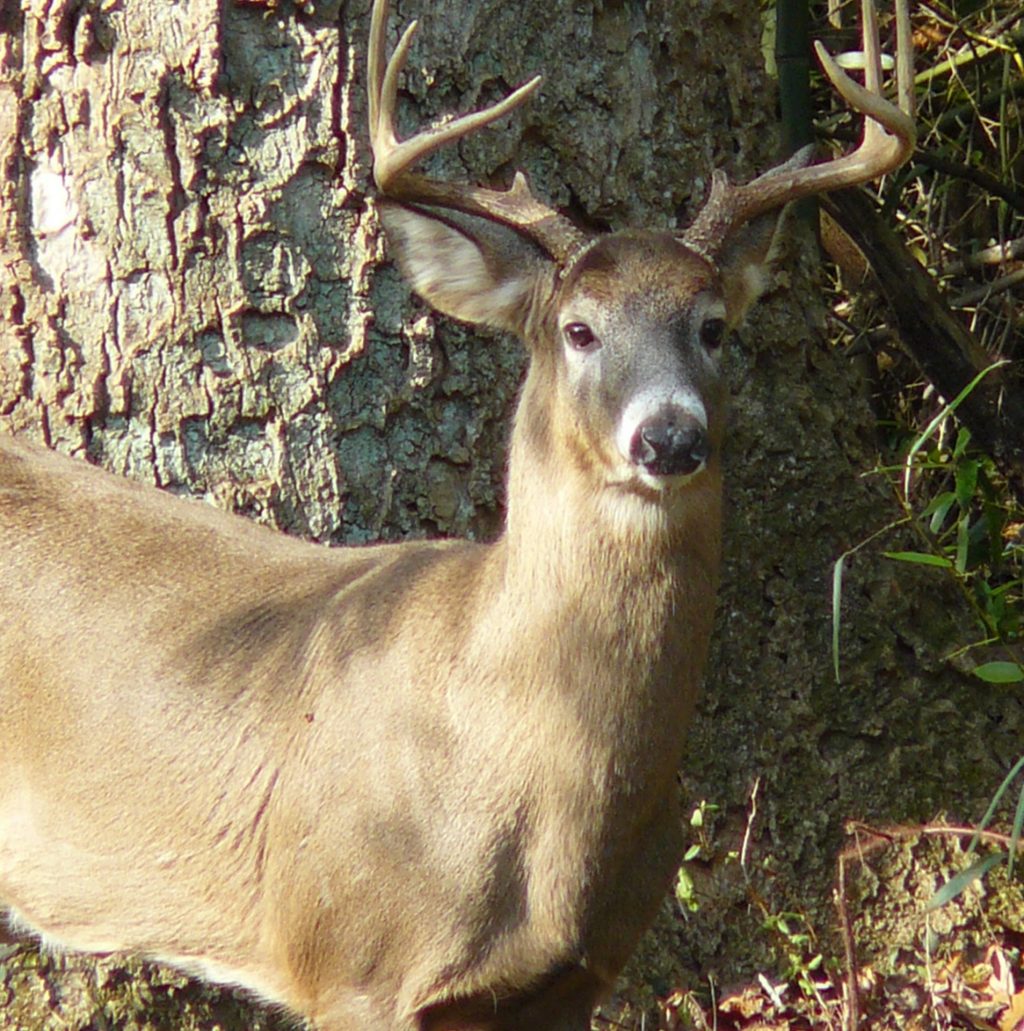 Still, white-tailed deer are as visible today as they’ve ever been, and close encounters between people and the hoofed herbivores of Maryland’s woods are increasingly common. We are well aware of the damage that browsing deer can do to farmers’ crops, forest understory plants, and expensive ornamentals in suburban gardens. (Come see, first-hand, the contrast between the diversity of vegetation growing on the floor of Irvine’s fenced-in Woodland Garden and the near monoculture of spicebush growing outside that fence.)

Over the past 25 years, we’ve become more cognizant of the dangers of Lyme Disease, which, of course, is carried by deer ticks. Between 1992, when there were just 185 documented cases of Lyme among the residents of Maryland, and 2007, the incidence of Lyme diagnoses increased more than ten-fold! Fortunately, as awareness has led to greater caution (bug spray prior to and tick checks afterward are now fairly regular parts of the outdoors routine), the number of cases has been cut in half since that peak. In 2018, a little under 1400 cases were reported in Maryland.

Another negative consequence of today’s larger deer herds is the appearance of Chronic Wasting Disease, a fatal neurological disease that affects ungulates of several species. Neither viral nor bacterial, CWD alters protein structure and causes small holes in the host’s brain, leaving it sponge-like and deteriorating. Although rare in white-tails, the disease is spread via saliva and urine, 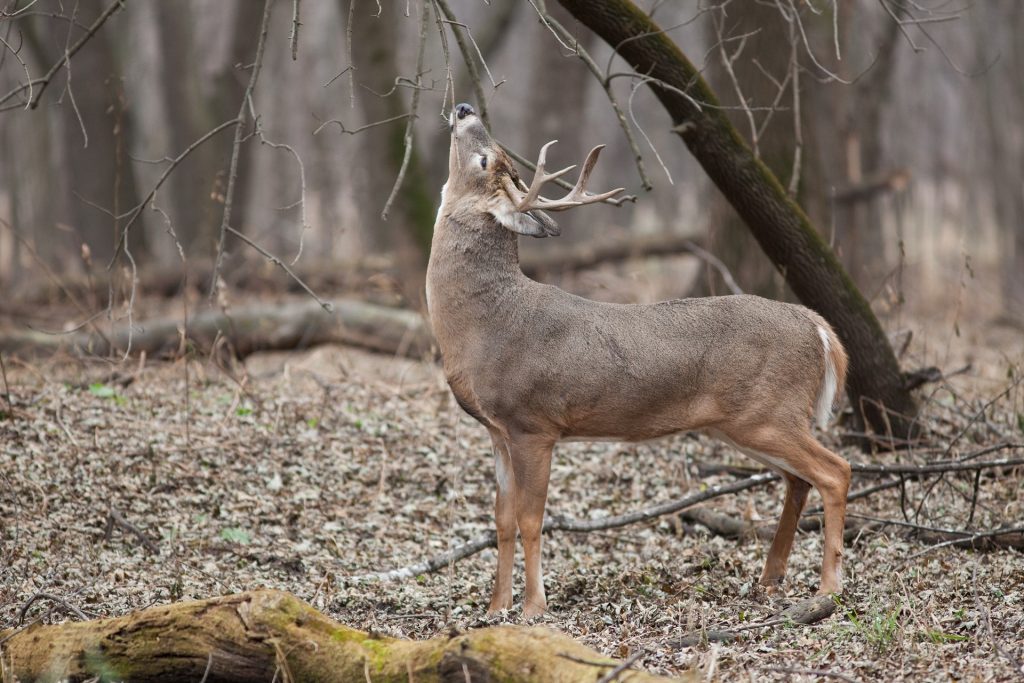 particularly when animals gather in large numbers. It was first detected in Maryland in 2010, but there have now been 80 documented cases since–mostly in the western Maryland counties of Washington and Allegany. As troubling as this number seems, DNR biologists have tested close to 10,000 deer, so the positivity rate remains below 1%.

For all of these reasons–and more–the management strategy for white-tailed deer has shifted over the past few decades from one promoting population growth to one of maintaining numbers where they are. Even though coyotes have made their way into most of Maryland in recent years and Garrett County’s black bear population is stable and healthy, pressure from predators is a very minor player in today’s deer herds, with some fawns being lost each year, but few adults. Hunting, then, is easily the primary cause of deer mortality–through both the archery, firearm, and muzzleloader seasons and via managed hunts on public lands. Collectively, close to 1/3 of Maryland deer are harvested annually–a figure higher than I would have expected. Last winter over 79,000 deer were harvested in the state; Baltimore County ranked third, with 4969 of them. Interestingly, Baltimore was the top county for deer taken during archery season; in fact, hunters in the county downed more deer by arrow than bullet!

However, given the vast suburban sprawl in our Metro area and the fragmented patchwork of development, farmland, and forest throughout the Maryland Piedmont, a significant number of deer suffer another fate that is far more costly and gruesome than hunting. Deer-vehicle collisions have become such a frequent occurrence that they now have their own acronym (DVC) that is used widely by the state police, wildlife officials, and throughout the insurance industry. Incredibly, recent data reveals that an average of 31,500 DVC’s occur each year, just in Maryland, and that they cause over $10 million in damage.  On the national level, there are roughly 1.5 million DVC’s annually, they cause around $1 billion of damages, and take the lives of about 150 people–a number that has doubled in

the last fifteen years. From a probabilistic standpoint, a full 1% of all Marylanders will be involved in a car accident with a deer at some point in their lifetime. That percentage doubles in our neighbor to the north, as Pennsylvania holds the dubious distinction as the state with the most DVC’s (~115,000 per year) in the U.S.; it triples to our southwest, as 3% of West Virginia residents will suffer a deer strike at one time or another–the highest odds in the nation.

While driving defensively is always important in areas where deer are plentiful, one needs to remain especially alert over the next month. Over 50% of all DVC’s occur during the last three months of the calendar year; November is the peak month. Common lore has it that deer are running across 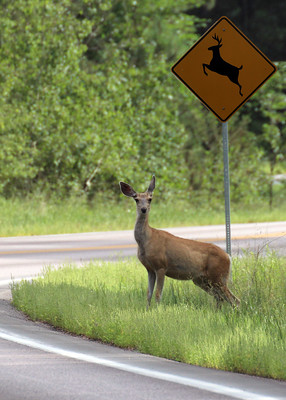 roadways more often in the fall because they are fleeing from hunters. While it is true that the various deer hunting seasons generally run from late September into January, the timing of most DVC’s simply cannot be attributed to hunters prowling the woods and spooking deer into oncoming traffic. The vast majority of accidents involving deer occur within the first few hours after dusk, generally 5:00 to 9:00 pm. There’s also a smaller peak in the hour around sunrise. The cause is purely biological, as late October through early December is the rut (mating season) for white-tailed deer. Particularly during the first half of November, bucks are concerned with just two things, chasing does and confronting other bucks who are interested in those same does. During this time, rutting bucks are more aggressive and less cautious than at any other time of year. Crepuscular to begin with, deer activity picks up dramatically as soon as the sun sets–especially during the fall rut. That is terrible timing for a suburban setting in which many residents work in the city but live 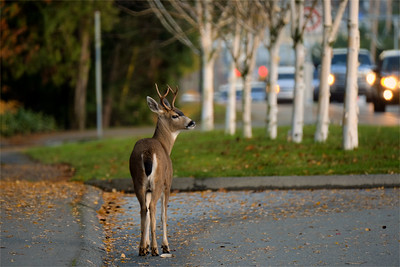 farther out, in deer country. Evening rush-hour coincides with peak deer shenanigans. It doesn’t help that since 2007 we have been ending Daylight Savings Time on the first Sunday in November–just prior to peak rut. Once those clocks ‘fall back’ workers who may be in a routine of driving home at 5:45 or 6:00 pm immediately notice that it’s suddenly dark by that time. This can lead to even more volume on the roads around dusk, as many employees try to head home a little earlier, before it is pitch dark. Needless to say, more cars + more active deer = more DVC’s. (Note that this year we change the clocks on the earliest date possible, so evening commuters will be driving in relative darkness for all of November, the height of DVC season.) 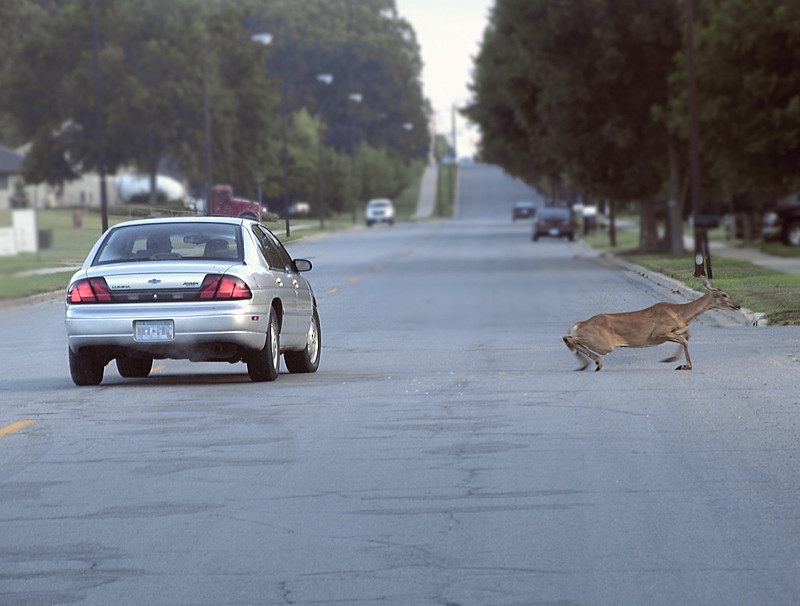 I’ve shared with some of you the minor coincidence that my commute for the past 15 years was exactly 9.6 miles–almost due south, while, now that I’m happily employed at Irvine, my commute is exactly 9.8 miles–almost due west. However, a change in direction can mean a world of difference in the Baltimore suburbs. My new trek, which involves only one traffic light and a couple of stop signs, takes half the time of my former route into the city. The delightful drive all the way across Caves Road puts me in a good mood before I even set foot on the beautiful grounds of Irvine. For the next month or so, however, this spectacular drive will come with a small price; you can bet I’ll be driving more cautiously on return trips home. We are situated in prime deer country, and I have no interest in becoming a statistic. Nor should you. Take it slow; for at least the next few weeks, the deer won’t be.  –BR