My Least Favorite Invasive Species… And Why

In last week’s blog, I focused on the havoc that just a handful of invasive species have wreaked on the native biodiversity of the Mid-Atlantic states, particularly in the Chesapeake Bay region, over recent decades.  Beyond those top headliners, there are dozens of other cases (among the better known are English Ivy, the Japanese Beetle, Kudzu, Virile Crayfish, and Zebra Mussels) of non-native species causing major problems in our local ecosystems.  It’s enough of a biological crisis that employees of eight different agencies within the U.S. Department of Agriculture, along with others from the Department of the Interior and the Department of Commerce, spend the bulk of their careers working to study, manage, control, and prevent the spread of plants and animals that are not native to our continent.  While it is impossible to put a price tag on the related declines or losses of our native species, the direct costs associated with damages caused by, for instance, invasive weeds, rats, snakes, and predatory fish, easily top $100 billion annually.  In almost all of these cases, the introduced species possess evolutionary traits which make them able to outcompete our native species–often at a very aggressive rate.

Still, as one who tends to stop the car to help turtles or toads across the road, always puts out extra bird seed during winter cold snaps, 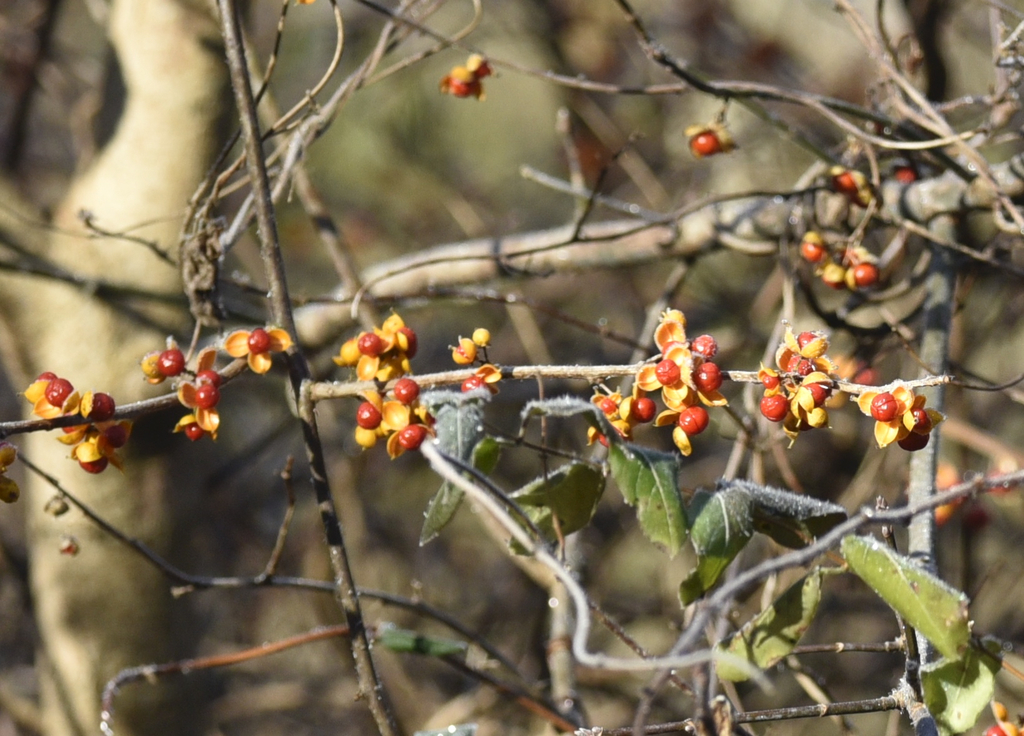 and prefers to throw spiders and stinkbugs out the window instead of smooshing them, I’ve always had a hard time disliking almost any wild organism, native or otherwise.  I’ve never hunted; I personally couldn’t do it, although I do understand that there are a number of valid situations–largely related to population control–in which it is justified.  I rarely fish.  And, with a few exceptions (most notably mosquitos and ticks) I’m pretty much an equal-opportunity appreciator when it comes to most critters and vegetation.  In fact, I actually LIKE a number of invasive plants!  How can one not appreciate the sweet smell of Japanese Honeysuckle, the yellow, orange, and red hues of daylilies that cluster along country roads and bloom all summer, or the hint that winter holidays are not far off when small clusters of Oriental Bittersweet berries replace falling leaves as the main color in the forest canopy? 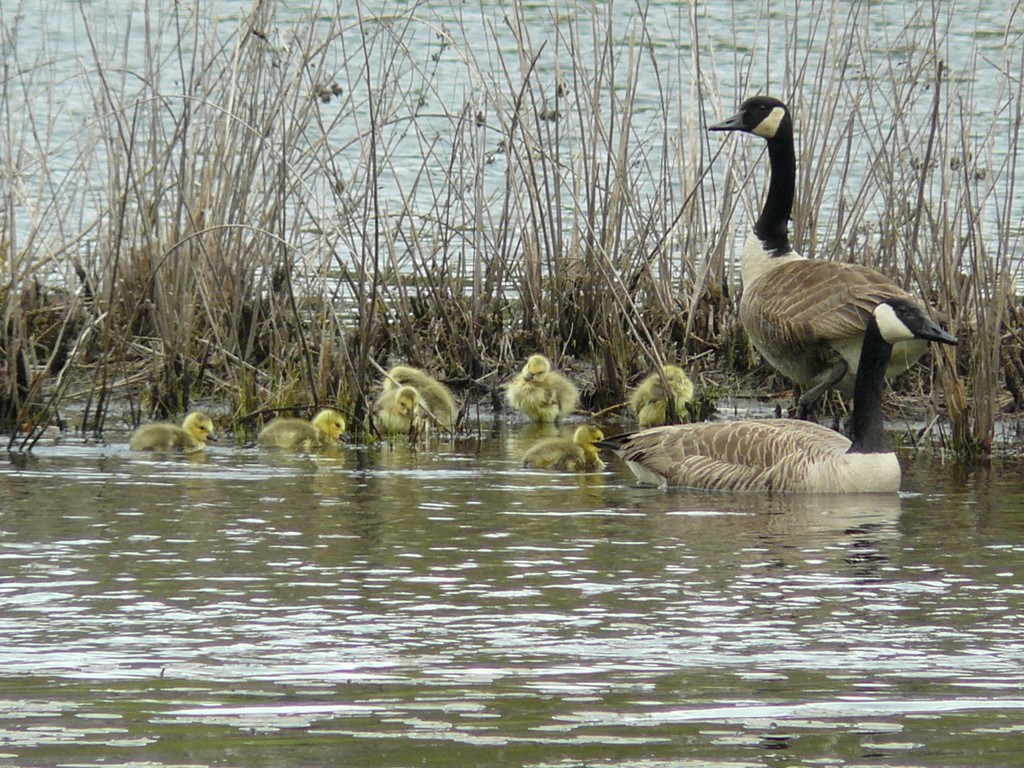 Heck, I even find Canada Geese amusing, even though they’re becoming increasingly obnoxious, losing their fear of humans, and constantly pooping on every golf course and park lawn throughout the eastern U.S.  Few animal species have experienced a population explosion like Canada Geese over the past twenty-five years; their remarkable success, to harken back to an earlier blog, is largely related to their new-found ability to skip migration altogether and adapt to living here year-round.  In fact, while there are still many Canadas that summer in their namesake nation yet winter in the Chesapeake or further south (see the adorable family movie Fly Away Home for more perspective on this), in some areas of the Mid-Atlantic the non-migratory population now rivals that of the ones that journey back and forth.  Most people I know find them a nuisance.  I don’t mind them at all; they can be endlessly entertaining.

I would be lying, however, if I professed to like ALL bird species equally.  As a middle-aged man who has been an avid birder since the age of ten, I’ve spent a significant portion of my life watching birds, listening to them, observing their behavior, and generally getting to know them.  There’s undoubtedly a certain charm or mystique surrounding specialist species, those which have adapted to a very narrow ecological niche.  One has to travel to specific habitats (shady wooded swamps, ridge-top oak forests, stream valley hemlock groves, . . . ) to find them and only at specific times of year.  The fact that one doesn’t encounter them very often is part of what makes them special.  Every birder has a few favorite stories about her/his particular ‘grail bird’–a species which was the target of many an unsuccessful quest and finally made a grand and unforgettable appearance.  A vivid memory like that will outlast thousands of sightings of more mundane species.  The reverse, of course, is true, as well.  If you see a species every dang day, it quickly loses much of its appeal.  If it’s a species which shouldn’t be here in the first place, that’s an extra strike against it.  If you then find out that the species is not only outcompeting some of the locals but that it is directly and violently killing them, that species drops to the very bottom of the list, right next to mosquitos and ticks.

That is precisely what happened to the invasive House Sparrow in my unwritten ranking of the birds of North America, thanks to a recent incident at Irvine.  More on that in a moment.  Originally a Eurasian species 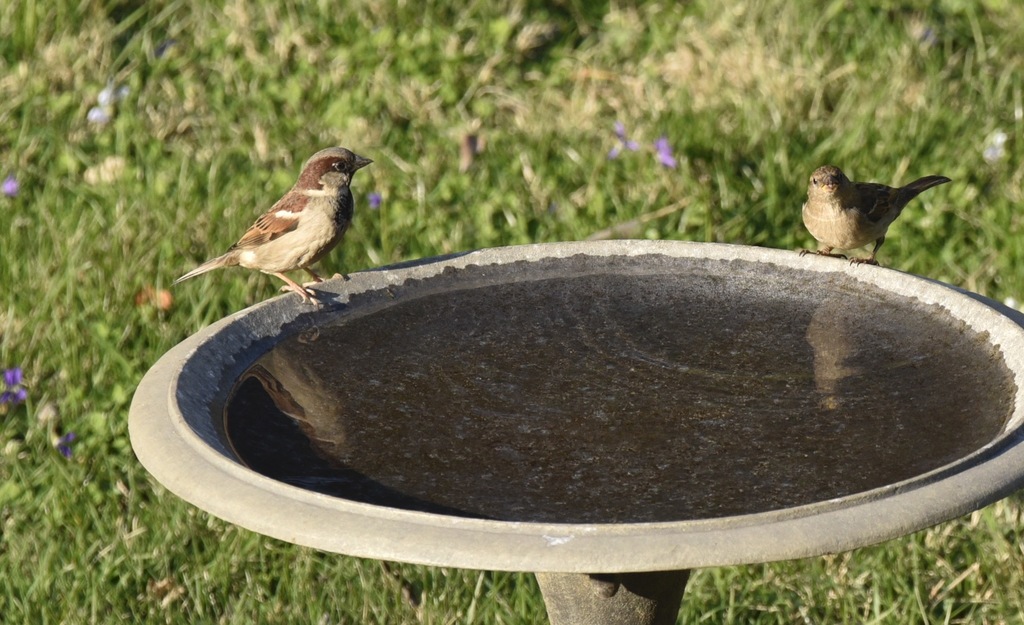 , the House Sparrow was introduced to the U.S. in the 1850’s, brought here intentionally to help with caterpillar control.  It took the adaptable little boogers only 50 years to spread throughout the continent.  The situation was similar in several other parts of the world.  As a result of these introductions, House Sparrows are now resident on every continent, save Antarctica, and are one of the world’s most numerous bird species, thanks to their bold and aggressive personality, omnivorous palate, and complete lack of fear of creatures many times their size.  They frequent the most urban of the world’s neighborhoods, often picking up crumbs underneath al fresco diners; their preferred nesting site is usually on a manmade structure (as their name implies.)  All of this is a recipe for incredible population growth.  Within a century of the first handful being brought to the United States, the number of House Sparrows had climbed to well over 100 million and perhaps several times that.  Today, the world population is likely close to 1.5 Billion! 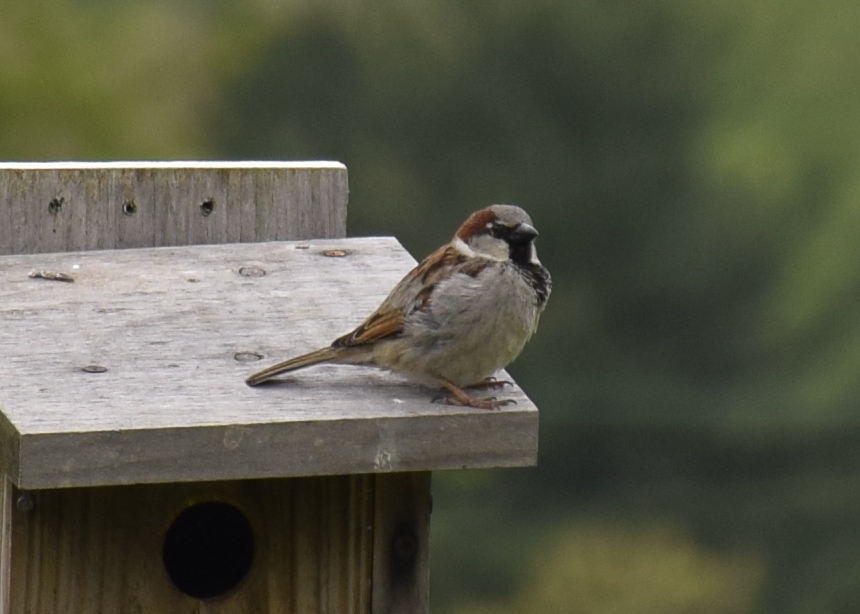 To see just how abundant they’ve been in my own decades of birding, I looked through a bunch of my personal records recently.  An avid ‘citizen scientist,’ I have participated in roughly 150 ‘official’ bird counts over the years.  These are generally all-day affairs (or at least all-morning) and range from Audubon Society Christmas Bird Counts to Breeding Bird Surveys for the U.S. Fish & Wildlife Service to May Counts and Mid-Winter Counts for the Maryland Ornithological Society.  In all, there have been only FOUR of these censuses on which I did not encounter any House Sparrows.  In all, I have tallied over 8000 individuals of the species–just on these organization-sanctioned counts.  That does not include any solo or family bird walks, which is how I usually go birding.  In essence, encountering a House Sparrow as a birder is about as rare as a gardener finding a dandelion (another non-native species) in a vacant lot.  It’s a given.  What’s remarkable to me–I just discovered this and it speaks volumes about my level of affection for House Sparrows–is that although I see them all the time, they are one of the few species that I have NEVER photographed!  My eBird account currently holds almost 1900 photographs of several hundred birds species; zero of House Sparrows.  I just checked, and the same is true of European Starlings and Rock Pigeons–not a single photo!  Interestingly, these are the only three species of birds in our country that are NOT federally protected.  They are our most numerous and yet, if I’m any indication of a norm, perhaps the most ignored.

until now) I had deemed them unworthy of inclusion in my ‘photo bird’ repertoire, as if they didn’t even exist or they’re not ‘real’ birds.  Of the three, however, the House Sparrow receives the brunt of my disdain, especially after what happened a few weeks ago.  As you are likely aware, Irvine 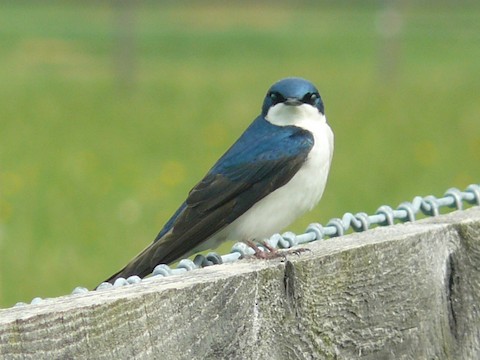 has installed A LOT of Bluebird houses over the years.  Over 70 now dot most of the open land on our 211 acres.  The majority do get used each nesting season, although most by other species; Bluebirds actually only nest in 10-20% of them.  Tree Swallows are the most numerous residents of our nest boxes, followed by House Wrens, then Bluebirds, and a few each year are occupied by Carolina Chickadees.  Invariably one or two boxes, primarily those near the Nature Center–where the habitat is the most developed

–get usurped by House Sparrows.  Unfortunately, both in 2019 and again this spring, the couple of House Sparrows that live along Irvine’s driveway have chosen, of all boxes, the one that Irvine equipped with a ‘nest cam’ several years back.  Set up as a way to film the egg-to-nestling-to-fledgling process, the nest cam had great potential as an educational tool.  Since the sparrows took over last year, however, we haven’t shown any of the footage publicly.  Thank goodness we aren’t live-streaming it, as some Nature Centers do!  You see . . . 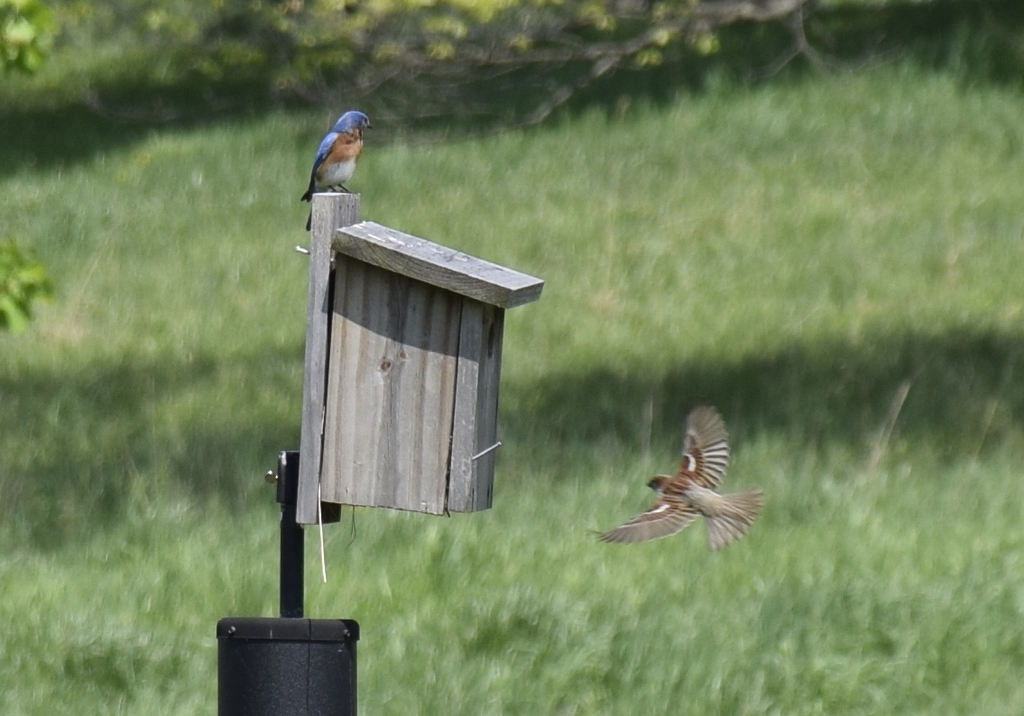 Two weeks ago, I received a very alarming email from our IT Coordinator, Jack Fromm.  Jack had just taken a glimpse at the nest cam footage and was surprised to see not a nest, but several dead birds in the bottom of the box.  He backtracked a bit and could not believe what he saw.  A Tree Swallow had gone in to check out the potential digs and, moments later, was ambushed by the male House Sparrow.  The Sparrow pounced on the Swallow and, despite being only slightly larger than it, held it down on the floor of the box, pecking its head all the while.  There was a great deal of struggle, but, like a major decision in a wrestling match, the Sparrow remained in control the whole time and eventually caused enough head trauma to kill the Swallow.  Incredibly, a bit later, the Swallow’s mate curiously entered the box and suffered the same brutal fate.  I was appalled to hear Jack’s news and found it hard to believe.  I was aware that House Sparrows were often referred to as nestbox bullies and that they frequently chase other birds away from a box that they want.  They’ve been known to chuck other species’ eggs out of a box and build their nest right over top.  However, this was my first experience with a Sparrow actually killing a competing songbird–and Jack had the video to prove it.  A few days later I was on site at Irvine and went to examine the scene of the crime; sure enough, there were two deceased Swallows in that box, and both had bloodied heads from the Sparrow’s repeated strikes.  Perhaps even more incredible was that there was absolutely no sign of a Sparrow nest; the pair was actually occupying a box two poles down.  This was a turf war like none I’d ever witnessed in the avian world–and over a nest site that wasn’t even used!  I suppose from a purely evolutionary standpoint, one has to admire the ‘survive at all costs’ toughness of this invasive species.  But my respect ends right there.  If I ever do cave and stop to photograph a House Sparrow, it’ll be a mugshot for a ‘Wanted’ poster.

House Sparrow Photographs by Laura Bankey of The National Aquarium

(since I have none)