As an avid birder, I’ve come across many over the years who share my interest but also extend their fascination with colorful flying critters to butterflies, as well. Particularly if one dabbles in photography, there’s a natural progression from snapping pictures of brightly-hued feathered wings to brightly-hued scaly ones. In fact, the sequence often goes in reverse, as birds, on the whole, are the more difficult to document in photos, as they often stay hidden and at great heights. Butterflies, on the other hand, are generally out in the open, at or below eye level, and almost begging to have their picture taken. I don’t quite know why–in fact, I’m almost ashamed about it–but while I rarely pass by a butterfly photo op when it presents itself, I’ve never gone out with my camera, specifically in search of them. In fact, I know surprisingly little about the order of Lepidoptera, our scaly-winged insects who spend a significant portion of their lives as caterpillars. It’s a bit like the fact that my family has had a piano in our house for years, but we only noodle around on it; none of us really play . . . kinda’ sad to have the opportunity, but not take advantage. 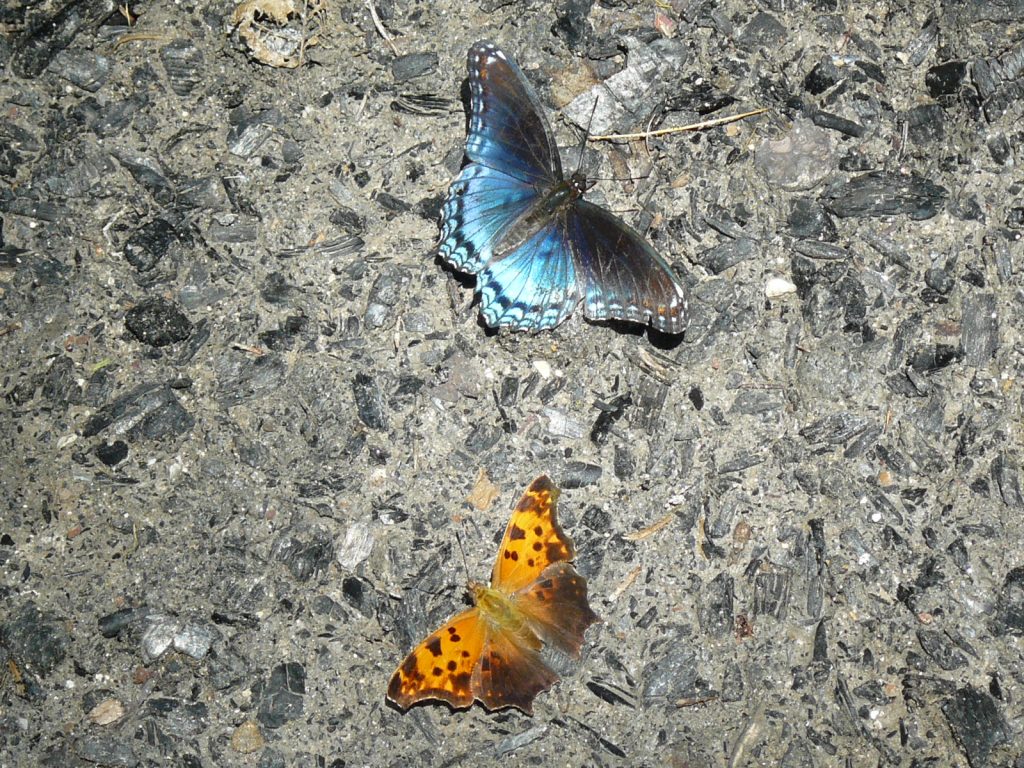 With this being my first summer at Irvine, I’m really enjoying the variety of spectacular butterflies that regularly pose for me. Of course, the best opportunities always seem to crop up when I do NOT have my camera, but this time of year one can observe a dozen species or more in our meadows without even trying. My most recent encounters include the Great Spangled Fritillary, Red Admiral, and Eastern Tiger Swallowtail below:

As you may know, Irvine does have a small Butterfly House (one of our many ‘hidden gems’), just to the west of the main entrance to the Nature Center. In a typical summer, it is lovingly tended by our Animal Care Manager, Jenna Krebs. Certainly it has received less attention during this unprecedented COVID spring/summer, but the slower pace has allowed me some time to take advantage of this chance for a long-overdue education about butterflies and moths. (A quick thanks to my naturalist colleagues, Jenna, Diana Roman, and Clare Walker, for sharing their ‘Lepidopteracuity.’) I must admit that it’s been fascinating, and I was particularly thrilled to be able to put my new knowledge to use when I made a cool roadside discovery just last weekend!  (More on that in a moment . . . ) 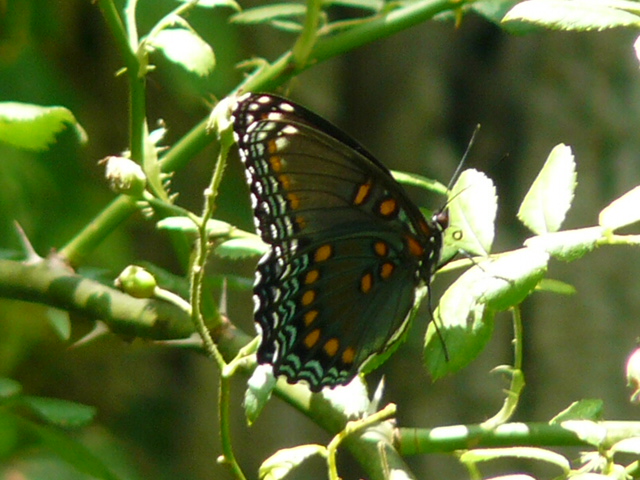 So what have I learned?  My apologies to those of you who are already way ahead of me in this facet of natural history, but, until recently I was unaware that: 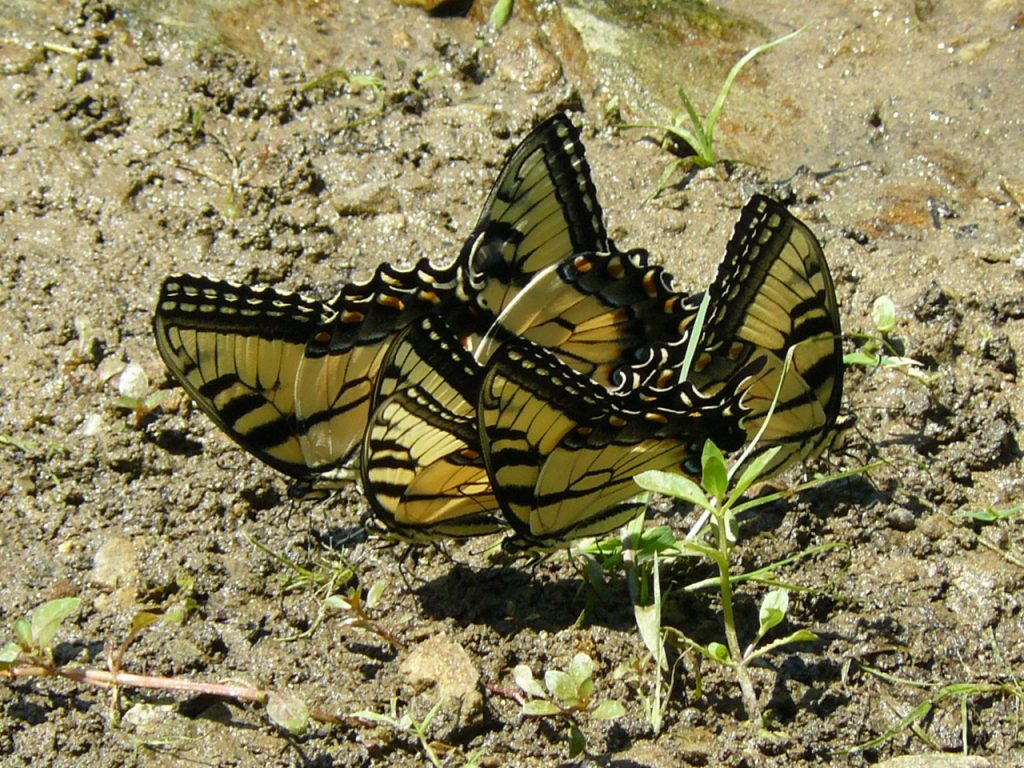 To provide a little background, let’s break down the major differences between butterflies and moths:

Until recently, my impression of moths was that they were small, drab, and relatively uninteresting–the ‘goth’ cousins of the more flamboyant, attention-drawing butterflies. Well, that has suddenly changed; one could say that I’ve had a metamorphosis! And it was because of a very unlikely random encounter. Last weekend I was collecting data for the MD/DC Breeding Bird Atlas near Irvine and stopped along busy Owings Mills Boulevard, of all places, to investigate a pair of N. Rough-winged Swallows that were nesting under the bridge that passes over the Gwynns Falls. Maybe ten steps south of that bridge, I almost stepped on this stunner at the edge of the sidewalk: 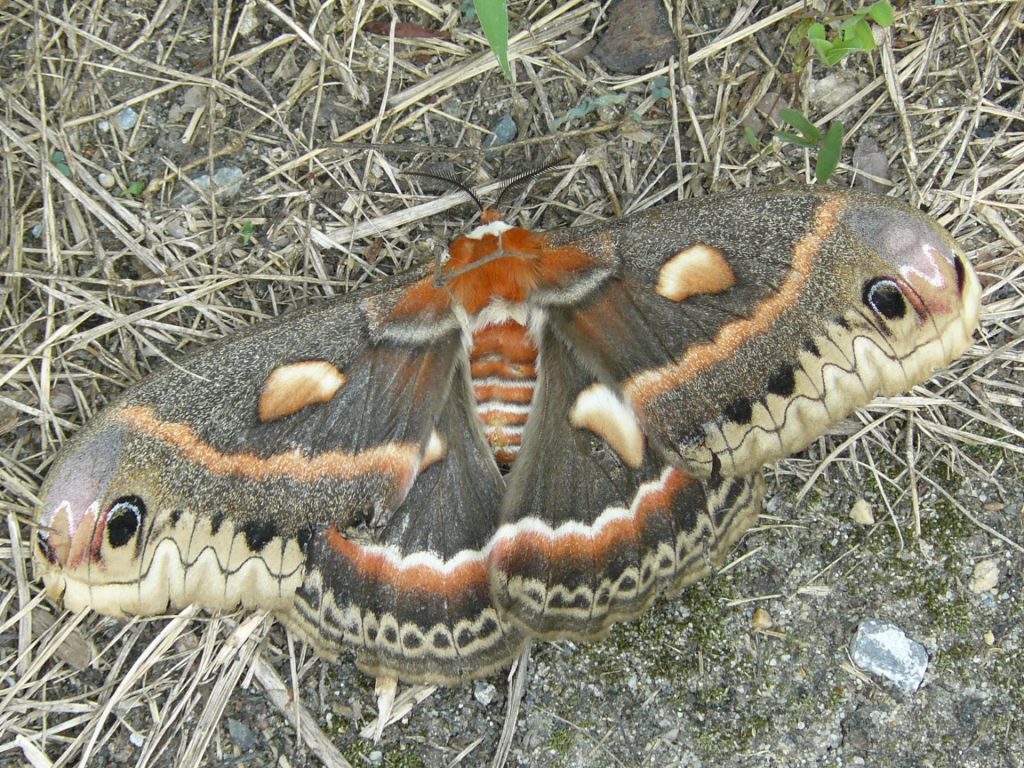 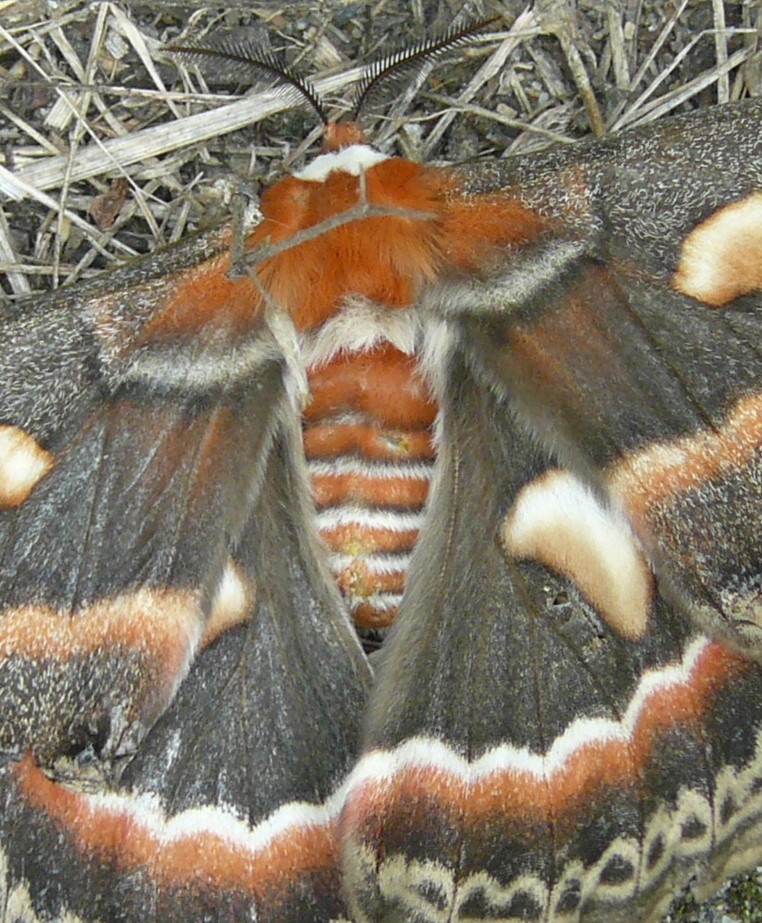 Sadly, it was no longer alive.  If it had been hit by a car on that busy four-lane road, there was no visible damage. It was breathtakingly beautiful, perfectly intact, and HUGE! When I picked it up, its wingspan stretched the entire length of my hand. Thanks to my recent education from Jenna et al., I recognized it as a Cecropia Moth, a few of which we raise each year in our Butterfly House. I had seen them before, but never in the wild. Truly a thing of beauty, the Cecropia makes an immediate and lasting impression. It stands out in so many unique ways–its fuzzy orange, white, and black tiger-striped body, the predator-deterring eyespots, those wonderful antennae . . . all in a moth that is the hefty size of a sparrow! With my newfound specimen in tow, I just had to learn more when I got home.

Turns out the Cecropia, one of the four most widespread species of Giant Silk Moths in the eastern U.S. (the others are the elegant Luna, the Polyphemus, and the Promethea) is the single largest species of Lepidopteran in North America. Females, which ‘mine’ was, are recognized from males by their larger size and their relatively thin antennae; the male’s are at least twice as broad and used to detect the pheromones emitted by the female. Amazingly, these chemical signals can be picked up by males up to a mile away, who immediately follow the scent, with single-minded purpose. These spectacular insects are purely mating machines. They overwinter in silky cocoons only to emerge as winged beauties whose lifespan is limited to only one to two weeks. All of their energy (stored lipids from their larval stage) goes to finding a mate and laying eggs for the next generation. In fact, Saturniidae have no mouths nor digestive system! They do not eat nor drink at all. 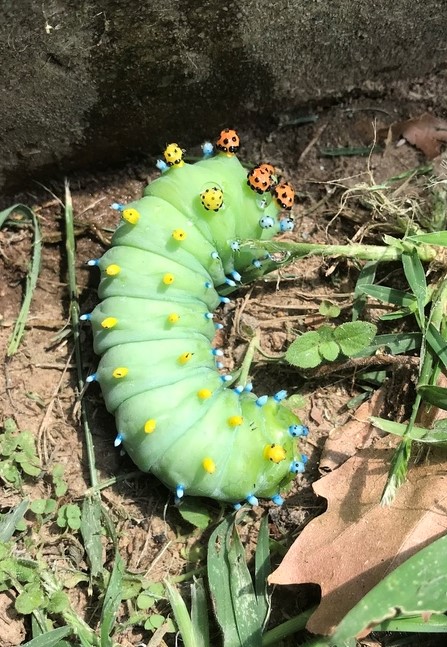 As if that tale isn’t strange enough, Cecropia caterpillars (in fact, the larvae of all giant silk moths) look like something out of a science fiction movie!  With green bodies covered with yellow, red, and blue knobs of various sizes, they are other-worldly enough. Throw in their striking size (4-5 inches in length) and the short spines emerging from those colorful knobs, and one could not imagine a more alien-looking larva. What predator would be brave enough to order that off the menu? Needless to say, it would not go down the gullet as smooth as silk!  (Pun intended.)

I was saddened, although not at all surprised, to learn that these superb insects are slowly on the decline. Not all that common to begin with (for context, the Maryland Moth and Butterfly Project on iNaturalist currently has 51 documentations of Cecropia; by comparison, there are over 2200 records of E. Tiger Swallowtail and almost 1700 entries for Monarchs), Cecropia Moths seem to be parasitized by the very tachinid fly that was imported from Europe to help control gypsy moth populations. Pesticides and light pollution also take a toll.

‘My’ Cecropia has been added to Irvine’s small collection of Lepidopterans. I’m grateful for all that she taught me, in my quest to learn more about her very short time as a moth. As one who has always demanded to know the reasons behind things, I am left with one burning question . . . if the ‘mating game’ of Cecropia Moths is all built around airborne pheromones, why did evolution lead to such a stunning appearance? If the tiger stripes, the bold wing patterns, the exceptional size don’t play any role in attracting a mate, what is their purpose? Something with such spectacular good looks, but which has nocturnal habits and lives only ten days, seems like a waste! Who or what gets to appreciate the lovely Cecropia?  Well, at least I did. And I’m definitely wiser for it. 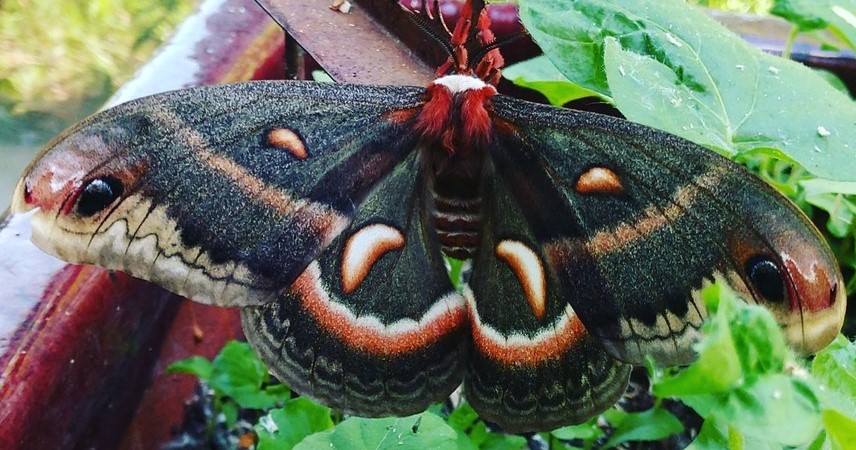 Photos courtesy of Laura Bankey, Diana Roman, and myself.    –BR