For many of us, November is a month of giving thanks, and when our thoughts turn to turkey it is usually in regards to a delicious dinner! But this interesting bird has recently become a fascination for many modern birders after a rather troubled past in this state. 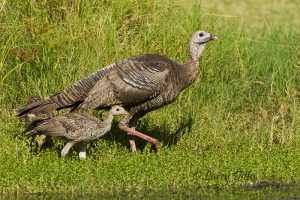 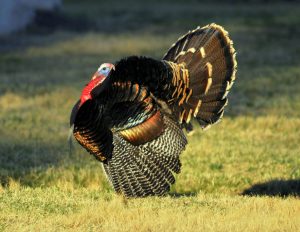 The wild turkey is found in every county of Maryland, with a current established population of around 30,000 birds. In the early 20th century, however, these birds were nearly extinct from the state. Over hunting and the major deforestation of much of Maryland between the late 1700s and early 1900s resulted in a huge decline in their population. By the time people took notice of the problem, turkeys were restricted to secluded parts of Allegheny and Garret county.

There were several attempts over the past century to replenish the turkey throughout Maryland. In 1920, turkey hunting was prohibited in Garret county to promote the natural growth of the population. Ten years later, Maryland began a program of raising turkeys and releasing them into the wild. Unfortunately, these farm-raised turkeys were not well adapted for survival  facing natural weather and predators, and the program saw very little success.

In the 1970s, a trap and transplant program was started using a “rocket net” that was shot out over feeding wild turkeys. Once they were captured, they would be tagged and released in suitable habitat elsewhere in the state. The entire program was funded by the revenue from hunting license sales and The Pittman-Robertson Fund, which gains revenue from the tax on ammunition and firearms used for sport hunting.

After 30 years, the trap and transplant program ended in 2001 with successful populations established in every county in Maryland. Today, hunters and birders alike can once again enjoy this native bird in its natural habitat.

Last year, the first wild turkey to be recorded at Irvine was spotted–twice! We have high hopes that with increasing populations across the state, more of these birds will find their way to our property and flourish.