Call of the Wild: Coyotes at Irvine! 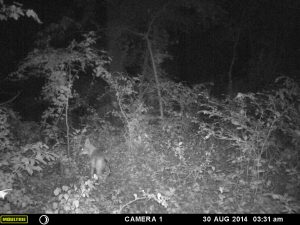 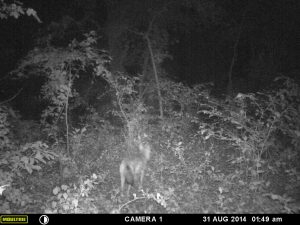 At the end of August last year, the first official images of an incredible and elusive animal were captured by a trail camera on Irvine’s property–and surprisingly, not too far from the actual nature center building!

For the past few years, nature center staff and guests have been finding evidence of coyotes on the property, such as scat and carcasses leftover from meals. And those who are willing to stay after dark for a camp out or program are often treated to the sound of a chaotic uprising of yips and howls, the characteristic call of these canines.

Seeing actual photographs of the animals brought a new sense of excitement! These images were captured only about 150 yards from the building; originally, it was thought that the coyotes preferred to roam the lower meadow and neighboring farm land–areas less frequented by visitors. But more recently, staff members have reported first hand sightings of the coyotes, meaning they are adjusting to our presence just as we are adjusting to theirs! 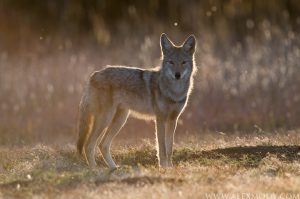 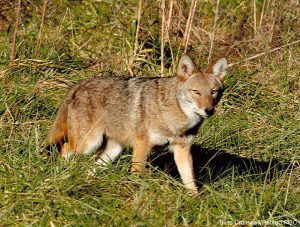 The eastern coyote is much larger than its mid-western and western dwelling relatives, weighing upwards of 30 to 50 pounds, and first started to appear on the east coast during the 1930s.

Since then, it has expanded its range to cover most of the eastern United States and southeastern Canada. It is now believed that the eastern coyote is a genetic hybrid–a mix between the western coyotes and wolves! Evidence of this is seen not only in their DNA, but also in their behavior. Eastern coyotes tend to have a larger range than their western cousins, around 10 square miles, and they are more social as well, often living in small family groups.

It is not surprising that coyotes have found their way to our area; they have proven to be one of the most adaptable predators around, living not only in open wild spaces, but in suburbs and even the outskirts of big cities. Even with the recent sightings, visitors should not feel alarmed–the coyote seems to go out of its way to stay unnoticed, and will most certainly make a quick retreat if stumbled upon. Coyotes are thriving in our changing modern world, ever present but still remaining secretive. 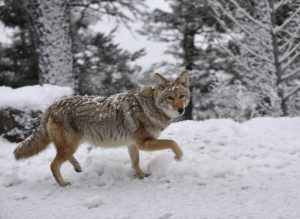